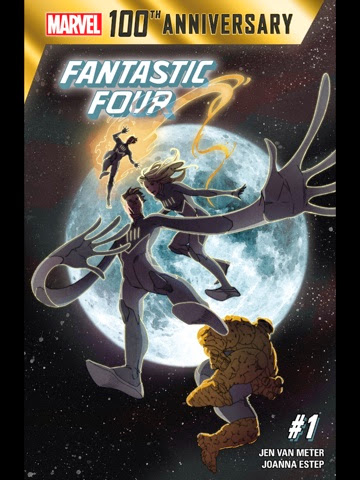 It’s the 100th anniversary of Marvel Comics, which means it’s the 100th anniversary of the Fantastic Four.
OK, it’s not quite 2061 yet, but this comic imagines what our grandkids – or more likely, us, pickled heads in a cryogenic crockpot – will be reading then. The Fantastic Four is no longer Reed Richards, Sue Richards, Ben Grimm and Johnny Storm, it’s Trin Richards-Banner, Kirby Richards-Banner, Victoria Harkness and Lee Minh Cam aka Fantasm, Slip, Enchantress and the Human Torch. An intriguing recap page reminds us of what happened to the team most recently – a fair bit of young love, apparently – before the story begins.
And the story begins with a flashback to five years previously, in which we see how the original Fantastic Four were pulled apart. Galactic Command, tired of the team’s treating the timestream as their personal playground, wiped Reed, Victor Von Doom, Johnny and Franklin off the face of the universe. The Thing, meanwhile, was captured.
Today – like the FF, it’s all relative – Valeria, a grown woman and mother of Kirby and Trin, has received a puzzling message from big brother Franklin. And the kids witness an equally enigmatic plea from ‘Grandpa Reed’. Soon the young Fantastic Four are in big trouble and there’s only one person who might help Valeria solve the mystery and save her proteges – the Invisible Woman, who has been placed under house arrest by the authorities. 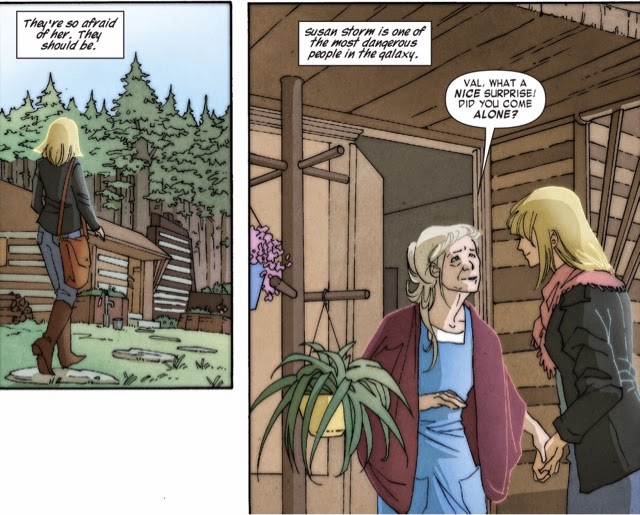 This is a terrific treat of a comic from the stable of editors Nick Lowe and Emily Shaw. Writer Jen Van Meter and artist Joanna Estep imagine how Marvel’s first family might develop over the next few decades. Comic book ageing means that while the original team members aren’t in their second century, things have moved on a few years. So it is that we have a third generation of cosmic ray-powered heroes, a Sue with new tricks, an adult Val married to one Bart Banner – not present here as he’s off having an adventure with dad Bruce in Gamma Girls #251 – and her godfather Dr Doom, integrated into the extended family. Little references to the ongoing storyline add spice to a sharp chapter which sees the band get back together, and I’m rather pleased that we’re apparently getting a sequel in the upcoming Guardians of the Galaxy 100th Anniversary Special.
And there’s a huggable, final page summation of the Fantastic Four’s core appeal.
Joanna Estep, providing sumptuous full-colour illustrations, evokes a Marvel Universe with a different tone, but not one so alien as to be unrecognisable. Her elder FF are nicely on model, while the new kids are pretty darn adorable – I can’t wait until they make their comics debut in about 20 years. 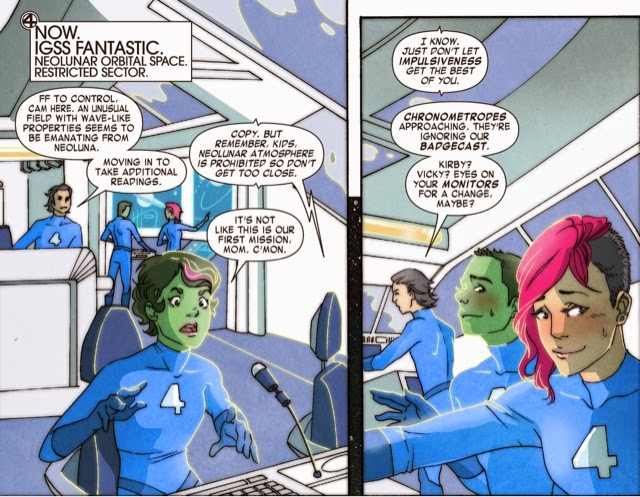 Perhaps before that Marvel could reunite Van Meter and Estep on another book; the Fantastic Four is sewn up, but I can see the pair acing a new Power Pack mini-series. For now, though, you can bet I’ll be looking out for more of these 100th Anniversary specials.