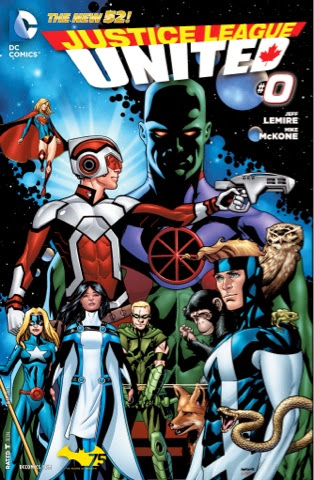 I haven’t got a girlfriend in Canada, but I do have a superhero team – Justice League United. From the maple leaf In the logo, to the final page shot of one of the most striking members, I loved this book. It has everything I want in a JLA series – a rich mix of characters, a storyline with scope, striking art and huge potential.
Starting fashionably in media res, we join Animal Man, Stargirl, Green Arrow, Supergirl, Martian Manhunter and Adam Strange invading an alien lab where dodging dealings are a-doing. They’re there after anthropologist Strange approached Animal Man and Stargirl at a public appearance in Toronto three days earlier – it seems that post Forever Evil the Justice League has fallen on tough times – to plead for help. His grad student and girlfriend Alanna Lewis has been spirited away by a beam of light, and he doesn’t know what to do.
Of course, the heroes go with him to the site of the disappearance, and excitement and mystery ensues.
Meanwhile, on Canada’s Moose Factory Island, Miiyahbin Marten proves she’s not your average teenager when dark, mystical forces invade her home. 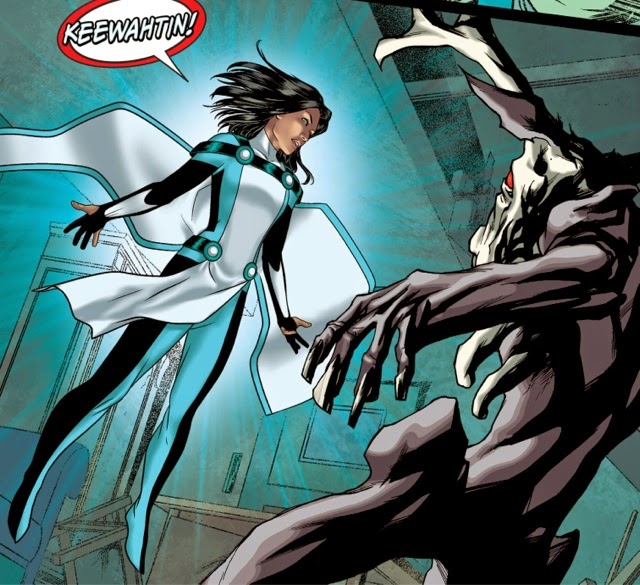 By the close of this unnecessarily numbered zero issue, we’ve not caught up to the beginning, but we have gotten a nice chunk of story, some great interaction between the heroes (Animal Man, especially, benefits from escaping his recently ended series, where it was all-misery, all the time), an unexpected cameo and the kind of fun, anything can happen superhero vibe most DC books have been missing since 2011’s line-wide relaunch. 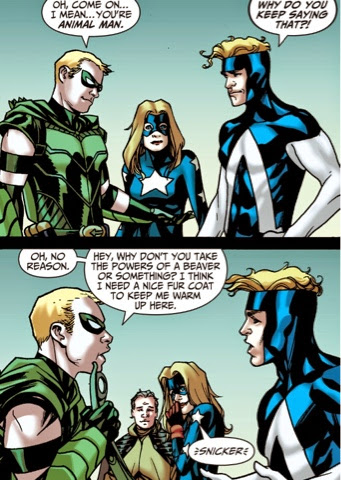 Jeff LeMire’s script is his most enjoyable DC work since he was writing the adventures of Superboy pre-New 52. It’s obvious he loves old DC lore and he looks set to provide some rollicking League adventures. The much-trumpeted new character Equinox – that’s the aforementioned Miiyahbin’s superhero name – makes a fine impression, and I can’t wait to see her meet the team.
Supergirl, while in the opening scene, hasn’t shown up by the end of the extended flashback, which is a shame as I was hoping for clues as to how her Red Lantern journey ends. It’s almost as if DC is trying not to ruin anything here … Seriously though, interviews with Lemire have me worried about how he’s going to approach Kara’s moods and I could do with some on-panel reassurance.
But that’s something for the future; for now, Lemire has aced it, producing a script that’s just flat-out fun – he even nods to the old days of DC by including the Encyclopaedia Galactica of Legion yore.

Mike McKone’s artwork is a joy to behold, his layouts story-friendly, the sense of place commendable, the figure and character work strong. First Nation heroine Mii – happily, we’re allowed to call Equinox that for short – has a wonderfully non-cliched look, and given that we know her powers change with the seasons, I’m keen to see whether her clothes alter hue too.
Oh look at me, speculating on trivia! That’s a good sign. Mind, I also have a complaint that some would call trivial – Alanna’s look. In DC’s laudable attempts to provide a diverse range of characters, Alanna’s appearance has changed along with her background. And while the new Alanna is a good design, the original space heroine is one of my favourite characters of the Silver Age, and now she looks most unlike herself. And I’m pretty sure I’d be saying the same thing if I’d lived a lifetime with the new Alanna, and suddenly she was a sleek, jetpack gal. If you’re bringing in classic characters, don’t make them unrecognisable – add diversity as new folk are introduced, a la Mii.
No complaints about Alanna’s character, though – she’s as plucky and bright as ever she was. 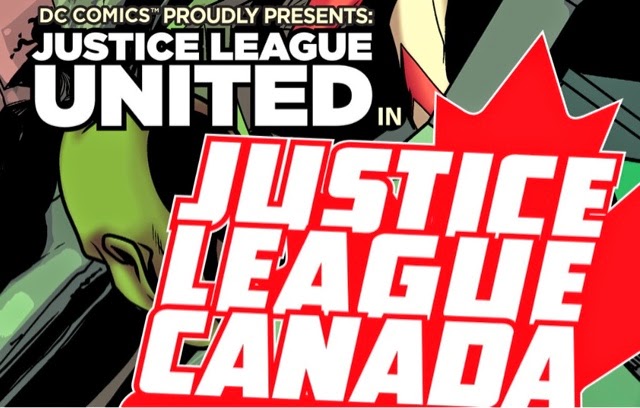 The colours by Marcelo Maiolo are great, naturalistic for Canada, eye-popping in the otherworldly scenes. And Carlos M Mangual’s letters are clear as day; I don’t know if he’s responsible for the story title lettering, as it could well date from when this book was going to be Justice League Canada, but I love it, Sixties-style font and all.
Oh, and in case you were wondering, Lemire gets his poutine reference out of the way on page 8.