It’s a day in the life of Stormwatch. The real Stormwatch, the team who bumped the first New 52 version out of continuity having been themselves despatched. Where, I don’t know, as I jumped off the book around the time they arrived with writer Jim Starlin. Throwing out the entire cast of an under-performing book was a kick in the teeth to those of us who actually liked it.

I’m apparently not the only one who jumped ship, as the book is being cancelled as of this issue. As is my habit, I’ve jumped back on an outgoing series to see how things wrap and it is my bittersweet duty to report that this comic is sheer pleasure from beginning to end.

(I almost wrote ‘magnificent’ but have decided to dial down what may seem like hyperbole, in case you stop listening; but secretly I know – Stormwatch #30 is magnificent.)

Starlin has left the building – or perhaps that should be the Carrier, the renamed and revamped Eye of the Storm. Sterling Gates steps in to close proceedings and gives us a day in the life issue. The returned members are getting back down to business – saving Earth from extraterrestrial incursions on the QT and checking their defences are up to scratch. The issue begins with old married couple Midnighter and Apollo smashing an alien nest and the Engineer getting to know the carrier in her unique way. 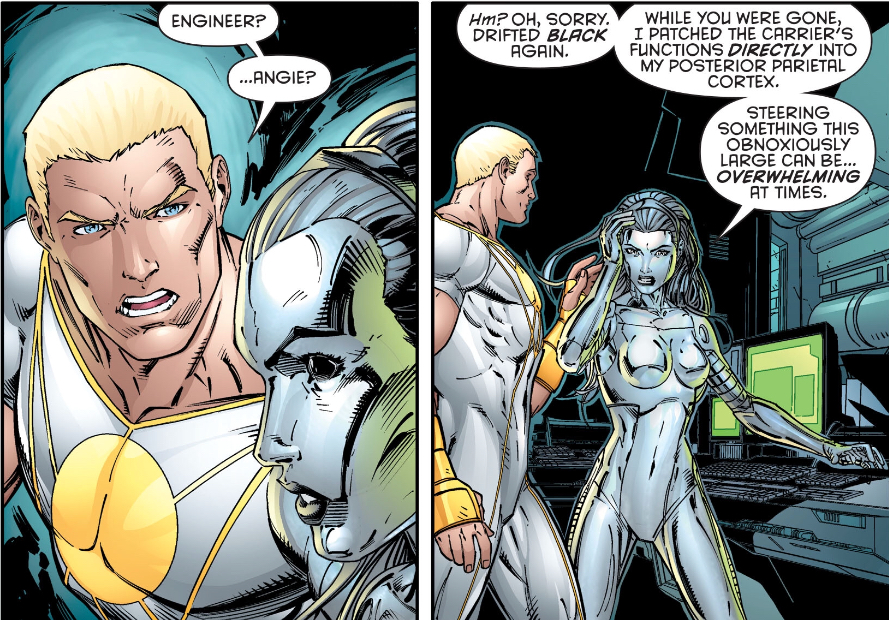 It’s not all work, with Jack Hawksmoor taking a much-needed break and the 14-year-old Jenny Quantum on her first date.

Jenny being a superhero, the date is curtailed by an emergency, one that reminds us just what the DC Universe should be – big and bonkers and endlessly entertaining. 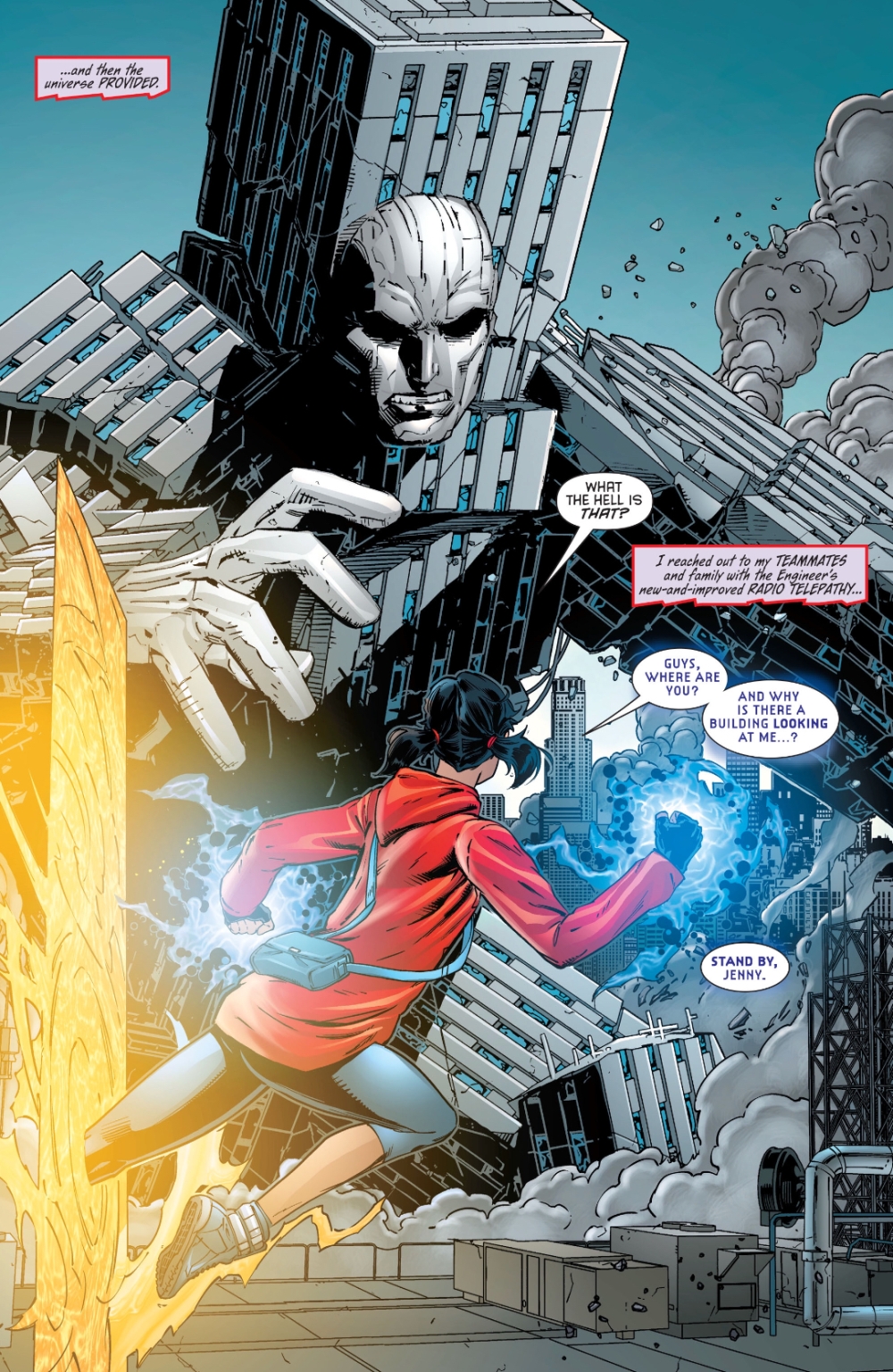 There follows a fun sequence as Stormwatch literally fights City Hall – Gates’ gag, not mine, sadly. Jenny narrates, reintroducing her ‘adopted family’ and reminding us of their abilities even as we see them used more efficiently than ever. I love the notion of Midnighter as ‘fight architect’ and there’s a neat wrinkle with Jenny’s ‘century baby’ nature which I believe is new. Former member the Projectionist also comes back into play, demonstrating her massive usefulness to a clandestine organisation. 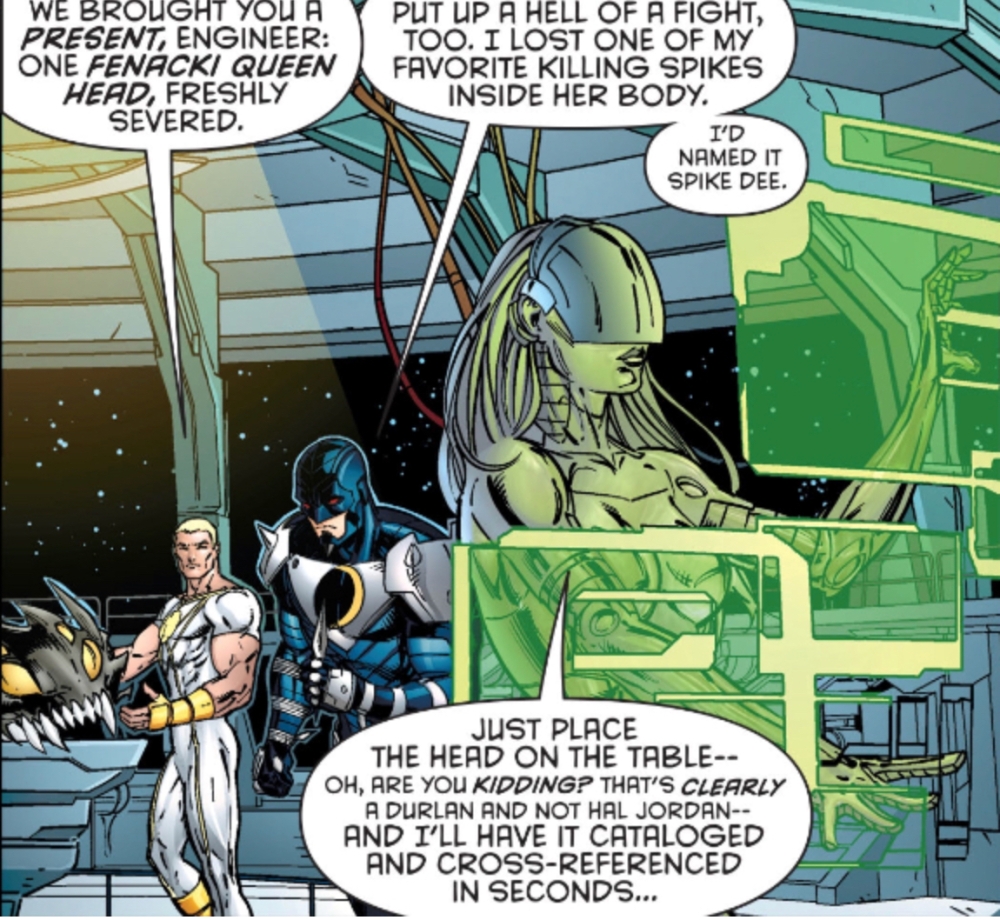 Gates ties the book into current DC continuity, showcases the personalities of the players – who knew Angie was a trophy hunter? – and positions the team for the future. Cleverly, he explains why Stormwatch may disappear from the DC landscape, while producing a fantastic pilot for a new series. This is what Stormwatch do, this is who they are … and this is why you really want to see more of them.

Many a writer would have knocked up a fill-in to close a series with which they had no particular link, but Gates brings the equivalent of a two-issue story. There’s a huge amount going on, as Gates – a madly talented, committed writer who deserves to be assigned a sure-thing series by DC, a Bat, GL or Super-book – goes all out to give the reader more than value for money.

Partnering Gates is Jeremy Roberts, who won DC’s Harley Quinn Talent Contest and, on this showing, thoroughly deserved to. As he choreographs the characters’ final fling with pencils and inks, his crisp lines and intelligent storytelling make every page a treat.

I particularly ike his Jenny Quantum, who resembles a young Donna Troy, and his way with giant buildings reminds me of the kind of menaces the original Doom Patrol would face. Crucially, Roberts isn’t overwhelmed by the many-panelled pages Gates’ script requires.

The well-judged. beautifully applied colours of Tanya and Richard Horie also add to the mouth-watering picture, while letterer Rob Leigh gets a chance to shine with the likes of Jenny’s Dear Diary sequence.

Roberts also provides the outstanding cover, even colouring it – if DC editors don’t have an assignment in place for this fella they need their collective heads examining.

And if the higher-ups – no, not, the Shadow Council, Dan Didio and co – have anything about them, the minute they saw this book completed they’ll have ordered a special from the same creative team, followed by a full-on relaunch. Call it Volume 2, call it .Now, whatever … just don’t let one-time Wildstorm winners Stormwatch miss their best chance to become a hit at DC.