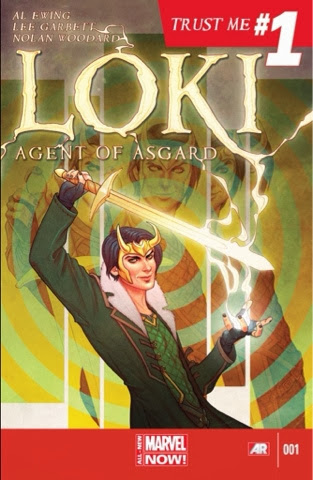 When you’re the god of mischief, it helps to be all things to all men and that’s what Loki pulls off in this debut. Most obviously, there’s movie Loki, the Tom Hiddleston-type who melts legions of female hearts. There’s Journey into Mystery Loki, acutely aware of the power Story holds over the Norse gods. And there’s traditional comic book Loki, not so much a trickster as pure evil.
They’re all present in a story quickly establishing this book’s raison d’être – the redemption of Loki. Maybe. Wanting to escape the prison he’s built for himself by playing the villain to Thor’s hero, Loki becomes the agent of Asgard’s All-Mother. The nature of his first operation on Midgard isn’t apparent until the close of this done-in-one, but it involves a visit to Avengers Mansion, where a version of the team familiar to film fans is having a rare night off.
Loki has history with the Avengers, a previous version of him having sparked the team’s formation, which makes for interesting interaction with Captain America, Hawkeye, Black Widow, the Hulk, Iron Man and, of course, Thor. Hawkeye greets the new-look Loki with a crack about One Direction, but it’s more a case of misdirection as he wrongfoots Earth’s Mightiest Heroes on the way to mission success. 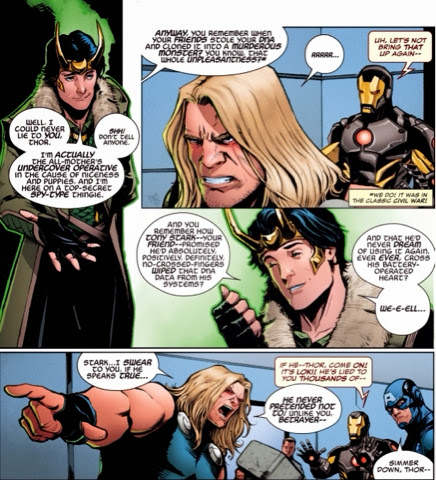 By the end of the book, we know more about what makes Loki tick, but we’re a long way from understanding him completely – JIM writer Kieron Gillen made Loki fascinating in a way he’s never been in his long history as a Marvel mainstay, and Al Ewing continues the great work here. Loki is smart, a risk-taker, funny (will non-Brits get the ‘slash’ gag?) and of course, very, very manipulative. And he’s incredibly entertaining, dominating the action while leaving me wanting more. Heck, I can even stand him rIffing on Wicked. 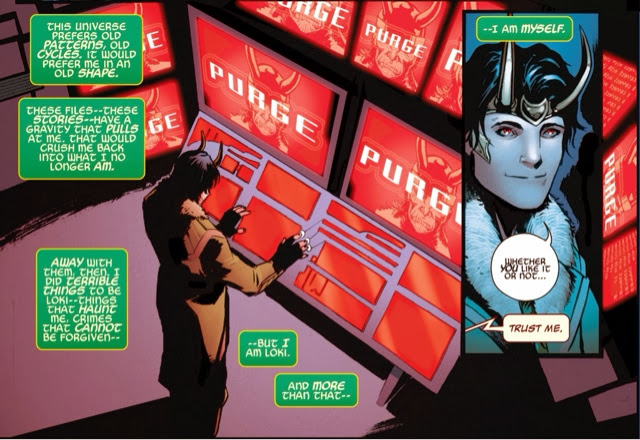 I’m not sure about how serious Asgard’s second son is about wanting redemption, but whatever he’s up to, I’m happy to watch. In a conceit reminiscent of DC’s Phantom Stranger series, the All-Mother will wipe one crime from the record for each good deed he does, ‘New legends for old’. This first is a rip-roaring tale that uses ancient and recent Marvel history to produce the spellbinding tale Loki deserves.
The visual magic comes from the hands of Lee Garbett, who might have been selected by Loki himself, so instinctively does he understand storytelling. Whether he’s asked to draw the gloomy halls of Asgard, the corridors of Avengers Tower or Loki’s luxurious shower, the former Batgirl artist delivers. And he doesn’t just set the scenes well. Garbett plays them out beautifully, presenting the action and emotion with élan. Nolan Woodard’s subtle colours enhance the art, while Clayton Cowles manages to remember who gets olde worlde font and who says it straight.
Jenny Frison’s cover is splendidly composed and well-rendered, but her Loki is a little too epicene for me.
But that’s nowhere near a fault in a mainstream comic as brilliant as you could wish for. Editors Lauren Sankovitch, Jon Moisan and Wil Moss have wrangled some superb talents here, talents worthy of a god