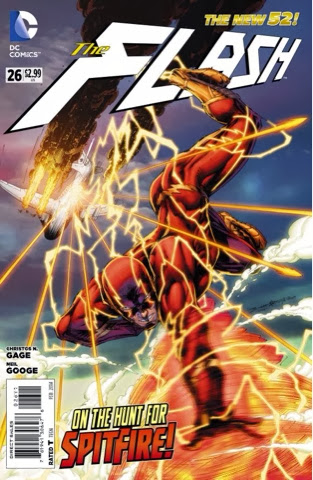 One of my favourite stories from Wally West’s time as the fastest man alive was ‘Nobody Dies’ from his 54th issue. A great little standalone by Bill Loebs, Greg LaRocque and Jose Marzan, it features Wally leaping out of a plane after a falling stewardess, then having to work out what the heck to do to save them both. When this fill-in issue of the New 52 Flash was announced, solicitation details had it sounding like a take on that 1991 tale.
And first impressions of Christos Gage’s script did have me thinking of Wally, with the opening ‘My name’s Barry Allen, I’m the Flash, the fastest man alive’ line, and the setting of Wally’s hometown, Blue Valley. Was this, in fact, a repurposed Wally script that’s been sitting in Gage’s bottom drawer?
Reading on, the answer seems to be No, with Barry’s forensic knowledge and girlfriend Patty Spivot figuring into the action. The story has Barry chasing a villain named Spitfire after she murders an old friend of his – no one we’ve ever heard of – and steals deadly disease samples to sell on the black market. For Spitfire, the challenge is as important a factor in planning a crime as the prize, and she’s having a wild time switching from helicopter to plane to personal wings. The Flash, though, proves more than she bargained for.
As with the Wally story, we have the hero dealing with a fall to Earth from a great height by using super-speed in inventive ways. But then, any good Flash tale approaches the incumbent’s powers with a fresh eye. Gage does a splendid job with that aspect, and his revival of the Silver Age ‘Flash Facts’ brought a big grin to my face. Spitfire – a new take on Golden Age Green Lantern baddie Sky Pirate – is meant to be a thrill seeker, but her incessant manic grinning is a bit much.
That apart, Neil Googe does a good job on the art, giving Barry a pleasing determination and making both super-speed and regular-paced action convincing. Wil Quintana’s colours are at times a little washed out, and not just in the flashback scene (a comic and screen convention I’ve never been fond of). Sal Cipriano doesn’t have an opportunity to get creative with the lettering, but what he does do is good. As for Brett Booth’s cover – inked by Norm Rapmund and coloured by Andrew Dalhouse – it’s nicely composed but far too busy, with all the electricity zapping around Barry muddying the visual.
As a fan of Gage and Googe – never mind how much fun the names sound together – I’d love to see what they could do given free reign with this title. For now, though, they’ve produced a smart, diverting time-passer I can easily recommend.
But darn it, I still miss Wally West. 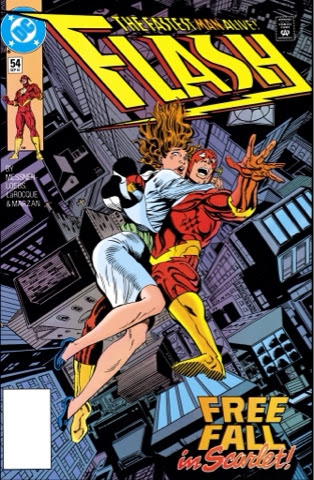