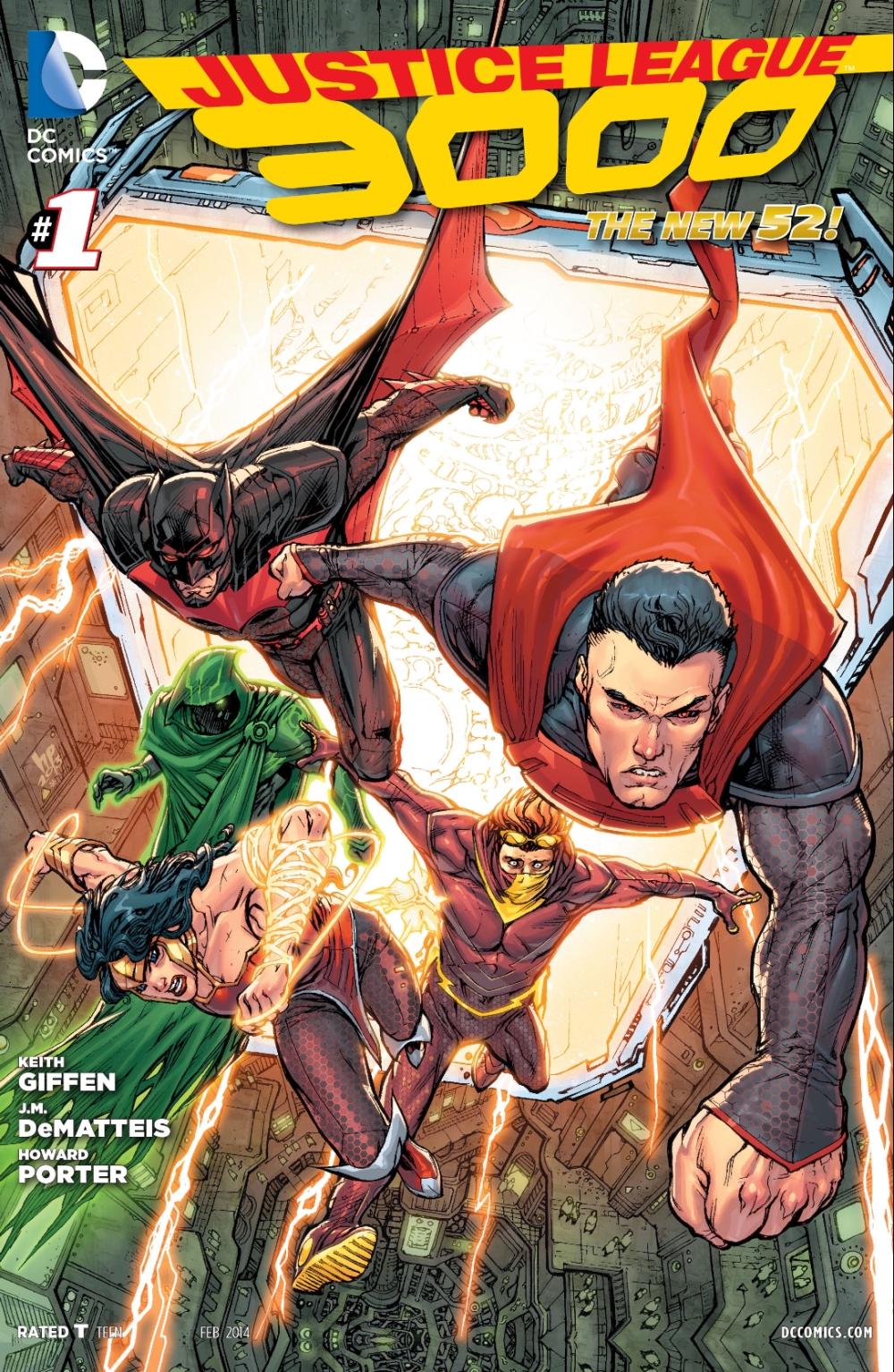 It’s the 31st century – do you know who your heroes are? Here’s Superman, Batman, Wonder Woman, the Flash and Green Lantern, the Justice League, reborn to deliver paradise back to the people from whom it’s been snatched away. But do they have what it takes? Some of the superbeings we meet in this debut issue seem as likely to cripple one another as restore peace and harmony: Batman and Superman hate each other and Wonder Woman is pure Amazon rage. The Flash is unnerved by these three, while Green Lantern lacks the control of green energy he once had.

‘Once’? Yes, this is Clark, Bruce, Diana, Hal and Barry – and yet it’s not. Recreated from cell samples kept for 1000 years by project Cadmus, they lack many of the motivations, and all of the direct experiences which made the 21st-century originals the heroes they were. So Superman and Batman know ‘they’ were once best friends, but certainly don’t feel it. The Flash has super-speed, but not the aura which protected him. Diana hasn’t even a semblance of humanity. And Hal’s energy isn’t Oan, so lacks finesse.

But they want to do the job for which they’ve been brought back – heroic drive or scientists’ programming? They certainly don’t know, but teen industrialists Teri and twin brother Terry, who oversee the Justice League project, do. A complicated pair, the so-called Wonder Twins of Cadmusworld are looking out for the greater good – while considering killing the originator of the project, Ariel Masters. Their former mentor, she’s now on the run in the hellhole that is Bradbury 7 on the Hanuman system.

The physical action this time sees the League out to stop the possessed horde of the Convert, one of the five who transformed the near-perfect Commonwealth of worlds to a collection of war-torn, poverty and disease-ridden planets (click on image to enlarge – and dig that hideous Wonder Woman). 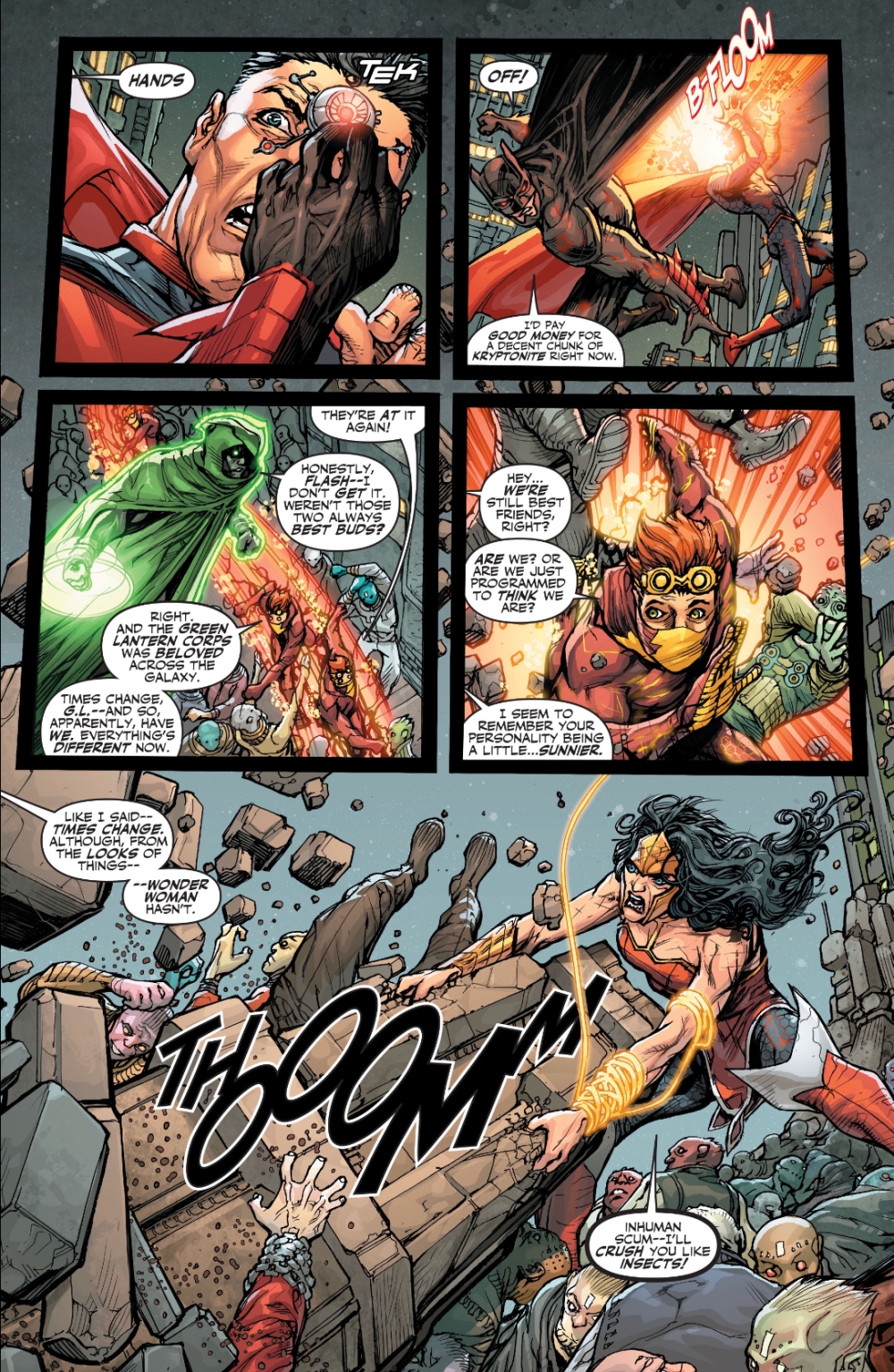 It’s good, as we see what the members can and can’t do, but the emotional action is better. The highlight of the issue is a pair of pages in which the members are debriefed by the off-screen twins (and what’s the betting they’re not natural twins, but Cadmus clones), and we get a good look at their personalities. It’s a deft scene from plotter Keith Giffen and scripter JM DeMatteis, sharply drawn by Howard Porter. While these pages look to have Giffen breakdowns – tell me that’s not a Giffen head on Hal, below – it could be that Porter was a fan of Giffen’s Five Year Gap Legion of Super-Heroes, and he’s channelling the approach there. 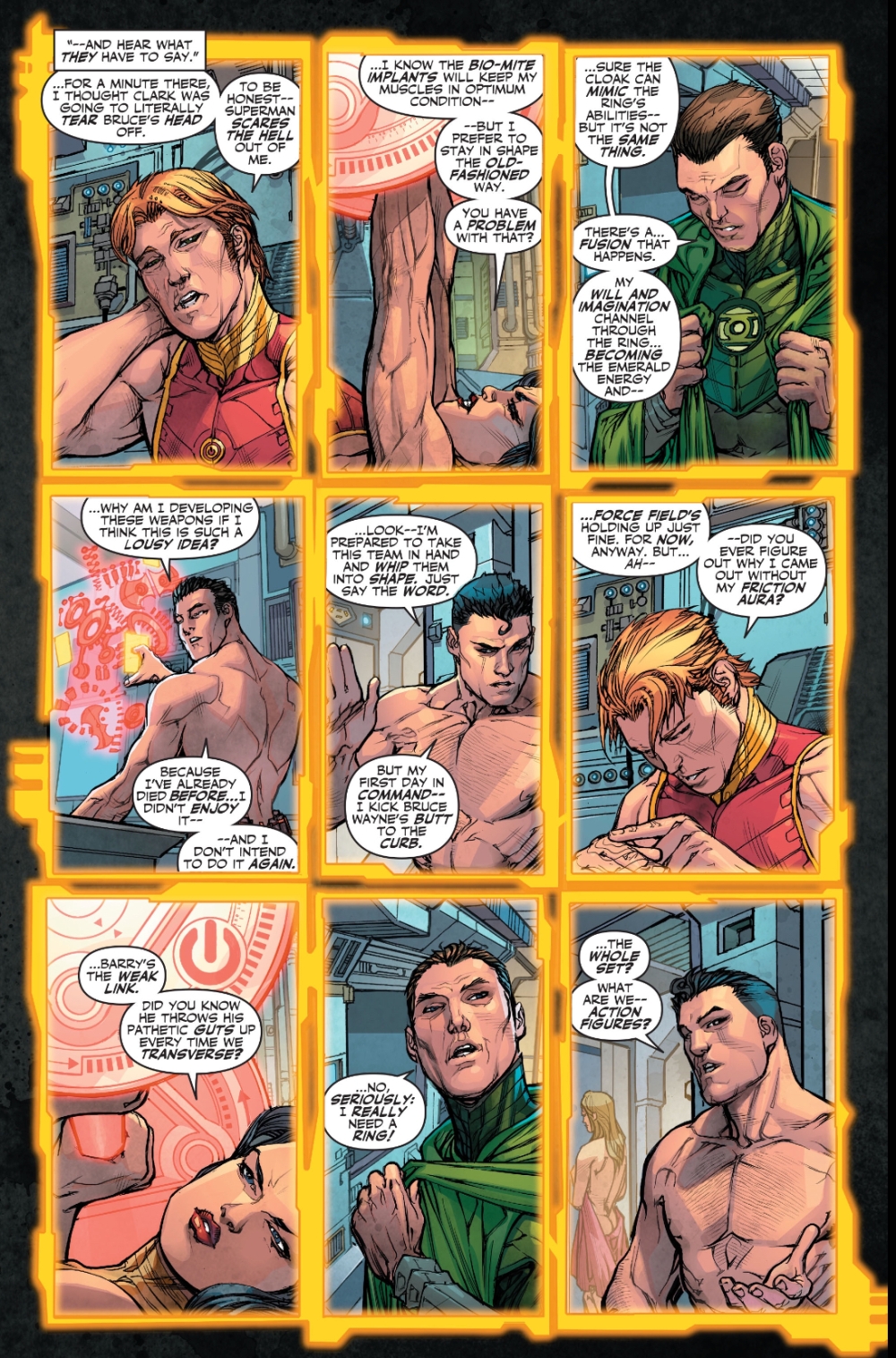 Whatever the case, Porter acquits himself well throughout the book, depicting a future that’s dark, but not off-puttingly so. I want to spend time here, exploring its avenues, getting to know the people. I’d avoid the weird vermin, though – the mechanical birds and bugs of Cadmusworld are rather more appealing, even though there’s likely as much nastiness behind the antiseptic glitz as on the Hindu-referencing Hanuman planets.

The visual aspect that’s not appealing is the costumes. Batman looks too Beyond. Superman has a clunky shield and the stupid scales of his big screen counterpart. Wonder Woman has a loincloth that recalls a nappy and a tiara that looks to be choking her. Flash has goggles he doesn’t pull over his eyes and a daft Wild West neckerchief. And Green Lantern is a floating blanket.

All of which can be tweaked. My takeaway from this opener is that Giffen and DeMatteis – the writers behind the hugely successful Eighties JLA revamp – have done it again. We’re in a dystopia, but things aren’t relentlessly grim – the League is here to turn the lights back on, and I’ve no doubt there’ll be a bit of comedy along the way. The main thing is that unlike many of DC’s New 52 books, Justice League Beyond gives the impression of having a well-worked story to tell. Other books ladle out incident on the fly, but distanced from the 21st-century DC Universe, the creators here are free to go their own way. References to such classic concepts as Jack Kirby’s Great Disaster and Cadmus are intriguing nods to old continuities, but won’t necessarily play out as previously.

I thank Giffen and DeMatteis for having the confidence to set out the story in their first chapter – too many comics these days rely on ‘mystery’ to keep us buying. But we’re told that, yes, these are the original heroes, sort of, this is their mission and this is why it won’t be easy.

(Mind, I’m not convinced that this is in fact a reborn Barry Allen – he had blue eyes and blond hair, this Flash has green eyes and ginger locks, like a certain Wally West; did someone at the lab mislabel a Petri dish?)

The elephant in the room is the Legion of Super-Heroes – where are the 31st century’s greatest super-teens? I don’t have a Scooby. Do they exist on Earth, which we’ve not seen yet? There’s no inkling of their existence here, so far as I can see. And that’s fair enough – I want the LSH to return as their own thing, perhaps in a different version of DC’s future. They’ve already done the ‘freedom fighters in a dark universe’ bit in Giffen’s aforementioned Eighties book. Let’s see if the all-new, all-old Justice League can do as well.