Last month it was revealed that Steppenwolf’s murderous henchman Brutaal was in fact Earth 2’s Superman, not dead after all, but transformed into a killing machine by Darkseid. This issue he cuts a swathe through the World Army, forcing the superheroes to retreat to its Arkham base. There, General Sam Lane awakens a new hero, the Red Tornado – a robotic body housing the mind of his dead daughter, Lois. 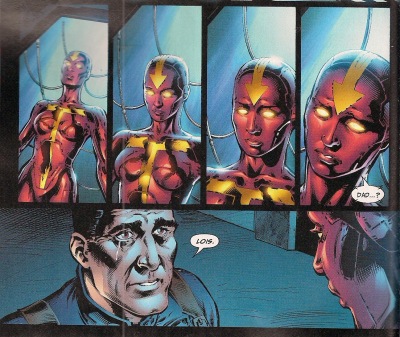 (I suspect this is meant to be a tender moment, but I find it a terrible combination of creepy and tragic.)

With Superman now outside the facility and rending his guards limb from limb, Lane sends top soldier Sonia Sato to the lower levels where the dead Batman’s enemies are kept in stasis. If Superman nears them, Sato is to turn off life support, denying him an army of criminals and madmen.

Criminals and madmen, though, are just what the situation needs, according to the new Batman, who has broken into the base and brutalised the good men and women he met on his way to the holding chambers. Elsewhere, Sam Lane dies in his daughter’s arms when Superman’s trouncing of Dr Fate causes Arkham to fall down around them. Fate survives only because the Flash whisks him out of the way before Superman’s jackboot can come down a second time.

Maiming, slaughter, hopelessness … Earth 2 manages to be a world even darker than the regular DC Earth which, for all its grimness, still finds room for the occasional 20 minutes of peace. Here, though, it’s all war, all the time. For a book supposedly centred on new versions of the shining stars of the Golden Age – Flash, Green Lantern, Hawkgirl and so on – it’s a dark, dark series. It began with Earth 2’s Superman, Batman and Wonder Woman dying heroic deaths, clearing the way for the heroes more identified with the Justice Society to grab the spotlight. Since then, though, we’ve had Wonder Woman’s daughter show up as a murdering harpy, another Darkseid corruption job. Then a new Batman turned up. Followed by a hideous Superman. And now, Lois, a horribly lonely figure, denied eternal rest for the privilege of seeing her husband made over into a monster and her father killed by him.

When writer James Robinson began this series I recognised the darkness, but expected things to get better month by month, as new ‘wonders’ emerged and reclaimed their world for the light. Instead it’s been one horror after another, with no sign of the Apokolips storyline ending. Robinson left the book last month but his successor, Tom Taylor, is gleefully telling USA Today of how much crappier things will get:

‘I actually feel kind of guilty about all the damage we’re going to do to [Earth 2].’

‘This is a much darker, much stronger, much more violent Batman driven by something else entirely. He is willing to do things Earth 1 Batman would never consider’

‘This is the beginning of the end of an Earth, and our characters will be dragged through hell’

Lovely.
Taylor’s debut is skilfully written, with pithy dialogue and an interesting puzzle introduced as Dr Fate babbles post-pummelling. What little we see of the Flash is great, he’s heroic and just the right side of cocky. The hawkish Sam Lane is nuanced to an extent rarely seen on the other Earth. And the art by penciller Nicola Scott and inker Trevor Scott is superb even when I can hardly bear to look at what it’s depicting – the people look spectacular, the storytelling is excellent, the action is well-choreographed. But all the craftsmanship on display (and that includes the work of colourist Pete Pantazis and letterer Dezi Sienty) is at the service of an ultra-violent, singularly depressing storyline.
I actually liked the idea that if Superman ‘had’ to be murdered by Steppenwolf to set up the series, he was at least joining his beloved Lois in the hereafter. But no, Superman is back and murdering the people he defended for so long, his S-symbol dripping blood. And Lois has to watch his legacy being sullied as she prepares to confront the love of her life in her new inhuman frame.
That’s Superman and Lois Lane, the foundational couple of the DC Universe, reduced to reanimated corpses set at one another’s throats.
Batman and Wonder Woman remain dead, so far as we know, but don’t be surprised if they turn up as baby-eating Hunger Dogs or senior citizen-mangling Parademons any day now. In the meantime, readers can watch their successors cripple and slaughter their way across the populace.
Me, I’m out. If I were less stupid I’d have packed this series in when Wonder Woman’s daughter, Fury, turned up but my optimistic nature had me thinking – or at least hoping – that things would improve. But they’ve gotten worse, and worse still is promised. This issue’s title, ‘The Dark Age Begins’, is a bit of a hint.
So I’m out. I want to support a JSA book, but this isn’t it. Call me when the lights come back on.