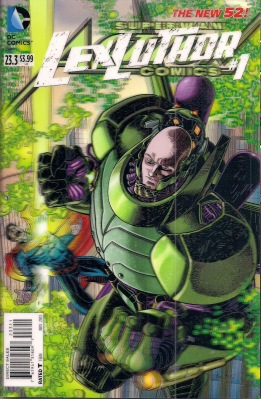 Superman’s greatest foe gets his own Villains Month special and … what, you thought he’d had it already? You must have read the Bizarro #1 issue, in which the focus was entirely on the bald bad guy rather than the imperfect duplicate.

Here’s the official Lex issue, featuring a story taking us from his recent appearances in the Superman series and leading up to the beginning of Forever Evil #1. We begin with Lex being released from the super-prison he himself designed, not by exploiting some back door, but via the power of lawyers. That’s surprising.

The rest of the book, less so. If you’re new to the Lex Luthor character you’ll likely enjoy this enormously; writer Charles Soule defines him superbly via a day in the life story showing just how ruthless he is in his dealings with a business rival, and his own employees. His long-range plotting is to the fore, we see how obsessed he is with Superman, and how little self-knowledge he has.

If you’ve been around a few years, and read a few Lex spotlights, you may find the main events here – meant to be surprises – a tad too predictable. The story apparently takes its cue from the seminal Lex tale of the post-Crisis era, Metropolis: #900 Miles, which John Byrne gave us in Superman #9. If you’ve never read it, Brian Cronin shows most of it over at CBR’s always entertaining Comics Should Be Good blog. That gem, and this, is basically Lex Luthor as the devil, the tempter using his power to play with people’s lives.

On the other hand, good on Soule for giving us a strong treatment of Luthor that’s entirely consistent with his modern comics characterisation – it’s not his fault I’m so bleedin’ old.

And good on Soule for using the events of Trinity War and Forever Evil to motivate Lex’s actions – disturbed by the fact Superman doesn’t show up for his release from jail, he enacts Project Ghost Town to either a) bring him out into the open or b) make him look bad. Luthor doesn’t yet know that Superman has been removed from the playing board by the Crime Syndicate of Earth 3, and isn’t showing up anything soon

Incidental details I like include the namechecks for pre-Flashpoint DC towns St Roch and Opal City, the removal of a scar Luthor’s been sporting which just popped up a few months back (I think we finally saw its origin in the aforementioned Bizarro comic, which is nodded to here), and the ferocity with which he lets loose while testing the latest version of his super-suit.

The flaw for me is in just how brazen Lex is, with some very public murders he hopes the public will believe are tragedies, and an impulsive killing that would surely not go unnoticed in Metropolis. I know Lex is a criminal genius, known for having the angles covered, but how stupid are the authorities meant to be?

Penciller Raymond Bermudez and inker Dan Green do a decent job of telling the story visually, with their finest moment being the super-suit scene, as Lex drops the facade of the civilised man to blast the heck out of Superman dummies.

The opening page, though, causes a double take; the idea is that Lex is transitioning from prison to the outside world, and this is what we get (click on image to enlarge): 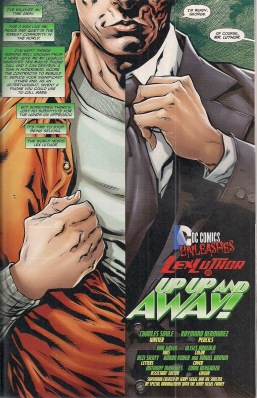 Half-and-half suit, hideous facial scars – have I picked up the Two-Face special by mistake? It’s likely Soule asked for this in his script, and Bermudez knocks it out of the park, but the concept is out of place.

The cover by Aaron Kuder and colourist Daniel Brown works well with the 3D treatment.

Overall, this is a pretty good villain focus, defining its lead character and adding some Forever Evil context. It’s not indispensable, but I can’t see many Superman fans regretting a purchase.