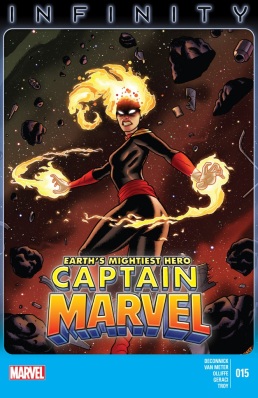 Kelly Sue DeConnick did something amazing. She made me like Carol Danvers for the first time in years, wiping away the obnoxious personality grafted onto her in the Civil War event and replacing it with a good-hearted humanity.

So even though I was left flat by the first issue of Infinity – my last, bet on it – I purchased this tie-in to the latest Marvel crossover. There’s been a time jump since the end of last issue, which saw Carol Danvers drifting in space, dazed after severing her mental connection to Kree supervillain Yon-Rogg. Here she’s in command of a crew of Avengers, fighting ‘the Battle of the Corridor’. The recap page tells us that last issue’s events erased her memory, which was something a neighbour’s dialogue in #14 suggested might happen, but it wasn’t confirmed. Such is the Marvel way – several times I’ve learned things about Matt Fraction’s Fantastic Four tales that weren’t in the story  from recaps. Heck, the digital edition intro here tells us this issue is ‘expanding on the capture of Captain Marvel and Hawkeye’ – but neither gets captured.

Anyway, when you read the story, it turns out that Carol has her memories, just not her emotional connection to them. All her military training – Earth and Kree – seems intact as she does a bang-up job directing operations. It’s all ‘cover your egress’ this and ‘auxiliary thrust’ that. Truth be told, my eyes glazed over so that I couldn’t tell you what the battle was about – lots of blasting, and all those infinitely powerful guys Jonathan Hickman has added to the Avengers floating randomly in space (I think they zoned out during Cap’s motivational speech and never came back).

Carol feels no emotional connection to Earth, to her friends, but she’s my emotional connection to this story, her narration tethering my interest, pulling me to the end of the book, where something happens that’s actually about her. I might not spoil it, but Joe Quinones’ somewhat brokeback cover tells the story – she’s back in Binary mode, still cosmic, but powered by a white hole. Which could prove handy, as she and Hawkeye are on the edge of a black one. Hopefully this will be the key to Carol becoming herself again, as she was similarly memory impaired when she became Binary the first time.

One thing I don’t like about this story is that no one gives a second thought to the fact that they’re killing their foes. OK, it’s war, Earth is at stake – the Vogons want to clear it, or something – but doesn’t anyone feel even a little sick at snuffing out lives? I can accept Carol being detached here – she’s a warrior by training and instinct, and has misplaced her humanity – but surely the everyman Hawkeye would feel something?

It’s Hawkeye who plays the role of best pal here, the friend who won’t leave Carol’s side as she readies for yet another self-sacrificial mission. Perhaps he’s noticed that she’s a little off – more likely he’s simply being the super-good guy we know Clint Barton to be.

The script’s by DeConnick, in partnership with the similarly excellent Jen Van Meter, and it does what it’s likely meant to do – pull Infinity readers into an issue of Captain Marvel. It’s just that I suspect all concerned would rather be doing something else – even the lettercol editorial voice sounds distinctly uninterested in Infinity. And it’s a shame that while Carol’s strategic mind is to the fore, there’s no big moment that shows how awesome her power set is.

Patrick Olliffe draws, Drew Geraci inks, Andy Troy colours and we get a bookful of good, solid art. Olliffe’s such a professional that he even has a stab at getting Carol’s new hairdo right (give up, there’s no ‘right’ to be had – it’s the very definition of a hairdon’t). I wish the script had demanded a singularly arresting image, though, to allow the lads to demonstrate just what they could do. It’s a shame when my favourite thing in a comic is the Falcon’s space helmet.

We get to see more of Carol’s helmet than usual this time, and I really don’t like it – those white eyes and the hard casing make her look sinister. Marvel should keep the sharp new costume, but ditch the hair and headgear.

So, not the best issue of Captain Marvel, but hopefully a step towards getting the character centred once more. Next issue is an Infinity tie-in too … let’s hope the crossover backdrop has gotten a little more interesting by then.