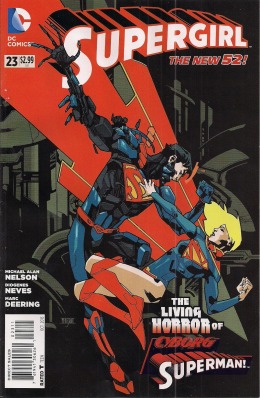 Supergirl is besieged by her memories, brought to life by the shape-shifting I’noxians. Her cousin, the Justice League, the Worldkillers, Silver Banshee, Tycho, Superboy, H’el .. they’re attacking her physically and mentally. And while she knows they’re not the genuine article, they can hurt her both ways.

Finally, the assault stops and the creature behind it, the Cyborg Superman, is before her once again. Weakened by kryptonite poisoning, there’s nothing she can do to stop him capturing her and preparing her for surgery – he believes her flesh will make him the man he once was, return his memories. An energy beam scrubs Kara’s flesh off her, removes the taint of the poison and the transfer process begins.

But someone’s coming, warns the Cyborg Superman’s I’noxian partner – the being who ‘created’ him. And as we likely all worked out awhile back, it’s Brainiac. The exchange process, though, is too far gone to worry – the Cyborg Superman is a man once more. He’s … 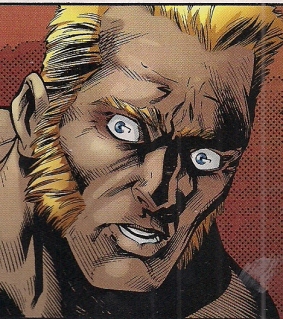 … Earth Man of the Legion of Super-Heroes! 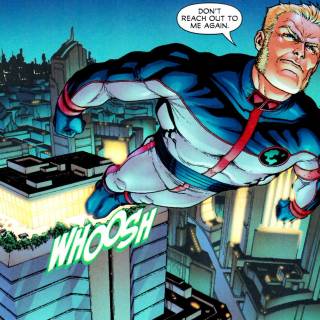 Oh, hang on, no, the dialogue’s arrived (click on image to enlarge) …

That’s an interesting twist, and if it’s true, and sticks, then that’s the Cyborg Superman firmly headed for Supergirl arch-foe status. But sentimental old me hopes it’s simply a layer added by Brainiac, to mess with Kara’s head (OK, that would take long-term planning and a complicated extrapolation of scenarios, but Brainiac is a super-computer). Because after more than 50 years of a clean-cut, brunette Zor-El, I find this monstrously mutton-chopped, bug-eyed loon hard to take.

This issue wasn’t the greatest – far too many pages are devoted to Kara fighting her memories. She knows from the outset they aren’t real – there’s no psychic hoodoo messing with her head – yet talks to them as if they were. And she shows an unwelcome callous side when she responds to the psi-shade of Tycho: 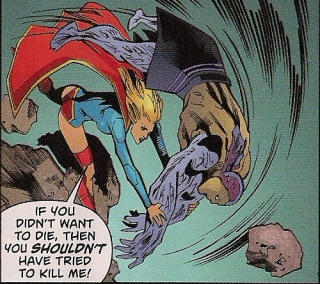 Ouch. I’ll put that down to the heat of the moment …the true Supergirl is present when she confronts the pretend Worldkillers and says that she doesn’t kill planets, she protects them.

This is a pretty creepy tale, with the de-fleshing of Supergirl making for a horrible image, but worse is the H’el creature, who looks set to talk Kara to death. 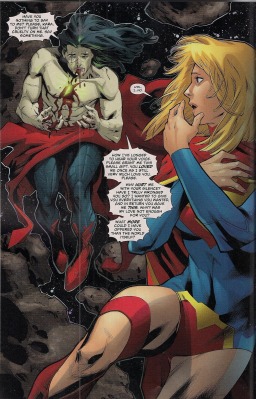 Oh, shut the H’el up. Mind, this could well be Nelson spoofing Scott Lobdell’s H’el characterisation. I do hope so.

While I disagree with his choice to give so much space to the memory melee, Michael Alan Nelson’s script has plenty of good lines within the sequence. Wonder Woman’s dialogue shows Kara has picked up on her mother complex. The Silver Banshee exchange implies guilt from Kara at leaving her friend behind to run off into space. So yes, I see that we’re getting more understanding of Supergirl via the sequence, but still …

There’s one line of dialogue I don’t get – all help appreciated. 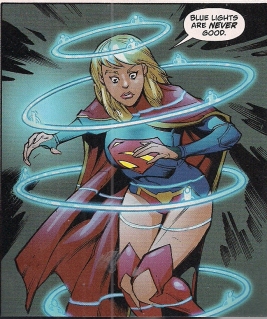 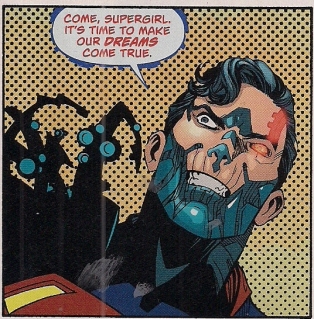 Kudos to whichever artists were involved – come on DC, give us breakdown credits. I think the art team changes on story page 14, when we arrive at the ‘Operation (sic) Theater’, in which case, Neves is the guy Roy Lichtenstein should be ripping off, and Hardin should be producing marvelous murals. But I could well be wrong.

I do know that the cover is by recently departed Supergirl artist Mahmud Asrar, and I love the way individual shapes combine for an arresting whole. The jaggedness suits a Cyborg Superman image, and Supergirl’s simplified hair works well as a blast of light in the darkness. And the use of Kara’s cape as a speed trail, bleeding into the red of the logo – masterful.

There’s no Supergirl issue next month, as DC pins its hopes on villain spotlights – or rather, lenticular covers – to grab our interest. Which means there’s an Action Comics-branded Cyborg Superman story by Nelson and a Superman-branded H’el one-shot by Scott Lobdell. I’ll be buying at least one of those.