Here’s a spin-off from the Age of Ultron series which sees Hank Pym gather a team of heroes to take on the evil machine intelligences of the Marvel Universe. Mostly cybernetic and robotic creations, the Avengers A.I. members are well placed to prevent a war between man and machine, with their first assignment being to bring down Dimitrios, whose drones are attacking Atlanta.

This first issue sees Hank Pym under fire from SHIELD Head of A.I. Monica Chang. She blames Pym for the rise of the machines, a consequence of his writing a virus to stop his creation, Ultron, from taking over the world. And yes, he bears some responsibility, but rather than ask him to explain, and help, she goes Guantanamo on him – she has him manacled, bag on head – abusing him physically and mentally. That’s Hank Pym, founder member of the Avengers, a team allied to SHIELD.

It’s only the appearance, and counsel, of Captain America that sees Hank freed to put a team together. Said team includes longtime Avenger the Vision; Vision’s ‘brother’ Victor Mancha, another creation of Ultron; and a Doombot Hank’s been tinkering with. With the just-upgraded Vision as field leader, they’re an effective unit, with Victor’s magnetic powers, Vision’s new ‘nanite infestation array’ and Doombot’s all-round awesomeness (click on image to enlarge) to the fore. Chang and Pym are nowhere to be seen after the initial pages, but hopefully we’ll see how they fit in soon, along with someone named Alexis, who appears on the cover and splash, and in the final panel, but doesn’t take part in the story.

The fight sequence features highly entertaining dialogue and interaction courtesy of writer Sam Humphries, with the haughty, reluctant hero Doombot the standout. I’m less thrilled with Chang – apparently Black Widow in Marvel’s Ultimate Comics – who comes across as a really rubbish human being and not one I’d let on any Avengers team. And Pym is far too cocky, even given his epiphany in last week’s Age of Ultron Book 10.1 AI; I cannot believe he would use a made-for-evil Doombot in any circumstances, and initial response apart, he doesn’t seem to be taking the AI threat especially seriously.

(I wonder if a Nextwave-style Machine Man was originally meant for the Doombot role – with just a few tweaks, the attitudes would match.)

The threat itself, Dimitrios, is a decent peg on which to hang the latest addition to the Avengers franchise, and I’m delighted to see the Vision given a featured role after around a decade of non-use and misuse. The upgraded powers – as well as the nanites, we have a supernova burst – are unnecessary given the Vision’s existing cool abilities, but we’ll see how they play out.

What I really don’t like is the Vision’s new look. Artist Andre Lima Araujo does a decent enough traditional Vision when he first appears (below left), but with the upgrade comes a redesign, and it’s not a good one (right). 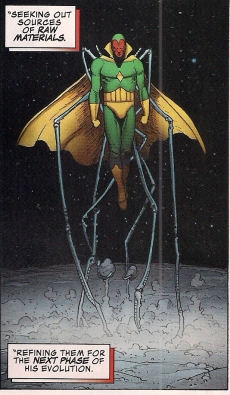 Plus, Araujo draws him as a tubby synthezoid, for some reason. Could we have the classic look back, please, Marvel?

The fight scenes look OK, they’re nicely laid out and clear. What would benefit Araujo’s work, though, is a finisher, a quality inker who could improve the overall appearance, show him how faces might look with extra effort. As with the aforementioned Age of Ultron Book 10.1 A.I., colourist Frank D’armata has to pick up the slack, and there’s only so much he can do. It would help if Humphries gave Araujo interesting things to draw – the first three pages of the Chang/Pym conversation don’t play to the artist’s strengths, meaning we get lots of titchy, samey facial expressions. This is comics, there are more interesting ways of dealing with expository dialogue … never mind post-Age of Ultron, we’re meant to be post-Age of Bendis. Super-chatty table talk suits few artists, so why not toss out the info in an elegantly contrived action sequence?

There are explosions and impacts in this comic, but the sound effects are scratchy, tiny, apologetic – they look amateurish. I assume this is Araujo’s doing, in which case he should relax, not be afraid to go large – or ask the excellent letterer Clayton Cowles to step into the breach.

The Vision’s costume looks better on Dustin Weaver’s cover, but still not wonderful. And I’m not keen on the sickly green tones chosen by Marte Gracia, what’s that all about?

I liked this debut issue, in the main. Hank and Vision are longtime favourites, the Doombot an instant like and the other characters have potential – even Monica, if Humphries is taking her character on a journey and not actually positing her as admirable. The storyline is an SF staple, and could go some fascinating places when applied to the world of the Avengers. And the artwork, while not brilliant, is at least clear, and will hopefully improve. So not a classic first issue, but entertaining.

One more thing. The Assembly lettercol at the back features a letter from one Chase Bowman, who notes that the language in Marvel’s titles tries too hard these days to be edgy and hardcore, making the books unsuitable for little kids. And in this very issue we have Monica Chang saying:

It’s a thoughtful, fair letter, well worth a read, The reply is basically, ‘we’re being relevant, it’s up to you to police your kids’ comics’. And I agree with that latter point, and it’s something Chase is obviously doing. But wouldn’t it be nice if parents could assume a comic book was ‘safe’ for their offspring, something that could appeal to smart children and adults alike without trying embarrassingly hard to be cool? As Chase says, for decades all Marvel books were all-ages, and many are classics that stand up today. The implied F-word above is just childish, making DIVISION Chief Chang seem far from the brainiac she professes to be, far from worthy of respect. And it messes up the look of the balloons to boot. There really is no need.