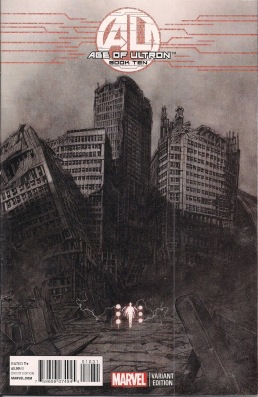 The Avengers fight the Intelligentsia, a spaceknight turns into Ultron, Hank Pym defeats said mad robot with a computer virus and psychology, the Age of Ultron is averted. And time breaks.

Thus concludes another Marvel event. Or rather, ‘concludes’. The main focus of the story, the alternate world created by Ultron, is tied up, but a whole bunch of related threads are begun. And rather shamelessly, if you ask me.

Because the book ends with a series of epilogues: Ultimate Spider-Man sees something scary over New York; Hank Pym gets an idea; and the Big Mystery Character so Big and Mysterious That This Comic Comes In a Plastic Bag vows vengeance against whomever got her shifted across universes. Each of these vignettes is followed by a house ad telling us where the storylines continue. It’s like a free sampler, but for ‘free’ read ‘$3.99’. As I said, shameless – Marvel doesn’t even pretend the Age of Ultron event meant anything, that it might have earned a moment in which readers might consider, and compliment, the ride. Nope, it’s more ‘now toss your dollars on these new bonfires’. Because if these spin-offs – Hunger, Avengers AI and a Guardians of the Galaxy arc – are as well-thought- through as Age of Ultron, they’ll be thin gruel indeed.
For Marvel have given up on following their well-established rules of time travel, leading to one hot mess. Wolverine and Sue Storm have changed their own timeline a couple of times, when decades of storytelling have it that if you go back and, say, kill Dr Doom as a baby, when you return to 2013 he’s still around – you’ve simply created a timeline in which Mr and Mrs Von Doom have had a terribly sad life. And the heroes have likely created extra Logans and Sues in their own timeline – Rich Johnson explains it all over at Bleeding Cool.
I’m not quite sure what Tony Stark’s line ‘we broke the space-time continuum’ means, beyond various heroes making faces at montages – are aspects of alternate timelines seeping into their universe? Is the Thing now in his Blackbeard persona from Fantastic Four #5, 50 years ago? Is Wolverine getting the memories of alt-Logans? The illustrations are striking, but baffling – a few words from Brian Michael Bendis – him being the writer and all – would help enormously here.
Are we getting a Marvel version of Crisis on Infinite (actually, I think that would be seven) Earths? Please God not a Flashpoint-style Earth Mash-Up.
As for the enigmatic wifey, actually, I can reveal all, as Marvel themselves spoiled it weeks back. It’s Angela,  minor Spawn character, of interest to some because she was created by Neil Gaiman, but me, I read 1602. Why Marvel fans are expected to get excited about a scowly tart twirling tickertape I have no idea. Her upcoming stopover in Guardians of the Galaxy won’t prompt me to purchase because, well, I really don’t know anything about her beyond press release stuff; this isn’t DC bringing back the original Captain Marvel, it’s Marvel reviving someone most everyone had forgotten – if they’d actually heard of her in the first place.
There are incidental pleasures in the book. The odd Bendis line (…a group of fairly intelligent criminal masterminds’). SWORD’s term for a cosmic threat being Code Phoenix. The artwork of Bryan Hitch, Paul Neary, Brandon Peterson, Butch Guice, Carlos Pacheco, Roger Bonet, Tom Palmer, David Marquez and Joe Quesada is suitably flashy. The artwork of Alex Maleev is distinctly unflashy, and makes Hank Pym talking to Hank Pym my favourite scene.
Peterson’s cover is an effective mood piece. Beats me who that figure with the glowing circles is, though. The Harlem Globetrotter Cosmic?
Overall though, this issue could win an award for the disparity between amount of hype surrounding it, and success in terms of emotional, intellectual and visceral payoff – it’s just superheroes going through the motions, and more promises of great things. Heck, we’re told Hank’s plan to take down Ultron on the recap page and it goes off without a hitch – not a single reversal of fortune. If you haven’t already bought this so-called event, don’t worry, there’ll be another one along in a minute. And I doubt that would repay your interest, either.