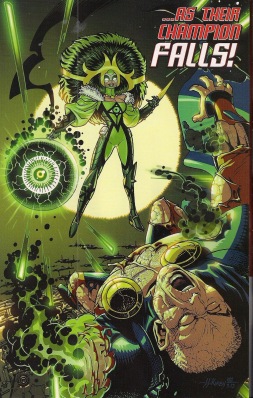 The Fatal Five’s attacks on the United Planets continue with the Emerald Empress devastating Weber’s World, the organisation’s admin HQ. Perched on the deadly Emerald Eye of Ekron like a witch on a broomstick, she’s murdering by the dozen. Can Mon-El, one of the most powerful Legionnaires, withstand her fury?

Meanwhile, there’s trouble in villain paradise as the Persuader shows signs he plans to betray Tharok. But hopefully, not before we meet traditional fifth member Mano.

Well, it’s fair to say that the Fatal Five storyline has kicked into high gear, with escalating problems for the Legion throughout the galaxy. They’ve already seen Sun Boy killed, Star Boy may have followed and here there are more deaths. Well, possibly. We see events that could easily terminate Legion lives, but scene changes frustrate confirmation. And while Mon-El is gravely injured by the Empress, he’s not dead yet.

And I can’t see writer Paul Levitz killing him off for the sake of this story – it’s not like ‘Superboy’s big brother’ dying would send sales soaring, whereas offing him would cut off various avenues of storytelling. Likewise, I can’t envisage the other threatened Legionnaires dying either; Levitz is toying with us, having ‘proven’ with the death of Sun Boy that he’s willing to sacrifice major characters. But ‘proven’ gets quotation marks because Sun Boy will be back any month now. Those aliens the Legion keeps calling ‘cannibals’ – on their own terms, they’re not – were saved from the giant by the team this time, and I don’t doubt they’ll repay the kindness by farting old Dirk back into existence. Or something.

I was a bit disappointed by Phantom Girl getting rather hysterical and sorta suicidal – is this why I voted for her to be Legion leader? I think not. This isn’t the Tinya who’s survived as a Legionnaire since the beginning, never flagging in courage or faithfulness to the dream.

Truth be told, three issues into this storyline, I’m ready for the Legion to be a bit more proactive; yes, things are tough, but this is the Legion – the greatest collection of powers and minds the United Planets has. Maybe next month …

Drawing Levitz’s script – recent co-plotter Keith Giffen is credited as Consulting Destructionist – are two artists, Scott Kolins and Jeff Johnson. Kolins is up at bat first, so he gets to debut the frankly alarming new look for the Emerald Empress. Given its Jack Kirby stylings, I’m guessing it’s a Giffen creation … certainly someone should take the blame, because it’s awful. Hair the size of Bouncing Boy, tits the size of, well, Bouncing Boy times two. It’s all just too big. I can see the Asgardian homage headpiece working if it wasn’t perched on a Botanical Garden, while the boobs don’t have to be quite so in the face.

Villainess apart, there are things to like in Kolins’ compositons, such as the palpable sense of danger as Mon-El faces the Empress, and Polar Boy holds back the giant. Things get a little too sketchy for me in the latter scene’s finishes, but I assume that’s an artistic choice on Kolins’ part – a simpler style for more direct emotion.

Picking up the artistic baton is Jeff Johnson, whose work I’ve not seen since his Wonder Man at Marvel in the Nineties. You can see he’s feeling his way as he gets to know the Legionnaires, but Johnson does a good job of giving the members individual faces without veering off model, and conjures up some dramatic layouts. His Persuader is pleasingly imposing and his Empress is indeed taken down a visual notch, and works better. I can’t wait to see how regular artist Francis Portela approaches the new look next month.

There’s another artist drawing the Empress on the gatefold cover, one JJ Kirby (any relation?). I like the composition, but the characters look way too dweeby – the Empress, in particular, looks like the evil queen of some tweenie cartoon, not so much homicidal space siren as leering moppet.

All in all, another exciting issue. But I do hope Levitz shows us the Legion organising and fighting back soon, reaffirming their position as the galaxy’s greatest super-team. Right now they’re being played, and the Legion should be smarter than that.

25 thoughts on “Legion of Super-Heroes #19 review”