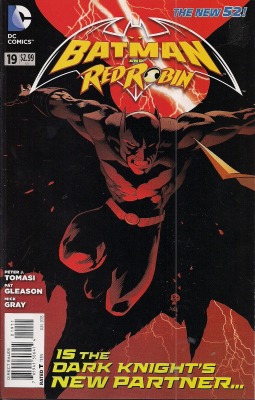 This issue features the biggest surprise so far in DC’s month of surprising gatefold covers, so pop off now if you don’t want to be spoiled.

Still here? Then read on …

The main thrust of this issue sees Batman, in the wake of Damian Wayne’s murder, in barking mad mode. Yes, he’s in a universe in which people regularly come back from the dead, but kidnapping and dissecting Frankenstein, Agent of SHADE, in a bid to learn the secrets of resurrection? Whack-o. Then there’s the small matter of the bodies he’s stolen from Gotham medical research facilities. (‘I didn’t abduct them, these people donated their bodies to science and I appropriated them from a hospital … for science.’)

It’s safe to say he’s crossed a line or two, but can Tim Drake, the Teen Titan known as Red Robin, bring his former partner back from the brink?

None of which has anything to do with this issue’s surprise. That would be the introduction of a new character to the current DC Universe, but one familiar to many readers.

So there I was with last month’s review, harping on about ‘Clark Kent’s list of recommended films to entertain and inspire Damian’ when, we now see, the CK referred to someone else entirely – it’s Carrie Kelly, the Robin from Frank Miller’s The Dark Knight Returns graphic novel. And she has a mystery connection to Damian that sees her tracked down by Bruce Wayne.

Safe to say, I didn’t see that coming, and am now wondering whether the excellent visual of her in full Robin colours over the cover fold from penciller Patrick Gleason, inker Mick Gray and colourist John Kalisz is more than a nod to DKR. While I’m no fan of that much-loved graphic novel, Carrie I liked, and she’s a peach here, a real breath of fresh air; I could certainly enjoy her having a stint as official Teen Wonder.
As for Red Robin, who gets co-star billing, the Tim served up by writer Peter J Tomasi is much closer to the Tim readers loved for years before DC’s Flashpoint event turned him into the humourless twonk of Teen Titans. And Frankenstein … Frank is just cool, and I hope he turns up in a Tomasi-written title again.

Gleason and Gray have become my favourite Batman art team. Just look at this issue, which alternates beautifully clean, open art in the Carrie sequences with moody, dark lines in the Frankenstein scenes. And it’s fascinating to see the two styles come together as Bruce meets Carrie. The storytelling is first class, with one panel in particular – Tim facing Batman after the Frankenstein sortie – that says so much without a single word. Add the colours of Kalisz and you get a gorgeous finished product.

Never mind resurrecting Damian, this issue reads as if it’s written by the late, kinda great Bob Haney. Batman as bodysnatching mad scientist is exactly the kind of concept the writer who gave Bruce and Clark Super-Sons and insisted it wasn’t an imaginary story; who had pre-Crisis Wildcat living on Earth One; and who created Thomas Wayne Jr would have come up with. Perhaps this issue is Tomasi’s April Fool to the readers, right down to the choice of Tim Drake as co-star … it’s only a few years ago that the pre-Flashpoint version was merrily cloning bodies in a bid to bring Superboy (it was his week for being dead) back to life.

So let’s just enjoy this issue for what it is, a very entertaining one-off Brave and Bold revival starring Batman and Frankenstein, with a side order of Tim and the introduction of a very promising new-old character.