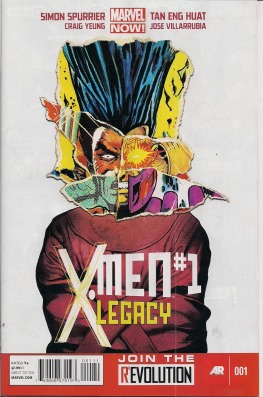 This comic book boasts a fantastic collage cover – take a bow Mike Del Mundo – and a good joke relating to the protagonist’s hair.

Which is something. I began reading this with my supper, got two pages in, and swapped it for the new Wolverine and the X-Men, which was pretty good, thank you very much. I went back to Legacy post-pizza, so I wasn’t chewing two things over at once.

I do appreciate that even though this is the relaunch of a rather unloved X-book, Marvel are trying something different. After all, no one was crying out for a comic starring the mentally disabled son of Professor X, no matter how much his unlimited power set might excite us. British writer Simon Spurrier isn’t an obvious choice for a high-profile launch, while Tan Eng Huat marches to one very individual artistic drum.

So hurrah, something new and different.

And not for me. The first couple of pages throw us in at the deep end, deep inside Legion’s mind. Into a prison, the Qortex (geddit?) Complex. There, the personalities that control his various powers – once purely psionic, now more ‘think of a number’ – are tortured by The Xtractor. They dream of rebellion, and escape.

Trouble is, Spurrier dresses the scenario up with all kinds of annoyingly cutesy sci-fi terminology. Like so (click on image to enlarge). 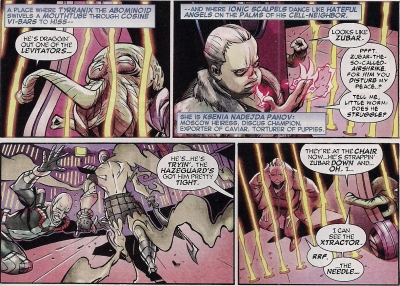 Maybe I’ve simply not read enough science fiction, and students of the genre delight in This Kind Of Thing. Me, I glaze over as I try to connect with the story. It’s not as if I’m entirely unfamiliar with Legion, aka David Haller – I was reading New Mutants when he debuted. But back then he had a handful of personalities linked to such powers as telekinesis and pyrokinesis. Now he’s like that villain in Grant Morrison’s Doom Patrol, The Quiz, who had every power you hadn’t thought of. It seems he can do anything, but not without some random soul’s backstory being dredged up.

Legion is at a commune in India for ‘neuronauts’ – lost souls whose psychic powers have left them frail and confused – being counselled into some semblance of sanity by Merzah the Mystic, one of those streetwise Yodas beloved of comics who exists for but a short time to impart wisdom, then get killed (see also Ducra of Red Hood and the Outlaws ‘fame’). Rather unsubtly, Merzah’s surrogate dad credentials are cemented by his being unable to feel his legs just before he pops his clogs.

David is pretty self-aware, and not rattled by his prisoners’ escape attempts. He helps a distressed old neuronaut, and tries to make peace with a group of pitchfork-wielding locals. It’s when David feels Professor X’s death that all hell breaks loose, and Merzah is caught in the crossfire. Dying, he helps David see that carrying on his father’s work, showing the world that mutants aren’t all bad, is the way to go. That’s your Legacy right there, readers.

David isn’t convinced by Merzah’s entreaties that he make friends with the X-Men, having just had a rather big hiccup on his road to enlightenment, but his psychic outburst alerts them to his activities. As the issue ends, David is set to go on the run from the people most likely to accept and help him.

I enjoyed Eng Huat’s work here more than I did his Doom Patrol stint, several years ago, there’s a fascinating animation to it – at least, in the real world scenes. He takes Bill Sienkiewicz’s unique Legion design and runs with it, enjoying the madness of his hair, his lean muscularity – what we wind up with is a mutant version of Daniel Day Lewis. I wasn’t so keen on the weirdness inside David’s head, likely because I was so irritated by the words that I had a hard time marrying the images to them. The colours of Jose Villarrubia are a real asset, adding another level of separation to Legion’s two worlds.

I relished Spurrier’s non-mindscape dialogue – for once David actually sounds like a Brit. I liked Merzah, for his cheeky chappy guru-ness. The notion of a truly damaged young man trying to heal the rift between humans and mutants has potential. And Eng Huat has an artistic signature that shines on the right project.

But Lordy, those mindscape sequences, they’re virtually unreadable. Tone down the alien psychobabble, and I may try another issue. Or better still, dump such scenes completely, find some other way to make David’s situation manifest. I don’t know. What I do know is that X-Men: Legacy starring Legion is going to be a tough sell. I hope it finds an audience, but I can’t see it including me.