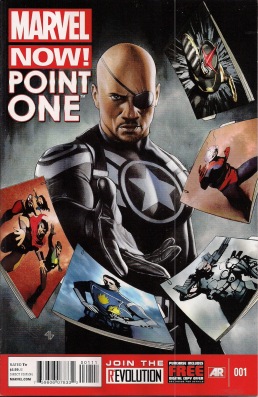 This oversized issue sets the scene for, or gives the flavour of, some upcoming Marvel launches. So let’s just launch into its contents.

So there you have it, 49pp of strip for $5.99, which by Marvel standards is a positive bargain. If it were a DC comic, though, this would likely be a dollar. Still, it’s an entertaining time passer – certainly better than last year’s equivalent – with one outstanding short and a terrific cover by Adi Granov. It’s Marvel NOW!, if not quite Marvel WOW!