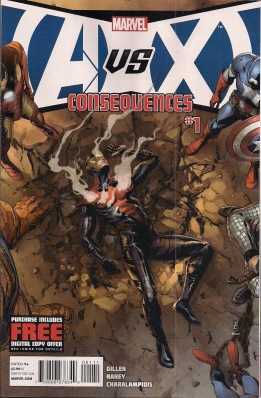 Avengers Vs X-Men is over and the consequences are:

Basically, it’s subplot after subplot, all of which could – and likely should – be addressed in one of the several dozen existing X-Men or Avengers books. Kieron Gillen’s script is decent, but at base this reads like the result of a ‘Get more product out there’ memo; there are none of the character flourishes or wacky concepts with which Gillen can dazzle when he’s on an under-the-radar book. Never mind Scott Summers, it’s the writer who’s in chains here.

Tom Raney pencils and inks and the results are variable. The pages with Wolverine, Storm and the Jean Grey kids are exemplary, really good looking. A scene with Wolverine towards the end, coloured by Jim Charalampidis, is also excellent (click on image to enlarge). 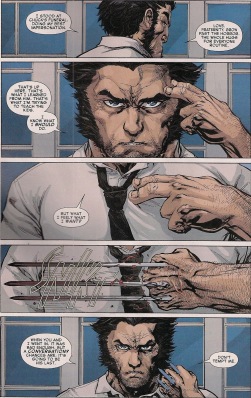 But then there’s the less-successful sequence with Iron Man and Captain Marvel, which looks as if Raney is trying for the tone Dexter Wong evokes in the latter’s own book. And the Hope scene, which reminds me of an especially wonky Mark Bagley. It’s weird, I think of Raney as super-dependable, one of the unsung heroes of mainstream comics. Was he rushed, experimenting with styles or simply having an off-day? I don’t know – but I still reckon him underrated.
As a Legion of Super-Heroes fan, I’m a bit of a sucker for ‘traitor within the team’ stories, but with five more issues of Consequences at $3.99 for 20pp of story, I think I’ll pass. I don’t doubt Gillen and Raney will make this entertaining, but at the prices Marvel charges, books need to feel essential.