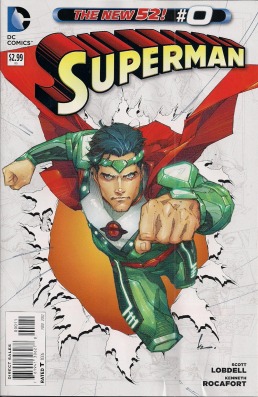 Last week, we saw the last days of Krypton from the perspective of Zor-El and Alura, parents of Supergirl. Now here’s how it was for Jor-El and Lara, Superman’s folks, in DC’s rebooted comics line.

The broad strokes of the story are the same – DC was never going to change those – but the texture is richer than in most tellings. So it is that we see Jor-El deep inside Krypton, collecting the data that proves his world is dying; a Doomsday cult nipping any plans Jor-El might have had to save his fellows in the bud; Lara kicking butt and taking names rather than being a good little hostage; and Kal-El’s conception announced.

New details adding to the whole include Jor-El’s discovery of strange creatures in the bowels of his world; Lara’s position as a hospital doctor; the man who was Jor-El’s mentor; and the woman in his past. Making his debut as regular Superman writer, Scott Lobdell gives us enough Kryptonian terms (scicon, sekts, omniversity) to add verisimilitude, without overdoing the sci-fi jargon. And whether he’s presenting Superman’s narration, or laying down a conversation between Jor-El and Lara, Lobdell convinces with a stylish script.

The characterisation of Lara and Jor-El is pitch perfect: he’s the brainiac with a tendency to dream, she’s the more grounded scientist – but there’s no doubt they’re equals, and equally in love with one another. And I love the spirit shown by Jor-El (‘What is science without a little chaos?’) and Lara (‘I’m a physician, Jor-El. Of course I missed all her major organs’) .

There’s a detail in here I don’t recall from previous tellings, that one thing working against Jor-El’s hopes to evacuate the masses via spacecraft was Krypton’s traditional heavy gravity. It makes perfect sense … has no one ever come up with that previously? Whether he invented it, or simply blew the dust off the idea, credit to Lobdell for including the story point.

Lobdell also surprises with the incorporation of that daft great cosmic horn blown way back in the first issue of Superman’s New 52 run – I’d assumed that was going to be ignored forever.

Also climbing on board Superman this Zero Month is Kenneth Rocafort, Lobdell’s partner on Red Hood and the Outlaws. Call it creative synergy, call it dumb luck, but something wonderful is happening here as Rocafort bring’s Lobdell’s story to life with drama and grace. One thing I especially like is that while Jor-El is recognisably Kal-El’s father, they’re not drawn as twins, as has usually been the case. And as coloured by Sunny Gho, the art looks painted, but never pedestrian. Krypton hasn’t looked this wonderful – in the literal sense – in years.

So there you have it, the best issue of Superman since the New 52 debuted a year ago. With the new creative team keen to give us a long run I’m optimistic that at last the Man of Steel will get stories worthy of him.