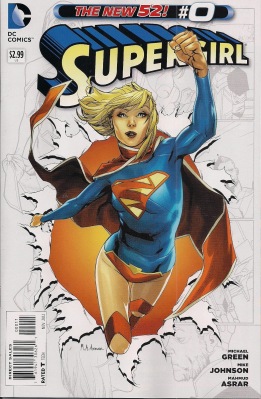 Of all the DC Zero Month titles I’ve read so far, none gives up as many secrets as this issue. More than just a story set Before the New 52, it’s the culmination of a year’s worth of mysteries for Supergirl readers. Here we learn the disturbing details of Kara’s departure from the planet Krypton; how the Worldkillers fit into the equation; who shot Zor-El as he was about to launch his daughter into space; and why she orbited Earth’s sun for years rather than touch down as soon as her pod reached our world.

As well as answer the questions they raised, writers Michael Green and Mike Johnson set up a new riddle – what is Superboy doing in Zor-El’s lab, in Argo City, on the day of Krypton’s doom? It’s likely this will be addressed in the upcoming H’el on Earth storyline in the Supergirl, Superman and Superboy titles, but for now, colour me intrigued by the surprise cameo.

The pacing is first-class, with the issue punctuated by ever-more frequent and forceful ‘planetquakes’, while the script skilfully captures Zor-El’s caring condescension, and fear of his plans being derailed, in refusing to explain them to either wife or daughter. The strained relationship between Zor and Jor-El makes sense in context, and the fact that the brothers never got to say goodbye is a tragic new wrinkle on the Superman legend.

But the book ends on a note of optimism, with an expanded version of a key scene sketched in a few months ago. The big question now is, when will present-day Kara learn what we readers have found out here?

Mahmud Asrar’s artwork is excellent throughout, capturing the torment, exhaustion, confusion and courage of the characters. Zor-El and Alura’s hair accessories apart – think sci-fi Archie meets Thor-Girl – the Kryptonian clothing looks excellent, with Jor-El benefiting especially; he comes across as a scientific shining knight. What’s more, Zor-El’s sky skimmer is a terrific design, while the planetquake effect is imaginative.

Dave McCaig unleashes his brightest hues for Krypton, meaning we get orange skies befitting a red sun, primary colour fashions and an intense green as the world ends. It’s a lovely job. Lettering the book, Rob Leigh does well, though I doubt he really meant Kara to say ‘far from preying eyes’. That’s two for two in terms of DC comics and typos this week, with Wonder Woman #0 also an offender.

It’s a small thing, but it distracts from an otherwise superb issue, containing one of the best takes on Krypton’s end I’ve seen. I’ve complained in the past about just how drawn-out Supergirl’s New 52 origin has been, and I stand by those reviews, but issues such as this ensure I’ll keep coming back for more.