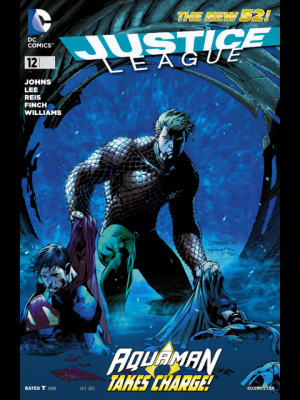 The Villain’s Journey ends as the Justice League takes down David Graves. Green Lantern is the only hero not fooled for a second by the demons pretending to be the ghosts of their loved ones, and he leads an attack on the bad guy. The other MVP here is League liaison Steve Trevor, far from dead and able to surprise Graves with his sharpshooting. Other heroes get blows in too, but it’s Hal and Steve who are the heroes of the hour.

What a shame, then, that once Graves has been sent to Belle Reve prison, these two aren’t thrown a parade. Au contraire. Hal quits the League, feeling that the public needs a scapegoat after his stupid scrap with Wonder Woman last month. And Steve is sacked as League liaison by Wonder Woman, because she hates the idea that he’s in constant danger because of her.

Aquaman feels the League needs better leadership, and volunteers, but current chief Batman isn’t having it. Suicide Squad boss Amanda Waller asks Graves to write a book that will destroy the League, as his previous one made their reputation. And Superman and Wonder Woman have a pathetic, needy kiss.

This isn’t a brilliant issue. Graves’s master plan – to make the League better heroes by forcing them to understand loss – was whacko last time writer Geoff Johns used the idea, with Zoom in Flash. Even more whacko is the League deciding that, yes, they were responsible for the death of Graves’ family because they didn’t consider every possible source of civilian casualties in the aftermath of the Apokolips war. The idea that they saved the world, but because people still died they’re not fit to be called heroes, is just stupid. And Diana’s logic is weird – she pushes Steve away but seems OK with some new League liaison having a target painted on their back. Plus, the recap at the start is a headscratcher, with the media apparently knowing more about Graves than the League.

But I like that Graves is despatched pretty quickly once the League members begin working together. And the new information we’re given about Wonder Woman’s past, and beliefs, fills in some needed detail, while Steve is a compelling, admirable fellow. Aquaman calling for a more committed, better League is a nice callback to his forming the Detroit League back in the day. And I love that Hal is the one who sees through the spirit illusions, and is willing to sacrifice himself for the good of the League (even though he’s wrong to take the blame for last issue’s shameful spat). And who knew that Doris Lessing is such a big seller in the New 52 DC Universe?

This issue is one of the better Justice League scripts since the series began, though that’s not saying an enormous amount. Jim Lee’s artwork looks pretty good, even with numerous inkers on board. While we still get lots of splash pages, they’re offset by loads of tiny panels which jolly the story along- suddenly it feels as if we’re getting value for money. The action is big and daft and enjoyable, while the quietest scene – Superman and Wonder Woman ‘finding’ one another – plays out sweetly. I’m not thrilled by the prospect of a Diana/Clark fling, but it’s something DC has to get out of the way whenever they reboot, so bring it on, and kick it to the kerb.

Wonder Woman also features in the other standout scene, a visit to the recovering Steve. Diana’s not demonstrating the wisdom she’s meant to have, but at least Johns and Lee power the encounter with convincing emotion, something this series has lacked overall.

The issue closes with previews of what’s to come in the next year and a bit – the new Justice League of America, a traitor, Captain Marvel (bah to Shazam!) joining up. Let’s hope it’s better than the first year of this series, which has been uneven, with a leaning towards the bad.