Still on the trail of Gotham’s missing children, Batwoman enlists the help of friendly were-beast Kyle Abbot. He leads her through an abandoned funhouse that’s anything but fun – they’re attacked by an urban legend come to life, Bloody Mary. They stop the legendary murderess, but fail to find the kidnapper Sune, aka Maro, ‘a sadistic shapeshifter’. As she dissipates, though, Mary tells Kate Kane that Maro has fled to the protection of the Queen of Monsters, Medusa.

Elsewhere, Batwoman’s cousin, Bette Kane, is recovering from injuries inflicted by the Hook and is about to have an important chat with Kate’s dad. And Detective Maggie Sawyer is pilloried by press and public for the lack of progress in finding the lost children. Kate, back from being Batwoman, tries to be there for Maggie, but she’s pissed off at Kate’s obvious keeping of secrets from her.

Meanwhile, Wonder Woman is fighting to crush the Serpentine cult, which sacrifices children to raise monsters (is the snake-haired Medusa behind this too?). Taking a breather after ending their horrific schemes, she’s confronted by Batwoman, who believes that Diana’s background in Greek myth is needed if Medusa is to be beaten.

First, the bad: this ruddy kidnapped kids storyline still isn’t resolved – it’s been a year, and I know how those angry Gotham citizens feel.

The good – pretty much everything else. Kate Kane seem somewhat less selfish than when I packed this series in a couple of issues back, showing concern for both Maggie and Bette. The coming team-up with Diana is organic, with Medusa – previously presumed to be an organisation rather than a monster – having been a presence for quite a while. While Kate and Diana don’t meet until the end, Diana’s presence is smartly folded into Batwoman’s ongoing storyline via adjacent imagery.

Smart layouts include one spread that’s half-framed by the Bat icon, half by the stars associated with Wonder Woman. Another has a central image of a tentacle-slicing Diana surrounded by images of Batwoman and Kyle on their separate quest, with the funhouse setting perfectly motivating multiple warped panels.

In the past I’ve moaned about JH Williams’ clever, imaginative spreads being fantastic to look at, but not serving the story. Not this time – the art has all the bells and whistles we’ve come to expect, yet the storytelling is clear as a bell.

Williams’ Diana is suitably fierce – the New 52 Wonder Woman being required to hack and slash at all times – while looking a bit silly in the new costume. The classic may be a glorified bathing suit, but I’m so used to it that it never pulled me out of the story. The ‘update’, with its many seams and surfaces, looks like a boring knock-off.

Still, Williams’ close-ups of Diana are splendid, and the fantasy setting she’s battling in, and creatures she faces, are gorgeous. I can’t wait to see how he melds the style he sticks with for Batwoman pages to a Classical mode more suited to Diana. This time, Williams shows his versatility with a more naturalistic style for the daytime scenes with Kate, Maggie and co, while still using the odd showy layout.

Great as the art is throughout, this one throwaway detail is my favourite – Department of Extranormal Operations boss Mr Bones dressed for summer. 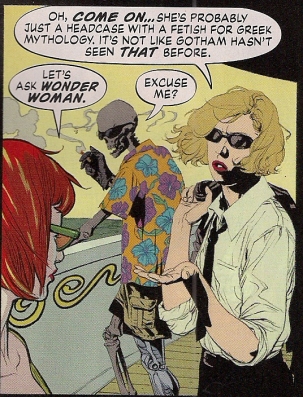 The story by Williams and W Haden Blackman is thankfully linear – recent scripts that hopped around in time like a kangaroo with fleas were another factor in my dropping the book (the chance to see someone other than Brian Azzarello and Geoff Johns writing Wonder Woman has me back for a peek).

As for Diana, the writers handle her well, but the lyrical inner monologue she’s gifted shows just what a pretentious bore the New 52 heroine is: Wonder Woman is all about the mission and her magnificence, there’s no suggestion of humour or a life outside her armour. She’s all Amazon, no Amazing.

Still, Williams and Blackman are dealing the cards they’ve been dealt, and at least here we’ll see Diana fighting alongside a peer, rather than being a straw in the wind of godly hurricanes.

I don’t like that Kate seems happy to go into the team-up loaded with hi-tech DEO surveillance equipment to feed Mr Bones information on Wonder Woman. That’s hardly meeting Diana in good faith, and it’s also stupid – Wonder Woman tends to know when she’s being lied to, and she doesn’t like it.

But overall, as a chapter this issue works well, the coming confrontation with Medusa suggests this initial story is finally going to wrap and the dialogue serves plot and character – if the Batwoman boat stays this steady I could easily see myself sticking around after the current team-up.

Williams, colourist Dave Stewart and letterer Todd Klein work together to ensure the differing aspects of the artistic package come together into a coherent, stunning whole. So different colour palettes are used for Williams’ various style; distinct fonts and treatments distinguish between the speech and thoughts of Batwoman, Wonder Woman, Bloody Mary and so on. It all makes for a book that looks like nothing else in DC’s line.

The cover is striking, too. From the fantastically real image of Batwoman confronting Bloody Mary to the more impressionistic Wonder Woman to the reflected logo – it’s a winner. Take away the cliched blood on Diana’s sword and it’d be perfect.

So I’m back with Batwoman. More issues this fine and I won’t be going anywhere.