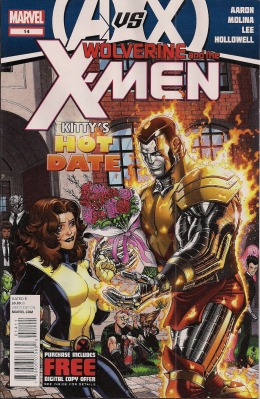 Once they were Love’s Young Dream. Now Kitty Pryde and Peter Rasputin are on opposite sides of the Avengers vs X-Men conflict. While Shadowcat tries to keep the Jean Grey School running with most of the staff off fighting alongside the Phoenix Five, Colossus – empowered by the cosmic force – has been changing the world ‘for the better’.

But if his personal Paradise is to be attained, he needs to win back his sweetheart. So he asks Kitty on a date and despite her feelings for him having changed, she agrees. Well, it’s a chance to suggest that swanning around flaunting omnipotence isn’t actually a good idea when the power you’re using belongs to the corrupting madness that is the Phoenix Force.

Well, not for Kitty and Peter. We readers, though, are treated to probably the single best Avengers vs X-Men story yet. Not just for the hardly romantic reunion between Kitty and Peter, which runs the gamut from hilarious to horrific. No, there’s also Iceman’s powerful realisation, while supportng Phoenix Fiver Magick, that he’s on the wrong side – writer Jason Aaron allows Bobby Drake to display the maturity that befits a veteran hero and certified accountant.

And best of all, there are the endlessly amusing attempts of headmistress Kitty to wrangle her ragtag staff – Husk, Toad, Doop, Warbird and ‘Substitute Teacher Deathlok’ – into covering classes they’re seriously unqualified to teach. Some of the gags tend towards the delightfully black, such as the private manifestation of Toad’s crush on the skin-shedding Husk (click on image to enlarge/feel ill). 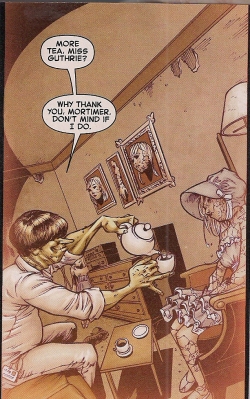 Kitty is, frankly, magnificent, managing to stay calm while surrounded by idiots, some of them godlike idiots. And her bravery in the face of the creepy Colossus is inspiring, showing why she’s such a big favourite among X-Men fans. Peter is as pathetic as he is powerful, the ultimate ex who won’t take no for an answer; I really hope that post-Phoenix Five he falls on good times, as I don’t think this sweet soul has had more than two consecutive good days in decades of comics.

The dramatic highlight comes as Peter spouts a very familiar motto, showing that he’s well on the way to being more Dark Phoenix than Colossus. Which is terrific, as it means that as well as a memorable character piece amidst the sound and fury, we’re getting some movement in the bigger story. 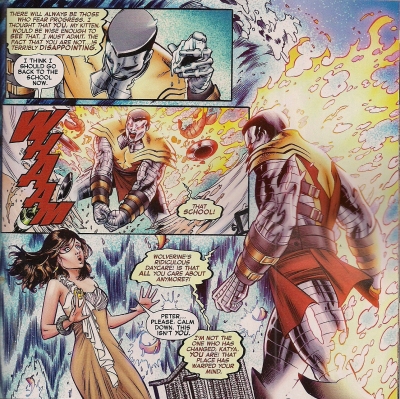 The pencils and inks are by Jorge Molina and Norman Lee, and they’re breathtaking. Kitty looks like a delicate flower, but the steel  is evident, while Peter’s sensitive side and Phoenix forcefulness battle before our eyes. The dramatic beats of Aaron’s script gain their full impact, while the comedy is likewise mined to best effect. Intelligent use of angles pulls us into the story, while the fight scenes – in particular, the Thing vs Magick, Iceman and Angel – are fantastic. And when the school staff face off against Colossus – wow! Is it wrong to want to hug Krakoa the Living Island?

Adding to the effectiveness of the artwork are the colours of Morry Hollowell, who may have hit a career best here. His intense, intricate tones set the pages pulsing with life

It’s a reviewer’s cliche, but if you buy just one Avengers vs X-Men tie-in, make it this one, Because despite the event livery, it’s actually a brilliant X-Men story in disguise.