Babysitting the Baxter Building while the Invisible Woman and Mr Fantastic holiday with the kids, the Thing and Human Torch become embroiled in a time travelling, dimension spanning tale guest starring Dr Strange. Also sharing the spotlight is Vincent, the most mysterious member of the Clan Destine, a genie/human hybrid family who prefer to enjoy their centuries-long existence in peace rather than in public.

It’s this attitude that sees Vincent Destine wig out – there’s so much sadness in the world and while his massively powered family could help, they instead devote themselves to private pleasures. Vincent’s breakdown, which spans several historic periods and versions of himself, puts the Torch, Thing and Dr Strange in massive danger as they try to work out if he’s hero or villain.

This is quite the romp. The time travelling gives writer/artist Alan Davis and inking partner Mark Farmer the chance to dazzle us with dinosaurs, roll out the Romans and welcome us to Woodstock in page after page of dead-on storytelling. Other members of the Clan Destine also put in appearances, among them Dom, Walter, Gracie, Albert, Jasmine and the man who started it all by falling in love with a genie, Adam. Little known they may be to the Marvel readership at large, but Davis’s creations are a compelling, charismatic crew (click on image to enlarge). 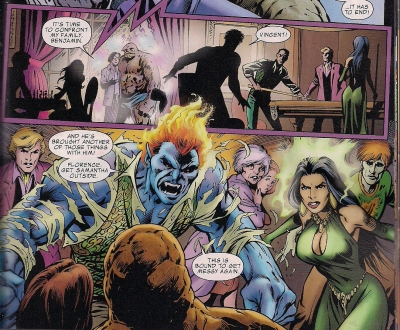 Davis handles Johnny, Ben and Stephen with aplomb – they sound like their classic selves and, better yet, look it. This being set a few years in the past means that the heroes are all in their classic outfits. I get that Marvel and DC feel they have to update their characters’ looks, make them more ‘realistic’, but I’ll take a Kirby or Ditko design any day, thank you.

The colours by Javier Rodriguez are suitably sumptuous for art this gorgeous, while Clayton Cowles does a nice job with the lettering (the backward magic here has Zatanna beat!).

While this story is self-contained, you could view it as part of a bigger tale by checking out August’s Daredevil and Wolverine annuals, also by Davis (and hopefully Farmer), and also featuring the Clan Destine. I certainly shall.