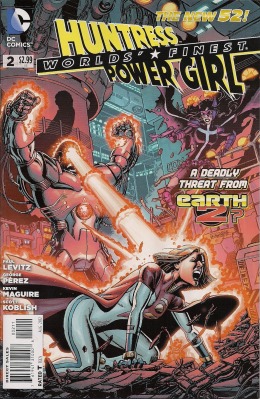 In the present, Huntress and Power Girl, refugees from Earth 2, battle radioactive man Hakkou in Japan. They don’t know what he wants, but suspect he has connections to Apokolips.

In the past, the heroines put together their new lives on Earth 1, as they conclude that the Darkseid sent packing by the Justice League is the same creature who sent Steppenwolf to raze their homeworld.

With the likely link to Apokolips, writer Paul Levitz makes the current day portions of this buddy comic as compelling as the flashback sequences. Last issue, it seemed that Hakkou was no more than a throwaway energy baddie, but here he hints that he knows Power Girl, Karen Starr, isn’t from this world. Could it be that the wrecking of Starr Enterprises’ quantum tunnelling generator wasn’t an accident, but sabotage?

And because he’s old enough to remember subplots and the concept of added value, Levitz leaves the main action to show us that Huntress’ theft of funds from Wayne Enterprises may not be as untraceable as she thinks.

In the past, we see Huntress, Helena Wayne, terribly smug about how easy it is for her to steal from her alt-Earth father, while Karen notes that her ‘body’s not working the same way’. We don’t find out what this comment means, but by cracky, it’s intriguing. As is the indestructible belt that crossed worlds with them – did someone come with it? And would they be friend or foe?

While she took an early injection of funds from Helena to set up her business, Karen no longer relies on her pal to bankroll Starr Enterprises. It turns out that some judicious mining makes for quite the fundraiser. And we meet Karen’s trusted associate Somya, as a flashback loops into the recent Huntress mini-series.

So, there’s lots going on, but still room for fun, as Karen introduces Helena to the ‘joys’ of playing a meteors video game for real, and the ladies partake of a picnic. It’s heartening how quickly Levitz has gotten into his stride with this book, with the heroines’ friendship front and centre at all times.

And courtesy of the two art teams, it looks splendid too. George Perez and Scott Koblish handle the super-villain action scenes in the present, while Kevin Maguire sticks mainly to character work in the ‘five years ago’ sequences. There’s not a page I don’t like, as Perez and Maguire show why they’ve become industry legends. Maguire’s eye for body language and fashion makes his every panel adorable, while the most powerful moment comes from Perez, as a blast hitting Power Girl homages the death of the Silver Age (or ‘real’) Supergirl in Crisis on Infinite Earths. 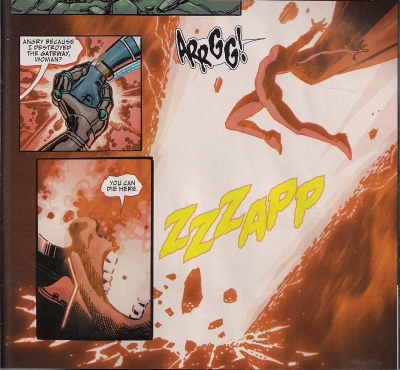 And doesn’t that shot of Hakkou in Perez’s electric cover illo call to mind Supergirl’s killer, the Anti-Monitor? Or am I imagining it all?

I don’t know if Huntress and Power Girl will ever make it back to Earth 2, but with issues as good as this set on Earth 1, I’m not sure I want them to.