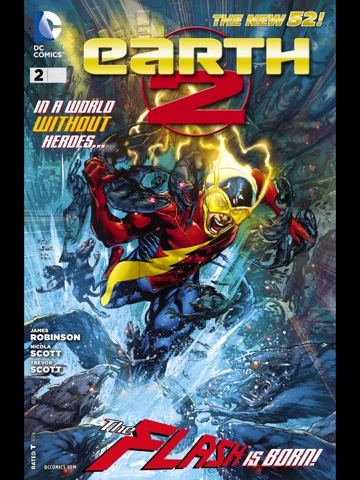 This issue looks set to sell well after the publicity surrounding the new Alan Scott’s sexual orientation. But the news that the latest Green Lantern is gay is probably the least interesting thing about this comic. All that happens with Alan is that he’s reunited with fella Sam in China, and has a surprise for him. Oh, and something cliffhangery occurs on the final page.

But really, that’s next issue stuff. This issue is choc-full of enticing events, most of them centred on Jay Garrick. Last month he came across a strange figure, fallen to Earth. Here he realises he’s meeting the Roman god Mercury. The deity has a warning for the world, and figures Jay’s the guy to pass it on. So, in his dying moments, he imbues the student with godly speed and suggests he runs from the arriving authorities. Soon Jay is discovering just what he can now do, helping people and gaining a new name in the tried and true manner – via a misunderstood comment. Having trouble stopping, Jay finds himself in Europe – where another costumed figure is waiting.

And wandering around the back streets of Jay’s city, a stranger mutters in foreboding manner.

Elsewhere, Mr Terrific crosses the dimensional barrier from his own Earth and quickly realises he’s on a parallel world. He’s immediately met by someone we might expect to be his biggest ally. Or rather, confronted by …

Writer James Robinson serves up a satisfying meal here, fleshing out Jay and Alan, to whom we were introduced last issue, and bringing Mr Terrific into the mix in a compelling scenario. And yeah, Alan’s scene with boyfriend Sam, sweet as it is, is the least interesting aspect of the book. ‘You’re turning me into a sap, sir.’ Alan jokes to Sam. But he is – it’s not a gay thing, because a similar scene with Alan and a girl would be just as dull. Still, I suspect the point will soon be moot.

As well as his personae, Robinson fills in more details of this world. We begin to see how the Apokolips invasion five years previously – which killed Superman, Wonder Woman and Batman – has changed daily life. For one thing, there’s a World Army on the lookout for alien warlord Steppenwolf. And scarier yet, vicious Apokorats – Boom Tube stowaways – remain on Earth to terrorise humanity. Plus, the opening spread provides such tidbits as a takeover of Waynetech, a tribute to one of the fallen heroes and news of boxer Ted Grant’s latest bout.

It all makes for a story that’s as fascinating as it is entertaining. And once more, penciller Nicola Scott matches Robinson’s creativity, her luscious lines making the story easy and exciting to follow. Her heroes exude nobility, while the villain Mr Terrific meets is sinister even in a sharp suit. And speaking of suits, Jay Garrick’s new look isn’t a match for his classic togs, but after a few panels I was liking it for itself. It’s an interesting marriage of Jay’s street clothes – a tracksuit – and Mercury’s godly headwear. In a nice touch from Alex Sinclair (or co-colourist Pete Pantazis) Jay’s super-suit, when it reverts to his regular duds, keeps the colours of The Flash. And Trevor Scott embellishes with style, bringing the right tone to settings as diverse as the US, Poland and China.

In just two months Earth 2 has become my favourite DC title – its blend of tradition and today, with a splash of futurism, is what the New 52 should be about.