Longtime DC comics editor Julie Schwartz was known for a number of things – reviving the Golden Age characters, pioneering parallel worlds, stories packed with scientific facts, tales based on unlikely cover images … but who know he was a keen housebreaker (click on images to enlarge)? 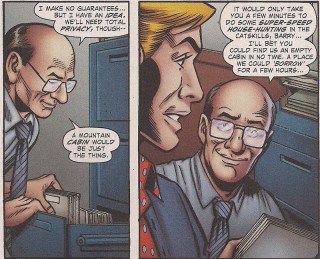 That’s what happens when heroes come to visit from a parallel Earth, you get so excited that your morals go out the window. Julie’s having fun, and that’s what I had with this adventure looking back to the 1970s JLA book. ‘Enter Justice League Prime’ sees Wonder Woman, Zatanna, Flash and Green Arrow follow Adam Strange to the alternate world – supposedly the one we’re all sitting in – when he’s tossed there/here after a problem with the Zeta beam that carries him across the universe. Adam’s lost his memory and if the JLA can’t make him remember who he is, they won’t learn what evil alien Kanjar Ro is planning back in their own reality. Can Julie somehow succeed where the heroes failed?

Back on Earth 1, guided by Red Tornado, Green Lantern and Hawkman are trying to track down Kanjar Ro, only to fall victim to his new Zeta beam powers in probably my favourite Retroactive panel yet.

Of course, Kanjar Ro is defeated when the rest of the team returns with Adam, in what can pretty fairly be described as a superhero romp. For there’s no angst here, no one gets too worried at the prospect of Kanjar Ro becoming all-powerful. They make concerned noises, but really, the JLA is having a good time solving that day’s puzzle.

Cary Bates certainly looks to have had a good time writing it up, giving us a typically Seventies story while adding a little more sly humour than he was allowed back then.

I love to see the Super Friends just hanging out in that satellite which Bates really should have mentioned was ‘in geosynchronous orbit 22,300 miles above the Earth’. Still, I forgive him, for this is a cleverly plotted done-in-one that fits right in with the fare we were getting 30 years ago. Bates sets the story a little while after his run on the book, allowing Zatanna – awful ponytail and all – to be on hand for teleportation and disguise purposes.

Oh yes, the disguise. How great is Wonder Woman’s look when she, Zee and Barry visit DC Comics? She’s jumped straight off the cover of issue #168 of her own book, back in the Sixties. And dig those flares on Barry!

Other nice touches include Barry’s faith in Julie following their previous encounter, the old Hawkman/Green Arrow bickering, Wonder Woman’s sisterly ways (‘Fortitude, Alanna’) and the narrative’s calling out to ‘dear reader’. That’s how it was, and it’s sweet to revisit the period.
JLA illustrator of the time Dick Dillin having passed on, other pencillers pick up his baton, with Gordon Purcell handling the Earth Prime scenes and Andy Smith the Earth One pages. Jose Marzan Jr inks Purcell, while Smith inks himself. The split works well. Smith gives us solid, straightforward superheroics while demonstrating a real knack for interestingly angled shots. And Purcell has plenty of panels of characters apparently looking directly at us, as if the JLA can’t forget that they’ve entered a world where they’re viewed as comic book characters. Carlos Badilla keeps the colours light and bright, while Wes Abbott ensures the letters are neat, but not too perfect.
If you were reading in the Seventies, you’ll likely enjoy this. If you weren’t, but like light-hearted superheroics, ditto. It’s not just the JLA that travels a long way with this story, it’s a massive nostalgia trip for me too, right down to the cover by Smith, 1970s stalwart Ernie Chan and Badilla.
The reprint is also an Earth Prime story, also by Cary Bates – with Elliot S Maggin, Julius Schwartz, Dick Dillin and Frank McLaughlin – but unlike the new offering, it’s incomplete, being the first half of a two-part team-up with the JSA and featuring Bates and Maggin. DC did the same thing in last week’s DC Retroactive 1970s Wonder Woman #1 and it’s really irksome. As with the Diana Prince story, they might have directed readers to the conclusion, this time in one of the Crisis on Multiple Earths volumes (see below – hey, I’m being helpful!), but don’t.
I hope this trend for messing up the back half of the book doesn’t continue, as I’m enjoying the Retroactive project overall. Heck, I’d love a regular DC book telling new stories from old continuities. Anyone else?
http://rcm.amazon.com/e/cm?t=t0a74-20&o=1&p=8&l=bpl&asins=1401209572&fc1=000000&IS2=1&lt1=_blank&m=amazon&lc1=0000FF&bc1=000000&bg1=FFFFFF&f=ifr