Considered in isolation, this issue’s cover –  a blood-spattered Mera – is DC going over the top. Remember what was on a variant for Flashpoint #2, though, and the company seems a model of restraint. Is it only longtime fans like me who don’t think the promise of bloody violence should be used to sell a comic book?
The scene doesn’t appear inside this Flashpoint spin-off, but Mera’s death at the hands of the Amazons does motivate the action as Aquaman and his war party – half-brother Orm, sister-in-law Siren and loyal general Rodunn – seek revenge. The plan is that Orm and Siren will infiltrate New Themiscyra and murder the Amazons’ secret weapon, the earth-shifter Terra, presumably as a precursor to the Atlanteans’ full-on attack.
The mission fails, as Queen Diana of the Amazons’ aunt, Penthesilea, skewers one of them. When the advance party fails to report in, Rodunn and Aquaman prepare for a retaliation, and that’s just what they get, with Wonder Woman appearing on the final page.
Interspersed with the mission behind enemy lines we’re told the origin of Emperor Aquaman, and it’s a mash-up of various versions from DC continuity. There’s American father Tom Curry, Atlantean mother Atlanna, a child cast-out … so far, so familiar. Where the story diverges is that Arthur Curry is returned to Atlantis as a teenager, where he rejects the human heritage he sees as soft and embraces the way of the undersea warrior.
While the present day story has an exciting immediacy to it, the flashback has the timelessness of a folk tale, in large part due to the intelligent colour choices of Kyle Ritter and the fairy tale font used by Jared K Fletcher. Tony Bedard captures just the right tone for these sequences, giving us a storybook feel that manages to avoid tweeness. And artists Vicente Cifuentes and Diana Egea capture the passion of man, mermaid and their troubled son. Cifuentes looks to be inking Ardian Syaf on that cover, while Ritter colours.
The creators do a fine job in the current day scenes, too, with Bedard setting out the stakes for his bloody-minded players, and Cifuentes and Egea bringing fire to the page
– the former pencils the book and inks some pages, the latter inks the rest. I see echoes of some of my favourites here – Phil Jimenez in Penthesilea, Brian Bolland in Ocean Master – but that’s likely just me, as the two sequences have internally consistent looks (click to enlarge images). 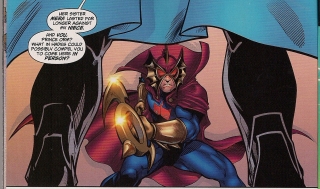 On the one hand, I don’t know why quite so much space is spent on the origin sequence as it either won’t stick, or will be retold again soon, post-Flashpoint. On the other, it may well be my favourite telling of Aquaman’s first few years, with panels such as these.

There’s also a bonus detail, as we learn that the sea creatures this Arthur talks to includes birds. I wonder if that will be taken into post-Flashpoint continuity.
This story concludes next issue. Tune in for more impressive comics craft and, I’d wager, someone else getting gutted.