So last issue’s scheduled stop in Los Angeles, in which Superman teamed up with Muslim superhero Sharif, was pulled by DC, with one rumour saying it was because Superman rescued a cat from a tree.

This issue, Superman rescues a cat from a roof. Make of that what you will.

The Grounded storyline trudges towards the finish line, with Chris Roberson still scripting, trying to make sense of J Michael Straczynski’s set-up. If you’re late to the party, back in Superman #700 a bereaved woman berated Superman, saying he was a bit rubbish because her husband died while he was off saving the world, or something similarly inconsequential. That sent him off on a walking tour of the United States to reconnect with the people.

And it was bad, as Superman reconnected with the people by bullying and patronising them. For reasons not at all to do with rotten reviews, JMS left the book and DC brought in Chris Roberson to script from his outline. And he made the book shine, sidelining the Superest Hobo angle and letting Superman have actual adventures, involving flying, doing good and inspiring people.

That’s how I expected this issue to be too. Instead we have Superman summoning Superboy and Supergirl to announce that from now on he’s going to be doing good without being a public hero. He will be a super-speed blur, so that he doesn’t frighten folk and attract their resentment. Gobsmacked, likely realising the stupidity and unworkability of the idea, Kara and Conner quietly disappear from the book. Superman leaves his costume on a tree trunk.

Off Clark goes to the Newberg, Oregon, branch of not-Starbucks coffee chain Sundoller (sic), where, instead of pointing out the egregious spelling error, he calls boss Perry White to remind him that he’s not died. Knowing Perry would quite like some work out of him, he announces that he’s writing a story but, in the way of Daily Planet reporters, doesn’t bother to run it past the chief first.

The op-ed piece, entitled Must There Be a Superman?, is noticed by a barista, who suggests Clark talks to another customer, a regular clad in a Superman sweater. Said chap reckons Clark’s off his head, and just doesn’t ‘get’ what Superman’s all about. He drags the protesting hack into the streets, where various passers-by are quizzed about their feelings towards the Man of Steel.

Is a little boy afraid of Superman? No. Does a woman trust Superman? Yes. Does a man believe Superman kills his foes? Of course not. Does a family resent Superman for having powers when they don’t? 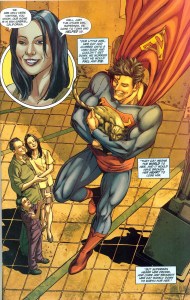 No, he rescued their cat from a roof! Click to enlarge –  emphasis on the aaaaah.

Clark and the customer debate the benefits of Superman, with the latter having to be reminded of the hero’s symbolic importance. We’re getting towards some kind of resolution when a TV report screams that Lois Lane has been captured by a super-powered woman in Seattle, and she’s threatening to kill her. Let’s see you stick to your guns now, Mr Kent … go find that tree trunk, huh?

We never do learn the customer’s name, ace reporter Clark not bothering to ask. I was fully expecting him to be one Joe Siegel or Jerry Shuster, but apparently he’s just some guy who works in politics. Maybe he’s the real-life mayor of Newberg, I dunno.

I do know that while I like the points it makes, this instalment is the worst for some time. Superman has taken several steps backwards, having realised months ago that he’s been depressed, and managed to cheer up. Here he’s Joe Misery once more, convinced he does more harm than good and trying to pass on his gloom to happy young super-teens. The tale has all the hallmarks of the early issues, lacking the wonder, the sheer joy Roberson has brought to the series, making me think JMS had a hands-on approach this time.

The art’s a melange of styles, with various hands on the illustrative tiller – Diogenes Neves (Nueves, if you believe the cover), Eddy Barrows, Jamal Igle, Oclair Albert, JP Mayer and Jon Sibal – but it’s all decent enough, given the, presumably, quick turnaround. Only two of these creators, Barrows and Mayer, are in the solicits but they contribute just two pages. I suspect that a couple of months back DC decided to pull last issue’s story, featuring Sharif (the former Metropolis hero Sinbad), for whatever reasons, and then did some surgery to this once. It’s speculation, obviously, but the pedestrian, documentary-style vignettes are miles from anything the talented Roberson has previously given us.