Posted on June 3, 2011June 26, 2018 by martingray1
So DC has announced the first ten of its 52 planned new #1s. I’ve little doubt most of you will have seen the list, noted the creative teams and eyeballed the images, so how about some drive-by gut reactions, based on precious little? I’ll start, please join in.

Wonder Woman #1 by Brian Azzarello and Cliff Chiang I’ve not read many Brian Azzarello comics. His Superman run is my least-favourite approach to the character ever, and his use of Wonder Woman there was terrible – sword-wielding bint behoven to some upstart goddess. His Hellblazer run didn’t ‘get’ John Constantine. His story in last week’s Strange Adventures was really not my cup of tea. But I enjoyed his Dr Thirteen: Architecture and Morality tale, and his Flashpoint: Batman this very week (reviews of Strange Adventures and Batman are accessible at right). Who knows, he may surprise us with a heretorefore unsuspected whimsical side, though it’s unlikely, based on what I’ve seen so far … his stuff is awfully serious. And the bloody sword bodes ill, I’m not a fan of Diana as armed warrior. ‘Kick ass’ is fine, ‘slice ass off with sword’, less so. Cliff Chiang, I love. He did a fine job with traditional Diana in Brave and Bold #33 last year. It’s just a shame he’s having to draw that dire, joyless new costume. I’ll be buying the first issue. But if anyone notices me moaning hugely, point out that I should stop there, tell me it’s not worth the pain of reading a once-favourite character in yet another revamp that’s entirely inappropriate to Diana. You remember her, don’t you? Tall girl, superheroine, not one to grab a pointy weapon at the first sign of trouble. A symbol of hope. As well as being a superheroine, she had a private life, with friends and home and everything. I miss that lady.

Aquaman #1 by Geoff Johns and Ivan Reis  Look at that snarl, check out the trident brandishing. This won’t be your Daddy’s Aquaman, we’re going get a violent sea king, with plenty of gore, Geoff Johns having a tendency to go the ‘dark’ route. I don’t know if that’s a reflection of his preferences, or due to an educated belief in what sells. Either way, it’s not my cup of tea – I’m all for Aquaman being in intense dramas, such as the killing of Arthur Jr in the Seventies series, but I don’t want him as a ‘gut first, ask questions later’ type. I’ve no problems with Ivan Reis, he seems capable of turning out high quality work to a monthly deadline.

Flash #1 by Brian Buccellato and Francis Manapul Now here’s a surprise, Flash written by the book’s colourist. Obviously encouraged by my constant praise, he’s spreading his wings. I’ve nothing to base an opinion on, so let’s see what Brian can do. There are precedents for members of creative teams to try their hand at writing – inker Al Gordon had a crack at Legion, as did colourist Tom McCraw. Todd Klein had a long run on Omega Men, while inker Keith Champagne has written a few comics. Scott Kolins wrote a Solomon Grundy mini. Aaron Lopresti recently gave us Junkman in Weird Worlds. And inker Karl Kesel has written dozens of excellent comics over the years (and if he’s not writing any of the 52 new books, DC has missed a trick). George Perez made Wonder Woman popular again, while Joe Kubert is in a league of his own. So let’s see what Brian can do – presumably he’s still colouring too. Francis Manapul has made a splash on Flash since Barry Allen’s underwhelming return, let’s see if he can turn out the book monthly (he also makes TV shows, talented bugger). Maybe a fresh start will make Barry popular with today’s readers … but I still want a Wally book.

The Fury of Firestorm #1 by Ethan Van Sciver, Gail Simone and Yildiray Cinar And there you go, another comic artist writing. I’m assuming he’s co-plotting with Simone, while the latter scripts, which guarantees smart dialogue. I’ve never seen Simone collaborate with another writer – she certainly doesn’t need help, so the fact that she is partnering someone implies this is a project dear to her heart. Well, Firestorm’s been a favourite of mine since his Seventies debut, with his peak being the The Fury of Firestorm title by creator Gerry Conway with artist Pat Broderick. The new guys have a lot to live up to. I’m hopeful, but if it’s heavily tied in to Brightest Day, I’m out. I’ve no love for all the cosmic nonsense offered by that book. It seems Ron Raymond and Jason Rusch will now be high school students, which sounds like a big old reboot to me. Darn. I like the way the lads have developed over the years, why throw it away? Oh yes, the Altar of Youth needs sacrifices.  And what’s with that Anti-Monitor-like Firestorm? Yildiray Cinar is a big plus, having been improving month on month in his recent Legion run. 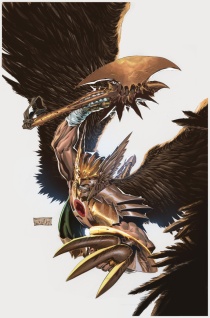 Hawkman #1 by Tony Daniel and Philip Tan Oh, for crying out loud, just look at that cover, with a Hawkman so ‘fierce’ he’s actually high camp. Hawkman as Wolverine – no thank you. The best thing this series could have going for it would be a clean slare – a rebooted DCU allows for that. But in a letter to retailers yesterday, DC’s VP Sales, Bob Wayne, writes: ‘this is the launch of the New DCU. It is not a “reboot.” ‘. Then again, CBR tells me that ‘Carter Hall’s skill at deciphering lost languages has led him to a job with an archeologist who specialises in alien ruins – but will the doctor’s latest discovery spread an alien plague through New York City?’ Intriguing. Tony Daniel’s Batman didn’t click with me, but it could be that Carter Hall is the character he was born to write. Based on such titles as Outsiders, Philip Tan will bring an intensity to Hawkman and His Performing Talons, though again, I’m not a particular fan. I’d love to be surprised by this comic. Oh, I’ve just found out that Hawkman gets an adjective. Wait for it … ‘The Savage’. I suspect #1 will be my only. 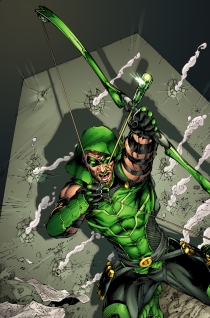 Green Arrow #1 by JT Krul and Dan Jurgens Jurgens on art means this book is going to look good, and I’ve enjoyed JT Krul’s Teen Titans work. I’ve not bothered with his Green Arrow, due to Star City being revived as Fairyland, but with a new direction, this is worth a punt. It certainly sounds like a complete restart, as ‘an orphaned Ollie Queen takes up the bow and arrow‘. This could be a good read once the groundwork is laid – I’m as sick of seeing Ollie’s origin as I am of being told Booster Gold’s.

Justice League International #1 by Dan Jurgens and Aaron Lopresti And straight away I’m disappointed. I love Dan Jurgens’ writing on Booster Gold, and was a fan of his Superman work, but it’s Judd Winick who won the JLI their title back with the recent year-long Generation Lost book. Where the heck is he? Jurgens has written the JLA previously, to not especially memorable effect. Aaron Lopresti on art, though? Fantastic, he did great work on Generation Lost. The costume tweaks look great – but who’s the bumpy chap? Googles … aha, August General-In-Iron from the Great Ten, which I never read. Anybody? And who’s the black-haired lassie? Donna Troy? A wigless Black Canary? A peculiar Gypsy. I’m intrigued. I’m thrilled to see Vixen in there, she’s always a good addition to a book. It seems the set-up is “internationally-drafted superheroes” who “fight each other and their bureaucratic supervisors as much as they do global crime” which sounds like less than a direct continuation of the recent book. Still, if it gives us a rest from Max Lord, I’ll take the not-a-reboot.

Mr Terrific #1 by Eric Wallace and Roger Robinson Now this is out of left field … a JSA member in the supposed JLA list. Are the JSA being retired yet again? Is Mr T one of the seven so-far-unnamed JLA members? I get sick of him in JSA, what with constantly being told how perfect he is, so it’ll be interesting to see him operate without anyone around to worship him. I’m not keen on the new look, what with the Fair Play tattoos – I like his current leathers. I haven’t read much Eric Wallace – probably only his Tattooed Man, Ink book. I never bothered with his Titans series cos it stars Deathstroke and Cheshire, two overused, overrated villains. So, I’ll be interested to see what he can do – basically, I like Mr Terrific, I’d just like him to be less terrific occasionally. Roger Robinson, I don’t know at all, not having read Azrael, Eradicator or something called Sludge. But looking online, he seems to be rather good. And that cover is ruddy excellent.

DC Universe Presents #1 Deadman by Paul Jenkins and Bernard Chang This could be great. Bernard Chang, late of Supergirl, produces lovely linework, based on strong storytelling with expressive figurework. That makes him perfect for a book featuring a spooky character who gets involved in dramas big and small. I take it that’s what the story in this new showcase series is about – what else do you do with a Deadman? Brightest Day, you say? Please don’t. On the writing side, Paul Jenkins has produced tons of entertaining comics, including a good run on Spider-Man. He also wrote Sentry: Fallen Son … but I’m more optimistic than not.

Captain Atom #1 by JT Krul and Freddie Williams II We might have expected Judd Winick to be continuing Cap’s story post Generation Lost, but here’s Krul again. I’m not taken by the would-be hook that he’s struggling to hold on to his humanity, but we’ll see. The new look, please God no – the energy Mohican and reptilian brow are just terrible as seen on Stanley ‘Artgerm’ Lau’s cover. Williams is a more than decent comic artist, having produced excellent illustrations for the likes of the Flash and Robin. I’m less of a fan of his more recent JSA All-Stars work, which he drew digitally. Mind, the shininess he brings to the page these days might suit Cap.
What do you think?

18 thoughts on “The New DC Explosion – The Great Ten?”