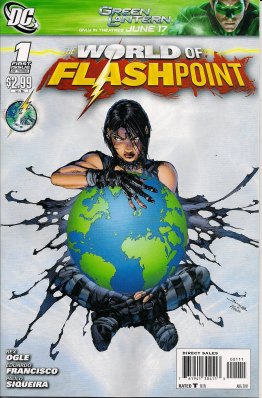 DC gets in on Marvel’s events act with a mini-series extrapolating on the world in which its latest crossover is set. Difference being, this is good stuff.
The star is Traci 13, a teenage magic user who’s been knocking around the edges of the regular DC Universe for years. Here she tries to make sense of the world around her, six months after her mother and brothers died in the sinking of Paris, leaving her and father Dr Terry Thirteen, the Ghost Breaker, alive. Something – her magical nature, perhaps – lets her know that this isn’t how life should be. She’s flashing back to adventures with Superman, Blue Beetle and other DC heroes, memories of a life she never lived. Traci consults the psychic Madame Xanadu, who is, frankly, useless, sending her packing with fortune cookie philosophy, then fretting because she turns up the tarot deck’s Death card – surely that simply implies that change is coming?
Traci heads for her new home in the Swiss Alps, where her dad and the organisation known as the HIVE – comprising faces familiar from the regular DC Universe, among them Dr Light II, Red Star and, er, Captain Nazi – are trying to work up a plan to take back the world. For it’s not just a matter of the Atlanteans having Western Europe and the Amazons, the UK: there’s also Africa under Grodd, India under the Outsider and more. First off, the HIVE members are ready to take drastic action to protect other countries from the Amazons and Atlanteans. And Traci, who grows more powerful by the day, isn’t having it …
In the first script I’ve read from him, DC editor Rex Ogle knocks it out of the park, presenting a sympathetic, well-characterised protagonist in a hugely intriguing world. Yes, the Flashpoint Earth may be the brainchild of Geoff Johns, but Ogle brings it to life with such details as as the goods on sale on the streets of New York, and the place of the JSA in this world’s past.
Drawing the book, pencillers Eduardo Francisco and Paulo Siqueira bring an intensity to such scenes as the flooding of Paris, and Traci’s standing up to the council, that repays attention. The tweaked characters – a scarred Traci, crone Madame Xanadu, tweenie Ra’s al Ghul – are fascinating to watch. Francisco inks himself, while Roland Paris gets behind Siqueira, making this a good-looking comic. Stefani Renee – another new name to me – gifts us a stunning colouring job, with some wonderful lighting effects.
The striking cover is the work of Brett Booth and Andrew Dalhouse. If you’ve not caught their work on current issues of Justice League, do yourself a favour and check it out.
World of Flashpoint could have contented itself with being World of Exposition, and still sold, but here the creatives are giving us something more – a very entertaining, well-done story on which to hang the information. This could wind up my favourite series of the event.
http://rcm.amazon.com/e/cm?t=t0a74-20&o=1&p=8&l=bpl&asins=1401222919&fc1=000000&IS2=1&lt1=_blank&m=amazon&lc1=0000FF&bc1=000000&bg1=FFFFFF&f=ifr

4 thoughts on “World of Flashpoint #1 review”