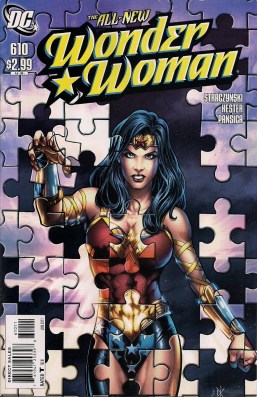 Diana wakes up in a hospital bed, meets Dr Etta Candy, Nurse Diana Prince, Dr Steve Trevor and Mrs Mavis Infodump.
Actually, it’s Myra Clotho, but it might as well be Mrs Mavis Infodump, as she tells Diana in tremendous detail that the life she’s living is indeed a pretence. Diana’s greatest enemy has changed the world, her protector gods have retreated, but she – the embodiment of Fate in this non-reality – has woven a secret strand of Diana’s life below the, er, official strand of life. So she’s not Wonder Woman, she’s Under Wonder Woman. And the true source of Diana’s power is … a chicken in a basket. Look, I’m not making this up (click to enlarge/giggle):

Stronger than Hercules, wiser than Athena, tastier than a Harvester pub lunch … talk about something coming out of left field. It’s not a magnificent eagle on Diana’s chest, it’s Foghorn Leghorn, I say, Foghorn Leghorn. Still, as everything points towards this ‘era’ being on the outs, I won’t cry fowl; the dead bird will fly the nest soon enough.
This issue also has DC Universe burlesque act the Morrigan sisters mooching about being eeevil, but more and more it seems they’re not important. the master – or rather, mistress – manipulator is the being who has changed reality, banishing the true Diana. Old Biffy Clyro – sorry, Myra Clotho – bangs on about the ‘avatar/spirit of vengeance’ for ages without bothering to name her. And Diana doesn’t trouble the old biddy for this trivial knowledge before she – ooh, never saw that coming – drops dead.
Honestly, scripter Phil Hester continues to make a silk purse out of the sow’s ear of a storyline J Michael Straczynski bequeathed him – or at least, the Primark version of a silk purse – but it’s getting harder and harder to care about any of it. This is the villain. No, these are the real villains. Ah, but have you met the real, real villain? Despite effective, lyrical imagery and good moments such as Diana demonstrating love for her enemies, showing the fighting prowess of classic Wonder Woman and restoring the memories of Artemis, I just want this to be over.
Meanwhile, it at least looks purdy. Eduardo Pansica essays some fine action scenes, stylishly inked by Wayne Faucher and Eber Ferreira. And in Myro Clotho they give us probably the most realistic old lady I’ve ever seen in a comic. Their NuSteve Trevor, debuting here and a likely holdover when we get to the book’s next reality, is every bit the handsome young hero. An ‘arrows and bracelets’ scene is thrilling to see. And everything is gorgeously coloured by Pete Pantazis and nicely lettered by Travis Lanham.
And the jigsaw motif cover, by illustrator Don Kramer and colourist Alex Sinclair, is excellently conceived and superbly executed.
But I can’t help feeling that all these creative gifts could be put to better use elsewhere. Specifically, on a book featuring a classic Wonder Woman, rather than the Diana we have here – ever improving, but strangled by a storyline too convoluted even for a superhero soap.
And there are still four issues to go …