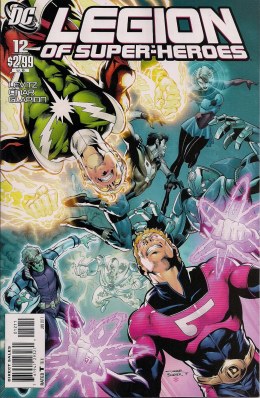 It’s the Legion of Super-Heroes vs the Legion of Super-Villains in an action-packed instalment. Given that LSV leader – well, tyrant, actually – Saturn Queen has only recently begun gathering her troops I was expecting a longer preamble prior to any meaningful confrontation, but here we have the new LSV surprised by the 31st century’s super-teens. As for who comes out on top, there are bumps and bruises on both sides after a series of killer confrontations.
My favourite moments include Lightning Lass vs Lightning Lord – it’s always fun when the sizzling siblings face off – and Phantom Girl showing Atta what’s what. This second sortie sees writer Paul Levitz play with ghost imagery, which seems entirely appropriate when dealing with someone who calls herself Phantom Girl, but it’s been surprisingly little done; I like it.
I also like Mon-El, at the shattered Rock of Eternity with Sperm Lantern Dyogene, stressing that he – the new Green Lantern – really isn’t the last hope against some still undescribed enemy … there’s the entire Legion.
Then there’s a tremendous scene of Brainiac 5 performing multiversal surgery on Starboy, still a jabbering wreck after various time travails. As images of different DC Star Boys dance above Thom Kallor’s head, we see how much faith Brainy has in Dream Girl. He leaves her to monitor the rest of the operation while he leads a team to his homeworld of Colu, where Saturn Queen and her cronies are attempting to learn the whereabouts of the mysterious ‘world of the wise’ she hopes to raze. In battle with rogue Coluan Questor, we see that Brainy is quite the tough nut when he wishes to be.
Brainy does deserve a demerit, though, for not bothering to find out the nature of the information time expert Harmonia Li offered him last issue regarding her cuplability with regard to recent disasters. Who knows what useful intelligence she might have provided?
And someone on the creative team loses a point for dropping the ball with regards to Ultra Boy’s defeat of LSV wannabe Stegus, a super-dinosaur – one minute he’s standing by Lightning Lord, about to bail on the fight, the next he’s over Ultra Boy’s shoulder, having been defeated. I know Jo Nah is fast, but we might have been shown something.
Still, this is a very rewarding issue. Levitz plots like the veteran he is and scripts like a talented tyro, while penciller Yildiray Cinar produces wonderfully zingy layouts and bombastic moments. The pair are especially proficient at depicting the evil of Saturn Queen – Levitz writes her as a callous cow, Cinar presents the evil in her eyes, the cold confidence in her body language. And they show that Lightning Lord, charged with supervising  the LSV’s answer to the Legion’s traditional membership trials, is anything but a spineless lackey.
Levitz and Cinar also have someone dump Earth-Man on his overconfident arse. Hurrah! 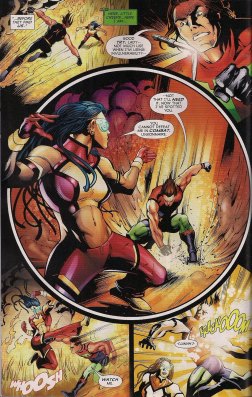 Inking Cinar this time is Jonathan Glapion, who adds a scrappy finish to the fight scenes that makes them just that little bit more intense (click to enlarge). The quieter moments run more smoothly. If I may give our artists a note, it’s to remember that Mon-El’s hair is distinctive, jet black and very straight – here, he looks like Superboy in a green union suit.
Said green, along with other lovely hues, is provided by regular colourists HiFi, while John J Hill supplies the fine lettering. And that stonker of a cover is the work of Cinar with, the interior credits say, Glapion; but as it’s actually signed by Cinar and ‘Faucher’, I’ll plump for Wayne Faucher, the books oft-inker. Hi-Fi colours, separating two distinct planes of activity with ease.
That’s a year’s worth of the new Legion of Super-Heroes comic we’ve had now. It’s good to be back in the 31st century.

9 thoughts on “Legion of Super-Heroes #12 review”