You know summer’s coming when the big events start to arrive. DC has Flashpoint on the way, but Marvel gets in first with Fear Itself #1, the first of seven issues and umpteen spin-offs and crossovers. It should be a risky strategy – if the reader buys into the central conceit, they’ll purchase dozens of comics, perhaps a fair few they wouldn’t normally follow. But if the reader isn’t engaged by the beginning of the story, they could decide to skip everything connected to it.
Note, I said ‘should’. In practice, these things sell gangbusters. There’s no doubt the Fear Itself event will be a hit, given the Might of the Merry Marvel Marketing Machine (I have no idea why I’ve gone upper case … he’s not even dead, but the Ghost of Stan Lee seems to be visiting). But let’s judge the comic on its own merits.
And there are many. Matt Fraction is one of Marvel’s better writers – sorry, ‘architects’ – while penciller Stuart Immonen and inker Wade Von Grawbadger (for some reason, not credited on the title page) have been making artistic magic together since the Nineties. So there’s no surprise that this is an entertaining, impressive superhero comic.
Our tale begins with Steve Rogers and aide Sharon Carter hanging around a demo in New York. It isn’t explained just why ‘America’s top super-cop’ is needed on the scene; certainly he doesn’t do any good, as citizens annoyed by plans to build on Ground Zero (I’m guessing, it’s not explicit) begin fighting with police. Eventually he’s bashed on the head by a hurled brick … should’ve kept that helmet, Stevie, old fruit. It’s unbelievable that these agents with decades worth of experience in spying, wars and super-soldiering have no clue as to how to calm things down.
Meanwhile, over in Antarctica, the Red Skull’s daughter, Sin, wrecks a nest of old Nazis – that leaves only a couple of hundred across comics, I guess – and murders her father’s long-lived loyalists. She finds the Mjolnir-style magical hammer envisioned in a dream and, being deemed worthy by unseen forces, is able to lift it, giving her a new look and the ability to channel some old god named Skadi. The Encyclopaedia Britannica tells me Skadi was the goddess of snowshoes, which is nice.
Back in the US, the Avengers gather to hear Iron Man announce he will Cheer Up America by employing folk to build a new Asgard in Broxton, Oklahoma, the previous, terribly drab one having been mercifully destroyed in the last massive event, Siege.
As it happens, Thor’s father, Odin has other plans. Quite reasonably, he points out that Asgard can be restored in the Heavens with a snap of godly fingers. Quite unreasonably, he assaults Thor when the thunder god makes a case for mortal and immortal working together. The father of the gods’ traditional arrogance and temper is dialed up far beyond anything we’ve previously seen, as he brutally attacks Thor not once, but twice, to make his point. That done, he orders his Aesir ‘children’ off Earth and forward to a new beginning for Asgard. Disappointingly, not even the free-spirited Warriors Three raise their voices in protest at Odin’s attitude and actions. The only thing I can think is that Odin, aware of Sin’s communion with Skadi – and subsequent meeting with a rival All-Father known as the Serpent – is trying to protect his people.
The issue ends with a series of magical hammers being called down to Midgard by the Serpent as part of his plan to spread fear among the people of Earth before he faces Odin, who imprisoned him long ago
There’s an epic feel to this issue, a sense that powerful forces are gathering and Earth will become their battlefield, its people mere ants to be crushed. That feeling is intensified by the presence of the unspeaking Watcher, who shares my favourite scene of the issue with Odin (click to enlarge).

That’s not all we have in the way of excellent moments, though; there’s the contrast between Iron Man’s grand plans for Asgard and the economic realities for regular Broxton folk; the Avengers’ incredulity that New Yorkers should riot without being mind-controlled; the fun of seeing Earth’s Mightiest Heroes drink with the Asgardians (Volstagg definitely sees himself as Brian Blessed); Thor’s entirely correct defiance in the face of his ass of a father. Verily, tis good stuff: Fraction’s narrative is expertly paced, his characters compelling – well, except for Steve Rogers, who is in speechifying bore mode. Gods, monsters, ancient Nazis, a Watcher, mercurial fathers and children … this one may just have it all. Ambiguity too – I suspect Sin, in that third narrative box, is more correct than she knows. 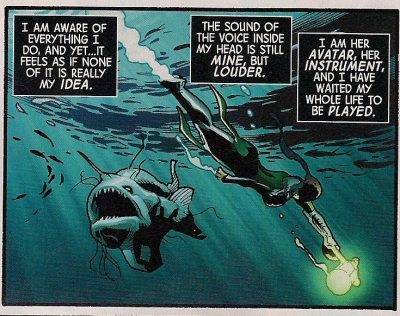 Immonen and Von Grawbadger’s illustrations pulsate with power and passion – I’d love to see them on the Thor book in the future. The character designs for Sin and Serpent are top notch – she the majestic warrior, he the spindly weaver of plots. Adding to the superb look of the pages is colourist Laura Martin, who knows how to use tone to control mood; and letterer Chris Eliopoulos homages the great John Workman’s style, while showing us a few tricks of his own. Editors Lauren Sankovitch and Tom Brevoort have assembled not simply a bunch of talented creatives here, but a true team. I don’t know yet what the quality of the tie-ins will be, but this book bears watching.
http://rcm.amazon.com/e/cm?t=t0a74-20&o=1&p=8&l=bpl&asins=B004SRS4IG&fc1=000000&IS2=1&lt1=_blank&m=amazon&lc1=0000FF&bc1=000000&bg1=FFFFFF&f=ifr