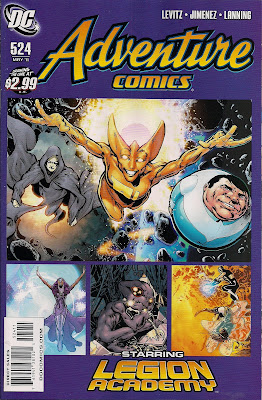 Superman isn’t the only character grounded this week. Over in the 31st century, the new students at Legion Academy have some privileges revoked by instructor Duplicate Girl after a spot of tomfoolery last month. But Chemical Kid isn’t having it – credit card problems indicate that something’s not right with his father, so he grabs a few pals, ‘borrows’ an old Legion cruiser and sets off for his homeworld of Phlon.
It turns out that he’s correct – his father is at the mercy of Black Mace, an old foe of the Legion. Chemical Kid, Comet Queen, Gravity Kid, Glorith and Dragonwing gamely take on the experienced, older villain and aren’t doing too badly until another member of the Taurus Gang, Mystelor, ambushes them.
At least I think it’s Mystelor – I’m assuming she’s had a makeover courtesy of ever-imaginative artist Phil Jimenez, who also does a bit of world building with his take on the organic communties of Phlon. The action scenes are big and dynamic, as Jimenez displays his gift for composition. Elsewhere, he gets to draw longtime Academy members Crystal Kid, Power Boy, Nightwind, Lamprey and the unloved little grey chap getting the least-inspiring recruitment speech ever from Cosmic Boy. It boils down to ‘You might not make Legionnaire, but even if you do, it’s rubbish’.
It’s an amusing moment from writer Paul Levitz, but it sets up tensions for the future nicely – will any of the senior class make the big leagues, and if they don’t, what’ll they do? Join the Substitute Heroes? The Science Police? Go solo, or – gasp – turn to villainy (to be fair, Cosmic Boy doesn’t present this last as an option). Given that, as Duplicate Girl says here, she and husband Bouncing Boy joined without any training, it’d be a bummer were students who’ve trained in the use of powers, fighting techniques and law enforcement for years to be denied membership. But times have changed.
The question won’t matter to the kids on Phlon if they don’t survive their trip; certainly, they look a tad outclassed, bar top of the class Gravity Kid, whose knowledge of Black Mace almost turns the tide. I do like this guy, he’s smart, committed and has a great Seventies throwback costume – if only his facial hair didn’t make it look like something nasty had been smeared on him. A little texture, please!
Revelations this issue include Variable Lad’s relationship to a certain grumpy Legion medic, and the origin of Chemical Kid, who, we see, is more than the spoilt brat in annoying specs he’s seemed so far. And as regards the more established characters, I’m loving the Duplicate Girl/Bouncing Boy team more every month – she the drill sergeant, he the still, calm centre; the yin and yang of the Academy.
A couple of issues in and this is already a favourite series. Levitz and Jimenez display a heartening synergy as they update the 31st century for 21st-century readers. Fellow creative team members Andy Lanning (inks), Hi-Fi (colours) and Steve Wands (letters) add their own brand of excellence, making for a confident, comfortable read that excites in the moment while promising a lot more for the future (click to enlarge random, but rather nifty, image). 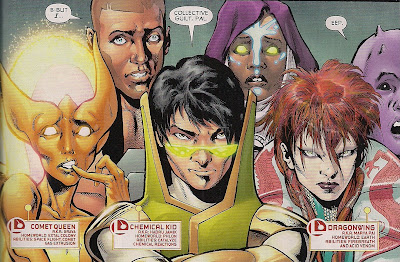