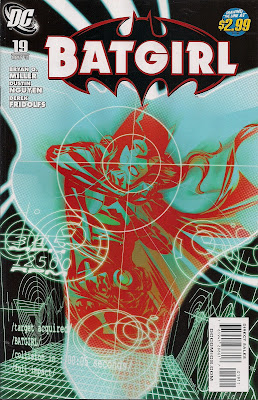 College student Stephanie Brown has her head in her books. But she’s not reading, she’s asleep. The fact that she’s always knackered makes Batgirl the most realistic hero in comics. Attending college during the day and fighting crime at night takes it out of a person without reserves of super-power – the only extra energy source Steph has is her mother’s breakfast waffles. And they look rather heavy.
Steph isn’t the only tired teen this issue, though – classmate Clancy is dropping off too, and for a similar reason; he’s taken to the Gotham rooftops as the Grey Ghost, would-be partner to Batgirl. And it seems he knows about Batgirl’s existing ally, computer expert Proxy.
Proxy herself – aka Wendy Harris, daughter of bad guy the Calculator – is getting used to Firewall, the new base equipped by Batman Incorporated. She’s Steph’s one and only hi-tech helpmate now Oracle has stepped back from being the 24/7 hero helpline. And Babs herself, when she’s not pulling the recently disabled Wendy out of her understandable funk, is busy building a better internet at the request of Bruce Wayne.
It’s all go with establishing the new status quo this month, but there’s action too, as Steph and the Grey Ghost take on Slipstream, a speedster connected to student scumbags the Reapers.
Also on panel is Detective Nick Gage (probably no relation to Bird of Prey in training Misfit, aka Charlotte Radcliffe-Gage, writer Christos Gage or singer Nick Cage), who’s investigating the Reapers’ crime spree and avoiding Batgirl’s ungainly attentions.
I’m actually feeling rather bouncy as I write. That’s the feeling an issue of Batgirl gives me – blame the seemingly effortless banter provided by writer Brian Q Miller. The self-deprecating wit of Stephanie Brown truly distinguishes her not just from any other Batgirl, but from anyone else in the grim grouping that is the Batman Family – this is the book to come to for the fun side of Gotham City.
It’s also, this time, a fine companion piece to Birds of Prey #10, the conclusion to the Death of Oracle storyline. But you don’t need that to enjoy Miller’s smart script (‘Where are you, my beautiful bruise?’) or the expressive artwork of Ramon Bachs – filling in for regular illustrator Dustin Nguyen, who provides this issue’s colourful cover. If you’ve never read an issue of Batgirl you’d easily be able to jump on board here. DC may not be following Marvel with official .1 issues to act as jumping-on points for new readers, but Batgirl #19 easily serves the same purpose. There’s even the odd useful editor’s note, and a lettercol helpfully plugging the first Batgirl trade.
So if you like laughs with your Gotham drama, jump on the Batgirl bandwagon.