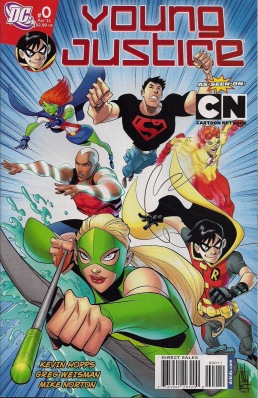 JLA communicator cards on the table, I’ve not seen the new Young Justice TV show, bar the odd clip. It’s not hit the UK yet. But I was a fan of the original series by Peter David and Todd Nauck. I was disappointed when the quirky little comic was cancelled so the main characters could be sucked into a new Teen Titans book which proved far blander than its predecessor.

So I thought I’d take a look at this first issue (though it’s one of those maddeningly billed zero comics). It opens with Robin, Superboy, Kid Flash and Aqualad learning from JLA members that in three days Batman will decide if they can hang out together as a junior superhero team. Not the full JLA – Batman. Why just him, I have no idea. I suppose he’s the king.

Robin is Dick rather than Tim, Kid Flash is Wally rather than Bart-as-Impulse and I have no idea who Aqualad is. I think, from the colouring, that he may be black, meaning he could be the new hero Jackson Hyde, currently in Brightest Day, though their hairdos are very different.
Anyway, that’s not important right now, as Aqualad is barely seen this issue, which focuses on Wally and the newborn clone Superboy, not yet named Conner Kent, as they pass the three long days of waiting. Happily, they get something to do when the super-strong Terror Twins cause trouble in a Central City shopping mall. This pair are new to me, but Agatha Christie fans will smile at their forenames – Tommy and Tuppence.
The skinhead siblings’ thieving activities motivate an engaging little fight, after which the Flash shows up, with a strangely silent Superman, to tell the boys off for, hmm, saving the day. He adds that they should go home and get some sleep because ‘Batman’s made his decision’. Please break off from reading, and salute. Or do the Batusi.
Thank you. The issue ends with the news that the boys can have their gang, under the supervision of Black Canary and Red Tornado, and with the addition of a fifth member. I’m guessing that’s cover girl Artemis (who’s she? An Arrowette/Wonder Girl hybrid?), with Miss Martian showing up later.
I’ll find out soon enough. Meanwhile, this is a decent all-ages book, efficient rather than earth-shattering. Kevin Hopps and Greg Weisman’s script is pleasant, with the best moments going to Superboy. I do like the Terror Twins, I expect they’ll be showing up on TV as the YJ comic is to take place between scenes of the TV show. Good luck with that.
Mike Norton’s characters are bang-on animated model but he doesn’t fall into the adaptation trap of presenting storyboards – this is first-class cartooning, full of panels that burst with dynamic action and sharp ‘acting’. The rich colours of Alex Sinclair add the TV feel, and Travis Lanham’s letters get the dialogue across.
(Oh, and on the basis of their presentation of super-speed action, Norton and Sinclair should be given a speedster strip, stat.)
Young Justice #0 bodes well for the ongoing book. Maybe one day I’ll even see the cartoon …