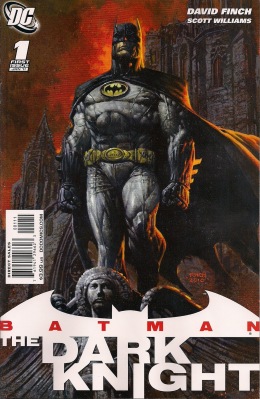 Batman is upset that his long-lost love has gone missing. Julie Madison? Silver St Cloud? No, silly, Dawn Golden.
Oh aye, Dawn Golden, she went to college with Bruce, broke his heart, we all remember her.
Errr …
Anyway, it must have been a more intense than lengthy relationship, as we know Bruce never went to any college for more than a term, being busy travelling the world picking up Vengeance 101 skills. And it must have left a terrible scar, as he’s never mentioned her in thousands of previous appearances.
That’s comics for you. Best just accept that in some recent cosmic realignment or other, Bruce gained a girlfriend (or Daredevil’s memories of Elektra Natchios). And lost a few brain cells.
For writer/artist David Finch kicks off his Batman book with a story in which the world’s greatest detective fails to note that his ex’s name reverses into that of a notorious cult. A cult whose most famed member was ‘world’s wickedest man’ Aleister Crowley. And what’s the forename of April’s father, whom Alfred Pennyworth tells us gave the ‘sullen and aloof’ child ‘a suspect upbringing’? Aleister.
Apart from the opening flashback sequence, Dawn remains off-panel, victim of who knows what, although Killer Croc does basically admit raping her (‘Afterwards she was pretty upset’).
Yeah, Killer Croc again. And at the end of the book, the Penguin again, who, despite the sharpest of teeth, doesn’t add up to much of a cliffhanger.
I suppose there’s nothing inherently wrong with putting a couple of old favourite Bat-villains in the first issue of a book, but neither generate much excitement. Penguin doesn’t seem to be up to much bar protecting his safe from burglar Batman, while Killer Croc is off his scaly head on Venom. And Dawn is a plot-generating concept rather than a person – her name may as well be Betty Maguffin.
A terribly expositional Alfred seems sad that Batman doesn’t want to hang out. Batman risks lives by cutting the power of several city blocks to grease his mission (and forgets he’s meant to be travelling the world setting up Batman Inc). Some melodramatic bums get a page to themselves. And so on.
This is a perfectly competent Batman comic. Finch’s dialogue is a notch above that of many more experienced writers – a scene with Commissioner Gordon and his team comes alive – and he can put together a decent fight scene. Batman’s narration works well, I could believe these are his thoughts, they’re not overwritten. Finch’s pencils look very nice under Jim Lee’s regular inker, Scott Williams (if I’d not known this was Finch I’d have said this was Lee and Williams). I especially like their moody, rain-streaked streets. The new Batman suit looks hideous, so they’re obviously illustrating that properly – why have a sleek, iconic look when we can have a ‘realistic’ fetishist’s fantasy, all seams and codpiece and, apparently, a flashlight on the chest?
It’s all fine. But it’s all generic – while the craft on display is far beyond competent, there’s nothing we’ve not seen dozens of times previously, no unique selling point to justify starting a new title. Even with a couple of coming cancellations there are enough Batman books that a creative vacancy would have come up before long. And when Finch leaves within a year or two, as always happens when books are created to take advantage of a popular creator/massage egos (see Macfarlane’s Spider-Man, Grant and Breyfogle’s Shadow of the Bat and so on) no one would have had cause to ask why the comic continues.
Fine as the internal artwork is, Finch’s cover is ugly as sin, with a fey, fat Batman posing on a piece of masonry (though for once, it’s not a gargoyle, but an angel). Evidently, Finch is a better penciller than he is a painter.
I can’t see buying future issues of Batman: The Dark Knight  unless Gotham PD tackles a subtle mystery set up this issue – what the heck has happened to Detective Harvey Bullock’s hair?