If this is a fill-in, could we put off the main event another couple of years? Paul Cornell takes over as Batman and Robin writer for three issues and produces an instant classic, honouring the tradition of entertainingly psychotic villains while somehow managing to find an original angle.
What that is, I won’t spoil, as the entire issue leads up to a somewhat stunning final page reveal. What I will say is that I can’t recall the last time a Batman story presented such an engaging mystery, one that manages to be fascinating, while pleasingly straightforward. We start on action, as Dick and Damian crash an unusual wedding, move back a few days to see how they got there, and pick up where we left off on the way to the climax.
En route we see a little of Commissioner Gordon’s attitude towards last issue’s assertion that Bruce Wayne funds Batman, and learn that bad guys are already striking at the billionaire through his associates. Best of all, Alfred enriches the often-shallow figure of Bruce Wayne by letting Dick and Damian know that he didn’t treat all his lady friends as Bat-beards.
Cornell immediately joins the ranks of writers who get Damian first time out, and consequently the banter, and conversations, between the newest boy wonder and Dick are a constant delight (click to enlarge). 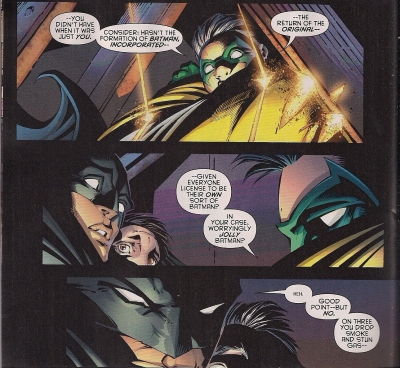 What’s more, the new villain has great promise, introducing themselves with a flourish worthy of the Sixties Avengers TV series.
Helping the story along greatly is the artwork of Scott McDaniel and Rob Hunter. Of all the art jobs I’ve seen from the former, this is my favourite – his trademark dynamism is present and correct, but the layouts are more pleasingly playful than previously. Hunter is sympathetic to McDaniel’s feisty style, while adding a depth of his own. I like this pairing a lot, whether they’re giving us moody shots of the Dynamite Duo by a grave, or Damian showing that he’s fallen under the spell of Alfred’s Earl Grey. Letterer Patrick Brosseau and colourist Alex Sinclair add their own storytelling skills to the mix, helping to create a Batman book that recalls the glory days of Alan Grant and Norm Breyfogle.
Well done to editors Janelle Siegel and Mike Marts for assembling such a stellar team – not forgetting Guillem March, who provides a cracking, vibrant cover illo.
With issue #20, new regular writer Peter Tomasi and penciller Patrick Gleason should be in situ. I expect I’ll enjoy their work, but meanwhile, I hope DC is busy finding more Gotham assignments for this issue’s terrific team.