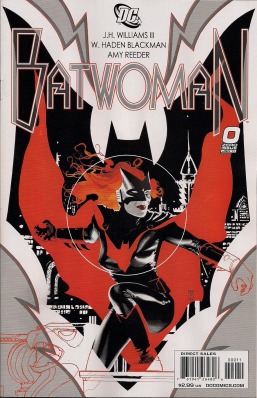 Well, it’s been a long wait, but months after vacating Detective Comics, Batwoman returns in her own book. It’s one of those annoyingly titled #0 issues, with #1 not due until February, but I’m glad to see Kate Kane back in the Gotham night.
Greg Rucka having gone from DC, artist JH Williams takes up the writing reins, with W Haden Blackman co-piloting. Williams also shares his artist’s credit, as Amy Reeder steps in to co-pencil, and hopefully ensure the book appears monthly.
The tweaked creative team steps up in style, providing a solidly entertaining primer in who Kate is, and why she’s taken on the mantle of the Bat. The device of having Batman stalk Batwoman as she goes about her business, in both her identities, plays to the cliche of Bruce Wayne as overbearing guardian of Gotham. And the returned Religion of Crime remains as uninteresting as ever.
But the framework of Batman trying to prove to his own satisfaction that Kate is Batwoman makes for easy and elegant exposition. We’re distanced from Batwoman, but seeing how quickly she gains a measure of respect from Batman strengthens her position as a hero to watch. And I strongly suspect that when her series proper begins, Batwoman will again be our point of view character.
The story has Kate tracking down the cult as they despatch a mysterious sarcophagus out of Gotham via boat. Alone, she can’t stop them, but with Batman’s help … sorry kid, you’re on your own. Batman tells us he’ll intervene if absolutely necessary, but when that moment comes, and tough girl Sister Shard looks set to murder Batwoman, he’s too far away to do any good. Arse. Happily, Batwoman escapes thanks to her own wits and equipment.
A parallel narrative shows us Batman, in several disguises, follow Kate around for weeks while she’s off duty. He finds little clues that point towards her secret life, wonders whether she’s fallen out with military man father Jake, and remembers that cousin Bette was the superheroine Flamebird.
Speaking of flaming, he has a lovely time at a gay club. Purely for research purposes, of course ... 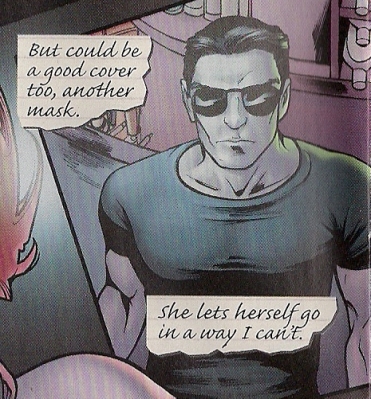 Good Lord, what does he mean? Obviously, someone needs to get out more, then Bruce wouldn’t be the Peeping Tom of the superhero set.
The script is structured so that the Batwoman scenes take up half of each spread, with Kate’s doings filling the rest. Williams draws the former, Reeder and inker Richard Friend the latter. And the technique works very well, with the two styles meshing, and complementing one another. It’ll be interesting to see how Williams and Blackman – known for his Star Wars work, the net tells me – allocate sequences in future, as I can’t see every book being split like this. I’d be perfectly happy for the artists to alternate storylines – Williams may be the bigger draw, but Reeder has her own following due to her work on Madame Xanadu and elsewhere.
My teensy negative criticism on the artistic front is Williams’ tendency to give Batwoman an evil smile, and Reeder’s to supply Kate with big button eyes – the character’s pale colouring already makes Batwoman resemble a vampire and Kate look like a spooky Victorian doll. Said colouring is the work of the exemplary Dave Stewart, who adopts a discrete approach for each sequence, except when Kate leaps into Batwoman-style action and the tones become less impressionistic, more modelled, real. The lettering, meanwhile, is in the hands of the legendary Todd Klein, ensuring the dual narrative fonts are distinct and attractive.
I’m not sure if Todd Klein designed the cover logo, but it’s not my favourite. It echoes Williams’ ornate design work but it’s a fussy masthead on a fussy image, and rather lost.
My big negative criticism is the amount of material presented in this issue – for $2.99 we get 16 pages of story and ‘an exclusive sneak preview at JH Williams’ artwork for the first issue of Batwoman’. That’s an advert, to you and me. Thanks for that DC – I think you owe us an extra-length story, at no extra charge.
Batwoman #0 has whetted my appetie, while also leaving a nasty taste in my mouth. Clever, that.