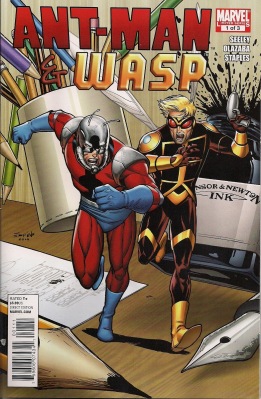 Putting these two together for a mini-series sounded like a gimmick based purely on their names. Which it is, obviously. It’s Ant-Man and the Wasp, but instead of original Ant-Man Pym and wife Janet Van Dyne as the Wasp, it’s Pym calling himself the Wasp to honour his late partner, reluctantly teaming up with the scumbag who stole his size-changing equipment.

So yes, gimmick. But so much more. Writer/artist Tim Seeley plugs directly into current Avengers storylines by setting this opening issue of three at Infinite Avengers Mansion, home to Avengers Academy. That allows trainee heroes Stryker, Veil and Finesse to interact with Ant-Man (hint: they’re not impressed), and teacher Tigra to put him solidly in his place.

Hank hasn’t time to carry out his promised physical with O’Grady, as he’s busy working with Mr Fantastic to stave off an invasion by the (snicker) House of Charnel. This takes a page or so, after which he watches helplessly as a new character connected to obscure Marvel hero Sleepwalker steals one of his inventions. Hank will pursue Agent Anesthesia into the Mindscape and hunt her down with the help of trusted partner Tigra …

… well, that’s the plan. Because the mess is partly of Ant-Man’s making, he stops acting the pillock long enough to beg to help Hank save the Heaven he’s created.

Hank Pym has created Heaven? Sort of – he’s trying to do right by a fallen colleague, and has uploaded their consciousness into an artificial, Utopian reality, giving them a second life, as it were. He’s not about to let AA’s bosses at evil genius secret society AIM destroy it.

This is a lovely comic, a stealth bomb of perfect characterisation and action. Seeley keeps O’Grady on model as a horny buffoon, while giving us glimpses of the better man. Pym comes across as mildly arrogant, but solidly heroic, and ready to give O’Grady the chance at redemption he’s been lucky enough to have several times. The supporting Avengers ring true, the new villain is striking and the surprise appearance of a little-known Spider-Man foe adds to the intrigue around O’Grady. There’s a balance of humour and drama that has me hoping Seeley will write many more superhero scripts, alongside his Hack/Slash gig. 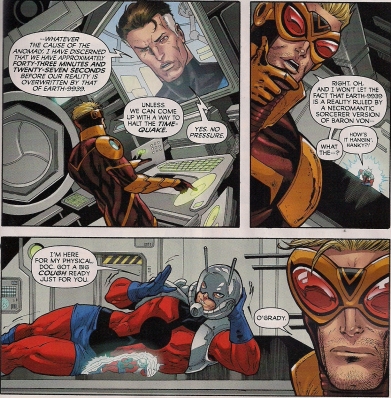 And if he can draw it too, so much the better. His pencils here are a breath of fresh air, evoking old-time Marvel stylings – his Ant-Man is very Jack Kirby – while looking thoroughly modern. The inks of Victor Olazaba complement the pencils well, while Val Staples colours with verve. Great letters, too, from Simon Bowland. The only thing I don’t like, visually, is the Ant-Man & Wasp logo, which looks to have been cobbled together by a ham-fisted mathematician. The cover illo by Salva Espin and Guru eFX, though, is a delight.

If you like superhero comics, but didn’t take a chance on this book, call your comic shop now and have them secrete it away until your next visit. It’s a little gem.