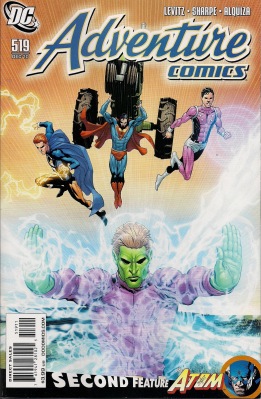 Now that’s a standout cover from Scott Clark and David Beaty. I can’t recall the last time that the power of Brainiac 5 was foregrounded on a Legion book. And I love the smaller figures of Cosmic Boy, Lightning Lad and Superboy, as the Legion of Super-Farmers. Brainy is obviously clearing some land with his fantastic force field … turns out there’s more going on than I knew.

The Zaryan storyline continues this issue with Chameleon Boy, Shrinking Violet and Invisible Kid taking over the Legion’s campaign to bring in space criminal Zaryan. Saturn Girl has previously been heavily involved, but it seems Brainy has grabbed her for a trip into the past.

I like that Paul Levitz presents the early Legion as an organised bunch, with Vi referring to Zaryan as ‘Saturn Girl’s case’, especially given that Imra planned on a police career. Vi gets to be amusing here, something I can’t remember happening in the po-faced, yet fantastic, original Adventure Comics strip. Invisible Kid’s powers prove useful for hiding, but little else; still, he has his days in the sun later. Cham proves the most useful player, transforming into combat-useful monsters at every turn. And Zarjan escapes to fight another day, but we’ve seen another significant moment in the Legion’s history – the birth of the Espionage Squad.

Meanwhile, back in the 21st century, Saturn Girl, Lightning Lad, Cosmic Boy and Brainy have reached a rainy Smallville. Brainy apologises for snatching Imra from the Zaryan manhunt, but ‘it’s imperative that we spend the next 14.4 hours in Superboy’s time’. Don’t ask me why he couldn’t have waited until Imra had wound up her current business, then hit the past – such was the Silver Age. There’s likely some explanation involving relative distances and characters’ personal journeys. I dunno, I just enjoyed seeing Saturn Girl get drenched.

The rainstorm turns out to be the edge of a twister, demanding the intervention of Superboy. After experiencing natural weather – the 31st Century has climate control techniques – the Legion dons ancient clothing to help the Smallville community raise a barn, the team meets the Kents and … this is sounding a bit like a list, isn’t it? Which it should, as this story sees Levitz again use the list-ticking set-up pioneered by Geoff Johns when Connor Kent was the Superboy in this title. A few months back the list was young Clark Kent’s, this time it’s Brainy’s, and the final item on it is the rather impressive ‘Save the world’.

Which he does, with the help of his team-mates, when one of his city-stealing ancestor’s probes arrived on Earth, as the records said it would. Brainy knew that if it sent the message to Brainiac that Earth had cities worth stealing, he’d arrive years before Kal-El was ready to take him on. Brainy wished to ensure records of the probe’s disappearance proved to be accurate.

After royally messing with Superboy’s head the first time they met, it’s good to see that here the Legion are the ones at a disadvantage, as their soft 31st-century ways make them look proper ninnies in front of Lana Lang. The story ends on a blissfully happy note, which makes a refreshing change these days.

This is my favourite instalment of the retro Legion strip so far, with the balance between filling in the blanks of the original tales and all-new material shifted happily in favour of the latter. Levitz has turned in a fine script here, full of incident and character, fitting in with later Legion tales but not dependent on them for its success.

Ignore the cover credits, Kevin Sharpe and Marlo Alquiza aren’t around this issue. The artists are Eduardo Pansica and Eber Ferreira and they do a wonderful job, producing lively layouts and characters filled with personality. The action sequences fair blaze off the page. If DC hasn’t yet assigned an artistic team to the upcoming Legion Academy strip, I hope they consider this pair. They might also nab Blond, whose colours are the icing on the cake. I especially like the way Invisible Kid is depicted when using his power … it’s more interesting than ye olde dotted lines around a white figure. And what the heck, throw in Sal Cipriano too, he’s a dandy letterer.

The Atom back-up strip is also better than usual this time, as we learn more about mysterious Uncle David and writer Jeff Lemire provides corking descriptions as to what trans-dimensional travel feels like and how good men can turn bad. After several months of set-up, it finally feels as if the story is going somewhere. Mahmud Asrar’s pencils, inked by dependable John Dell, carry things along in a jolly manner and colourist Pete Pantazis stylishly differentiates between the story’s settings.

The page count is being lowered soon, along with the price, but for now, Adventure Comics is an entertainment bargain at $3.99.