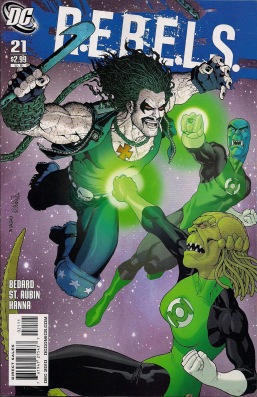 First there was Green Lantern. Then Green Lantern Corps. Followed by Emerald Warriors. And now the GL franchise hits four books, with the addition of R.E.B.E.L.S.

It’s not a Green Lantern book? You could have fooled me, with this issue being mainly a battle between two Lanterns and recently returned L.E.G.I.O.N. operative Lobo. It’s narrated by one of the Corps, Okaaran GL Altin Admos, who has a lot of ‘splainin’ to do to the Guardians of the Universe. Altin even gets an origin here, while we still know sod all about members of L.E.G.I.O.N. who debuted nearly two years ago. Next issue’s blurb promises/threatens a focus on the other Lantern of Sector 2828, Gorius Karkum …

As for actual  L.E.G.I.O.N. characters, Vril Dox and son Lyrl are around, having hogged the spotlight for the last several issues. But the rest? Captain Comet, Starfire, Adam Strange and the other members I can no longer name? They show up for a group shot but don’t get to contribute to the action, or say a word between them.

It’s annoying – bad enough this book turned into the Dox family fortunes, without notorious page hogger Lobo returning. Now the book is seemingly an adjunct to the GL titles. The R.E.B.E.L.S. name even becomes a proper acronym here, defined in relation to the Green Lantern Corps. OK, so Lobo’s ‘Regular Everyday Bastiches Endin’ Lantern Supremacy’ isn’t likely to be officially adopted, but in 21 issues it’s the first attempt at explaining the name.

There were some things I liked. Tony Bedard writes one or two nice moments, such as the Okaaran GL’s good manners in battle and Dox’s manipulation of the media. While not wishing to see it played out at length, I liked Dox’s ‘who died and made you galactic gods?’ attitude towards the Corps. The actual fight choreography is good, bar the fact that GL Gorius may as well not be there. Claude St Aubin and Scott Hanna make a wonderful penciller and inker team, while Rich and Tanya Horie’s colours are excellent. Travis Lanham? Top letterer. And Francis Portela and Javier Mena supply a lovely cover – for a GL book.

I’ve read the L.E.G.I.O.N. series in all its incarnations, and am loath to drop it, but it has, in effect, dropped me. The Legion of Super-Heroes and/or villains for the present day concept has all but gone, as DC apparently bids to cash in on current Green Lantern success. The next several issues are going to see Dox’s so-called peacekeepers in all-out war against the Lanterns, and I couldn’t be less interested. I can see myself skipping them and checking in again if this book remembers what it’s supposed to be about.