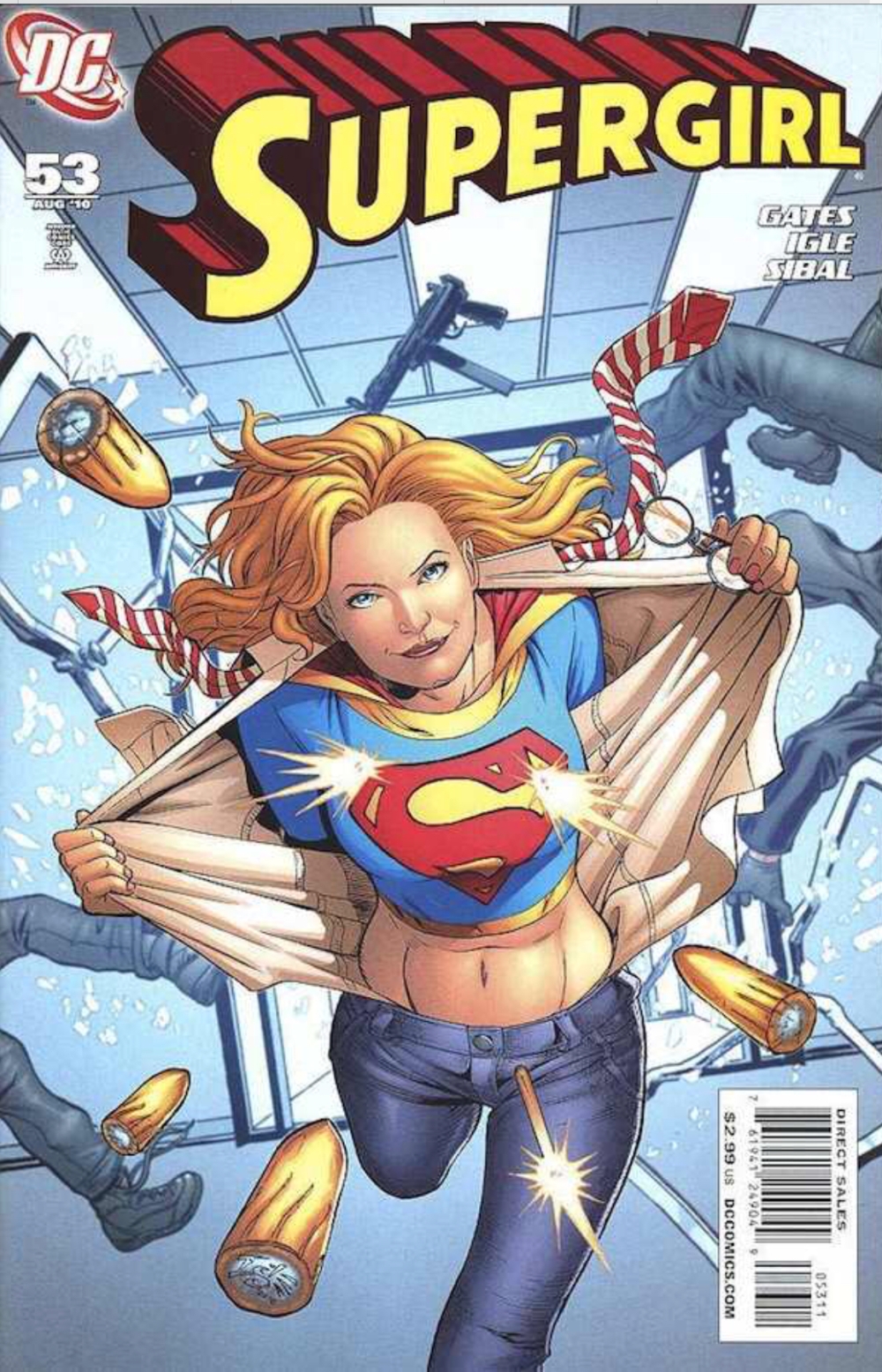 After a long run of Supergirl covers by Josh Middleton, we’re about to begin a series by Amy Reeder. In between, though, here’s an illustration by series artist Jamal Igle. And isn’t it vibrant? Perfectly composed, beautifully executed, it’s a lovely take on a motif perfected by cousin Kal.

Is there something I’m not getting? Any reason why Igle can’t be allowed to give us the artistic lead-in to the series he illustrates so well? Maybe he doesn’t want to do the job regularly …

Inside, Kara isn’t the confident, resolute hero we see on the cover, but I’m fine with that – we’re entering a new period of her life and I’ve no doubt she’ll be this girl soon. Before that, she’s somewhat down. Losing your father, mother and entire planet in short succession does that to a person. Happily, she has Lana Lang to look after her. I couldn’t be happier that after Kara’s shabby treatment of her sorta-adopted-mom in #50, they’ve made up. No convoluted apology scenes, just an off-panel understanding and here, a brief reference to the incident. Great, we can move on – the falling-out wasn’t convincing in the first place.

Kara’s having nightmares with alarming consequences – not just the involuntary heat vision blasts, but her decision to ignore most of her remaining links to Krypton (I’m assuming she won’t avoid cousin Superman’s calls). She wants to be called Linda Lang, rather than Kara, and plans to give up her Supergirl guise. Lana can go along with the one, but not the other, especially when a massive energy blast from Centennial Park resounds through Metropolis. People need the help of Kara – sorry, Linda – and Lana’s going to make her see that.

Already on the scene are STAR Labs employees Dr Light and Gangbuster, the super-scientist and the D-list un-superhero who actually recognises his basic rubbishness, even dressing to complement the fact. They’re in the issue in the first place because Dr Light, Kimiyo Hoshi, is trying to depower the vile Superwoman, under the watchful eye of new security head Gangbuster. Jose Delgado. And while Supergirl’s dithering about using her fantastic gifts to help people, they’re confronted with the big threat for the next two issues, Bizarro Girl.

The final page splash of BG emerging is fantastic – it’s rare that a Bizarro, who should be shocking, actually has the power to disturb. This girl has that. Big time. I can’t see Kara sitting on her Kryptonian arse while this monster’s in town.

Writer Sterling Gates and artist Igle, freed from the constraints of crossovers and events, have a whale of a time here. The book is once again theirs, meaning there’s space for Kara and Lana’s still-new relationship to shine (watch for a lovely bit of business in which Kara subconsciously, sheepishly starts tidying up because Lana’s come into her bedroom). 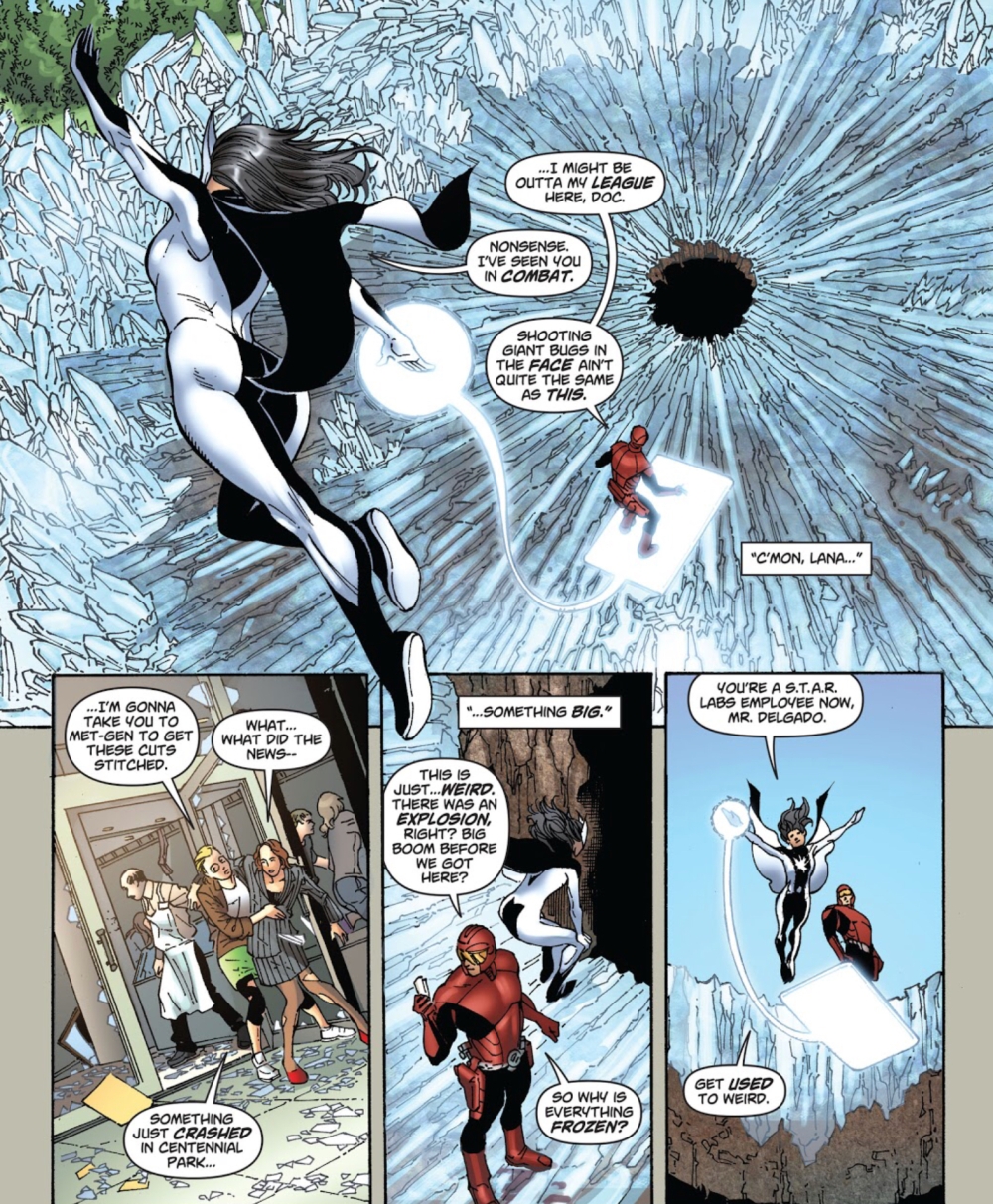 And I’m even OK with a bit of Dr Light and Insomniabuster while we’re waiting for Supergirl’s new college supporting cast to arrive. Dialogue is bright and efficient, the pages – inked by Jon Sibal and coloured by Nei Ruffino – vital. Whether or not it’s a big fight like the one that kicks this issue off, or the understated beginnings of a crisis through a cafe window, it’s all good. I especially appreciate that, like Francis Manapul in the new Flash book, Igle is prepared to go the extra mile and fill his city with people. Supergirl is living an an honest to goodness Metropolis.

This is the Supergirl comic I want, full of its own meaty characters and storylines – all the crossover crutch ever does for this title is make it limp. Let’s hope DC’s assurances that the book can go its own way for awhile proves true.