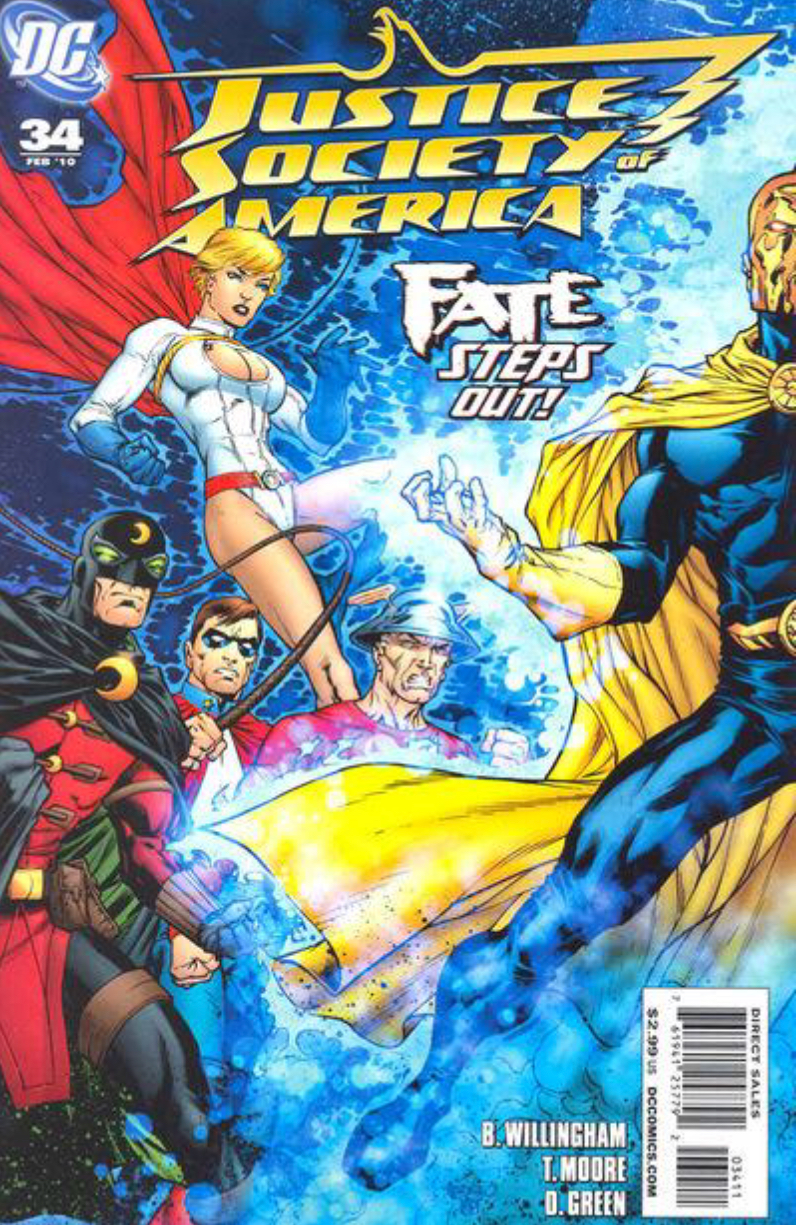 Young Justice, the Doom Patrol, the Legion of Super-Heroes . . . If you’re a super-group in need of a home, the Justice League’s Happy Harbor cave is the place to be. Even the Injustice Gang have taken refuge under the stalactites. And now it’s the turn of the JSA, well, at least the half that hasn’t wandered off after Magog to become meta-marines, or something.

But the Justice Society of Troglodytes aren’t alone, as a mystery Lord of Chaos gatecrashes the latest Dr Fate’s body. Well, he’s too new to have set up defences and he’s not wearing his Lord of Order-filled helmet. The set-up makes for a fun issue as the trespasser has a series of awkward and amusing encounters with the team members before being revealed at issue’s end.

Next issue looks to be fight filled, leaving this as a ‘day in the life’ tale of the type New Teen Titans and Avengers used to do so well back in the Eighties. It’s all about the characterisation, with a cute running gag about Jesse Quick’s marriage, a power upgrade for a newer member and Alan Scott and Jay Garrick dealing with the captive Kid Karnevil. There’s even room for Lightning to show a bit of her personality, something I’ve been wanting to see for a couple of years.

Bill Willingham paces the book nicely, giving each scene room enough to breathe without dwelling too long on each vignette. The personalities of good and bad guys sparkle – I especially like that he can portray Mr Terrific as both a bit of a workaholic and a fella with a sense of fun. The long-running question of Wildcat’s longevity is smartly settled and Jesse is endearingly grumpy. It’s a fine first solo issue for Willingham, with Matt Sturges having gone off to look after the new All-Stars book.

Travis Moore, a new name to me, produces wonderfully clear layouts and gives the players some delightful expressions; most of the team are in civvies throughout but there are no identikit faces here. Veteran inker Dan Green adds his usual layer of crispness, and I’d be very happy to see this team stick around for awhile.

The cover by Jesus Merino, who apparently wasn’t told Power Girl has left the book, looks to be continued next month. I look forward to it, along with the conclusion to this palate-cleanser of a story.