I’m rather pleased to see the Justice Society of America split into a pair of teams, as of late the sheer number of characters has proven unwieldy, with no writer of today seemingly willing or able to share out the panel time in the way classic writers of similarly sized team The Legion of Super-Heroes did.

This book focuses on the trainees, with Power Girl and Magog in charge of Wildcat III, King Chimera, Cyclone, Citizen Steel, Judomaster II and Damage. Hourman II is also an instructor, and Stargirl cheerleader in chief. It could be that some of the throng I mentioned are also trainers rather than -ees, surely the oddly named female Judomaster knows how to fight, for one? It’ll all be made clear, I’m sure – writer Matt Sturges starts filling in the details of the new regime once the team reaches their fresh HQ, a ranch in New York State. Before and after that the kids battle two nondescript villain teams sent to take them down in the wake of the recent multi-super-villain attack in the parent book.

This is entertaining enough, but the best scenes of the issue see members enjoying a spot of R&R while trying to come up with a name; a conversation between Stargirl and Powergirl; and training scenes which see Magog’s bullish personality toned down to acceptable levels.

Sturges does a wonderful job ensuring everyone has a moment or two while progressing the ‘how come no one attacks Stargirl?’ storyline. The answer comes at issue’s end on a final page which could have been drawn a bit more clearly by Freddie Williams II. There are a few apparent teething problems in places this month, but I can’t fault his enthusiasm – there are no lazy panels here, as Freddie fills every inch with people, robots, rubble . . . and Power Girl’s tits.

Lord, I was going to stop remarking on Peege’s boobs, but when an artist is so keen to show that he has a compass and knows how to use it, what’s a fella to do? I give you exhibits A), B), C) and Double-D):

GET A GRIP, MAN. Or at least even things up with lots of prominent shots of the biggest male member (that would be the currently missing Atom Smasher, I suppose).

Mind, to show he’s not entirely a breast man, Freddie does give us this: 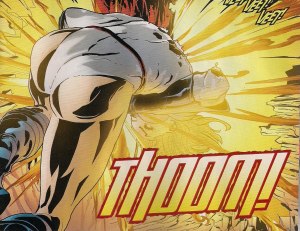 I reproduce it only because it’s pleasingly Kirbyesque in its shading.

Oh, and Peege’s costume gets ripped not once, but twice. Power Girl has worked for years to get a bit of respect in the superhero community, and she’s recently become a JSA leader, so please Freddie, don’t strain to shove Karen’s breasts in our face. Some of the panels I reproed look really awkward due to the overemphasised decolletage. If we must have a team sex kitten, Wildcat III is a natural.

Kudos to the creatives for adding characters not on the announced roster, Sand – who’s not had a decent scene for what seems like years – and the original Hourman, who delights with his willingness to insert ‘pickle’ into a sentence.

Art quibbles aside, this is a belter of a first issue for an angle with a lot of promise. Straight off it’s made clear that, despite the team name brainstorming session, this isn’t yet another ‘taking the fight to the bad guys’ book; it’s about proper training for a new generation of heroes, the stated intent at the start of the most recent Justice Society run. I’m excited to see where this will lead.