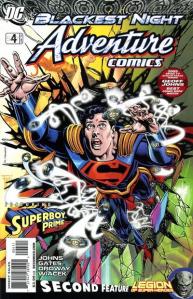 Love Jerry Ordway’s art as I do, I must admit initial disappointment at seeing he’s subbing for Francis Manapul this issue; Manapul’s melancholy stylings, aided by colourist Brian Buccelatto, have given Adventure a pleasing, unique tone these last few months. The latter is on board here, laying down both pre- and post-Crisis tones, and it’s interesting to see how he looks combined with Ordway and inker Bob Wiacek. Overall, the art is very nice – in fact, it’s probably better suited to this month’s script which, rather than the usual pastoral work, demands something more bombastic.

What else would be required when fists-first buffoon Superboy Prime is starring. Note to the whiniest Clark Kent in the Multiverse: pointing out that everyone thinks you’re annoying doesn’t make you less so. And while I can see you, don’t pretend you can see me or you’d be sobbing because when you were on the Page 1 splash, I was making a splash of my own, on the bog. Let’s just say I was getting you out of my system.

(Oh dear, what a tacky little review this is! Still, now I’ve established Superboy Prime isn’t real, I can stop addressing the no-mark directly. Part of the problem with this fella is that he’s impossible to take seriously.)

I laughed at the title of this issue, ‘He primed me’ and it turned out to be appropriate as the Black Lantern corpse of Alex Luthor shows up on Earth Prime to repower Prime, the better to feed off his teenage rage. Before you know it he’s back in those peculiarly piped metal control pants. And still moaning. Well, he’s been reading recent DC Comics – this issue in fact – and wonders where it will all end (goodness, he IS just like me!). This makes his surprise at the appearance of Alex Luthor surprising in itself, but who knows how these things work . . . perhaps the details of the Adventure Comics he read were slightly different until his actions here firmed things up. Best not to think about it.

We still don’t know if Prime killed his old girlfriend Laurie, as previously hinted at, though a picture of her fancy dressed as Superman’s mermaid ex Lori Lemaris hints that she’s sleeping with the fishes. His parents are understandably terrified that their brainless brat might vaporise them but there is a moment of twisted hope for their relationship here.

Sterling Gates joins Geoff Johns on scripting duties for a story which offers such delights as ‘I like you when you’re angry’ and ‘Because I demanded it’. Cheesey, yes, but very suited to a story featuring twisted fanboy (yeah, thanks Geoff) Prime. The addition of Black Lantern Luthor makes for one of my favourite tie-ins yet – the guy is fun, wanting nothing more than to use Prime and annoy him along the way. Plus, he looks a lot better defleshed than he ever did with skin (the loss of the ginger perm helps).

Veterans Ordway and Wiacek’s combined line is rich and powerful – these are not men liable to make bad storytelling choices. They’re so good, in fact, that the emotions on Prime’s face almost had me feeling sorry for them. But not quite.

The recently designated Earth 1 Legion of Superheroes have a cameo and if they show up next issue to join the battle between Prime, Alex and his cadaver crew, we’re in for a fun ride. If it proves to be the final Superboy Prime story, all the better.

A version of the Legion also occupy their usual back-up slot in a story which just doesn’t work. Following on from the sturm und drang of Legion of Three Brain Cells, we have Blok, Dawnstar and Wildfire popping over to Sorcerers’ World to see how the former White Witch, Mysa Nal, is doing now she’s black. There, Mysa sorts out some health problems Blok’s been having, tells him that his staying with her will help her stem the newfound darkness in her soul, and Blok stays. No surprises there, though some confusion – why does Mysa turn back into her old White Witch self briefly? Is it a visual cue that Blok has a purifying effect? I dunno, but even for a short this didn’t account to much, being a journey from A to B with none of the speedbumps a dramatic story needs.

The cover has an intense Prime at its centre, but it’s far too busy, what with Blackest Night trade dressing, three logos, credits and an extra puff for Geoff Johns because something called Spike TV likes his work. Plus, it’s set against a splintering previous cover, what with Prime being Billy Metafiction. Too much, man!