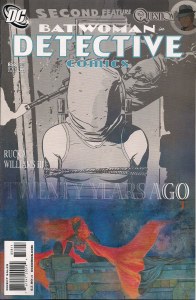 The Batwoman, who she is and how she came to be. That’s the premise of the new story arc in Detective and thank the Lord – it’s been a couple of years since Kate Kane began swooping around Gotham, I’m ready to know why she took up the mantle of the Bat.

This first part gives Kate a tragic loss to match that suffered by young Bruce Wayne. But where he lost his parents to crime we see that she, two decades ago, lost her mother and twin sister to terrorists.

But is sister Beth still alive and reborn as lunatic villain Alice, Batwoman’s adversary in the first four-parter? That’s what Kate’s trying to find out here, carrying out a comparative blood test.

The flashback scenes show a good childhood – not idyllic, as the Kane twins weren’t always fans of the life of the army brat, which two parents in the service made them, but not half-bad. It’s sad their childhood came to such a sticky end.

Greg Rucka writes the family life wonderfully well, and the scene of their father in, I suppose, the Gulf War, convinces – it’s the military/spy speak Rucka does so spiffily that to me is pure Miss Othmar; I can’t make head nor tail of it, and you can tell Skylight and Cloudbreaker I said so.

In the present we see a little antipathy between Commissioner Gordon, whose men are trying to find the body of Alice, and the military, as represented by Colonel Kane (that seems to be his first name). Well, when there’s never been a military presence in Gotham in 70 years, would you want them coming in and taking over your crime scenes?

All credit to Rucka for keeping the worst of the violence not so much off-panel as in the dark. We don’t need to see the bloody details of the torture and murder here, as Alfred Hitchcock said, it’s the stuff you imagine that’s most frightening. JH Williams does a superb job (likely with the assistance of legendary letterer Todd Klein) in placing the sound effects and balloons.

It’s an imaginative layout in a book full of them, with only one not working – the docks scene’s jagged panels don’t guide the eye across the spread as they might. Williams uses a variety of styles – rich renderings for the present scenes, a vaguely Joe Kubert style for our army at war, and a simple, impressionistic line – it’s a little Michael Lark – for the twin sequences that makes the violence all the more powerful when it occurs.

Oh, and Williams proves himself unique in drawing a Paris street and not dumping the Eiffel Tower at the bottom of it. Bravo, mon frere.

Colour artist Dave Stewart proves himself a versatile chap too, matching his skills against those of Williams for a perfect finish. His contribution to the art deserves a cover credit.

While the Batwoman segment left me wanting more, the Question strip here left me wanting less. Well, none, actually. Rucka’s writing here lacks the spark evident in the main feature, while the excellent Cully Hamner isn’t asked to draw anything very interesting. The conclusion to the first five-parter is just more of the same – Renee Montoya in a face mask busting chops to rescue a young woman kidnapped for prostitution. I admit, if this happened to you, you wouldn’t find it boring, but in a world of weird villains and dastardly plots, it’s terribly mundane.

And I remain to be convinced that the Question is the best role for Montoya. As a Gotham City cop she went through a huge range of emotions, all of them etched on her face. Now she’s wearing a mask most of the time, so is rendered expressionless. And instead of pursuing her own passions, she’s filling a dead man’s shoes. Renee the cop was fascinating, Renee the Question is dull.

Happily, Greg Rucka’s a first-class writer, so with luck, now that he’s established the sort of thing the new Question does, he can let more of Montoya shine through.