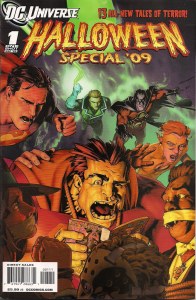 Halloween specials are always mixed bags, full of more tricks than treats. But DC has another crack at scaring the bejabbers out of us with ’13 all-new tales of terror’. That would be hype, as some of the tales are played strictly for laughs and are none the worse for it. On the whole, though, I prefer my All Hallow’s Eve tales to be veritable spookfests. Let’s see how the strips here deliver . . .

The issue is bookended by a tale of the Bizarro world, with Bizarro No.1 hating his worst holiday. Or something – I can never manage Bizarro-think. Anyway, Jake Black’s script is delightful, never trying too hard, while Ibraim Roberson does a nice line in Bizarro-American Gothic. There’s even a Bizarro Dan DiDio (presumably he allows a storyline to end).

We then see Guy Gardner organising a Halloween party at his bar on Oa, inviting his GL pals and having fun with girlfriend Ice. It’s featherlight stuff until a subtle shift in tone shows us Guy’s childhood Halloweens, providing an insight into how he became the man he is today. While it’s well done by writer Adam Schlagman and artists Mark Bagley and Ray McCarthy, I’d rather it had been done elsewhere – the realistic feel to the flashbacks is at odds with the rest of this 80pp giant. I’ll take a fun frightfest over a psychological insight into something that doesn’t need explaining – I’m fine with ‘sometimes Guy is a bit of an arse but he really, really loves Halloween’. Bagley draws a great Kyle Rayner, he’s the first artist in years to remember that the Green Lantern is part-Mexican and isn’t meant to look like just another middle-American. Kyle, of course, is an artist himself, and the costume he designs this issue shows he’s one sick puppy. Oh, and a demerit for overuse of an obscure-outside-the-US TV reference. Ginger and Mary Ann indeed!

Duncan Rouleau contributes a single page Creeper strip and, as ever, that’s quite enough of this annoying character for me. I liked that it was basically a Mad Magazine gag page, but it was more hit than miss.

Creeper shows up again over the page in a story of the new Outsiders. Alfred tasks the team with stopping the rebirth of Mary, Queen of Blood from the fabulous old House of Mystery I . . . Vampire strip. It’s written by DC editor Michael Siglain, who shows that he really should be writing more, as this is the best outing yet for the Outsiders. It’s a tight wee tale which utilises good teamwork, supplies fine dialogue and a terrific ending. And as Siglain celebrates Halloween he also sticks to a newer tradition – Halo gets but a single line. Never mind, this story works, not least because of the spookily stylish artwork of Kelley Jones, who does shadows like no one else. Particular pleasures of this strip include a smart use of Black Lightning’s powers to tackle some rather familiar familiars and some clever namechecks for Hammer Films fans.

Tiny Titans creators Art Baltazar and Franco Aureleiani provide a short but sweet tale of the Batman Family’s Halloween bash being crashed by Killer Moth. Set shortly after Barbara Gordon’s debut as Batgirl it’s a fun tale which shows once again how cool Alfred is, as he helps save the day after giving Bruce Wayne a thorough dad-lecture. Sergio Carrera’s art has a wonderful newspaper strip quality to it, clean but never dull. Colourist Marino Lucas Morales deserves a shout-out for his unshowy, but thoroughly effective colouring job. Together, the creators show that a Batman story doesn’t have to be a 74part epic to be any good.

In the first solo tale I’ve seen with him, latest Robin Damian Wayne takes on a terrifying new villain, Sugar Tooth, whose origin makes an awful lot of sense for a Gothamite. Writer Derek Fridolfs captures Damian’s voice well, and his inks look as good as ever on Batman: Streets of Gotham partner Dustin Nguyen’s crisp pencils here. Damo’s narration provides my favourite line of the issue: ‘Or maybe just another clown-related curse running through this cesspool.’ That kid’s so noir!

Then we get another Robin, the Red one, and interestingly chunky art from Matt Triano. Ariel Thomas’s script, though, while fine for what it is, is another exploration into Tim Drake Wayne’s heart of darkness. I love the Janitzio setting but I’ve just had enough of tortured Tim. If any kids come to his front door trick or treating he’ll be straight in there with a lecture about the evils of candy. Cheer up chum, we get the angst in your own title, this is a holiday special.

Ravager bores the tits off me, and I’d not be at all surprised were her second feature in Teen Titans to be the first to be replaced by something new. But I loved Amy Wolfram’s one-page script, it’s a little gem of genius, decently drawn by Pow Rodrix and Marlo Alquiza.

The next story is equally good, and longer. It’s a Kid Flash story (Bart has a nice Impulse-style new logo) in which Mirror Master takes on a Candyman style legend. Bart doesn’t have much to do, and is no fun at all, but this strip delivers the most potent Halloween punch. Author Joe Harris and illustrator Andrei Bressan make a moody team, providing the book’s best climax.

Beast Boy shows up for a single pager. He wants to trick or treat but Cyborg says hes too old. An instant un-classic from Amy Wolfram (it says Wolfman on the story credits – someone has too much spooky spirit). Still, she did do the impossible and make me like Ravager. The art by Jon Boy Meyers is a lot of fun.

There are more Teen Titans in the Wonder Woman story, in which the Amazing Amazon watches some Blair Witch style reality TV and gets the shivers. When she sees Wonder Girl, Aquagirl and Miss Martian head for the area seen in the show she’s a tad concerned. The ending is predictable and exactly what I wanted, so well done to writer Mandy McMurray and artists Scott Clark and David Beaty. This story is also a notable moment in comics history for being the first time the ludicrously designed Titans Tower looks good.

I do get terribly bored by Superman Vs Flash races, as no result will ever be definitive and besides, I just don’t care who’s fastest on any given day. But the story here has considerable charm, especially in a moment involving Superman’s cape. No referee is needed to declare Billy Tucci’s story and art a winner.

Lois and Clark offer three young guys a swinging session in the next story. Just look at this!(Click to enlarge)

Well, that’s how I read “Daphne’s” proposal. It turns out Superman and wife just wanted to mess with their heads in a sweet time passer by writer Joshua Williamson and artists Peter Nguyen and Marlo Alquiza.

And then it’s back to those Bizarros for an amusing wrap-up to the first story.

The book is beautifully designed by letter artist Steve Wands and there’s a peach of a cover by Gene Ha (which reminds me that I still can’t tell the difference between Red Robin and Dr Midnight at a glance – am top Bizarro comics critic).

Congrats to editors Eddie Berganza and Adam Schlagman (I knew that name sounded familiar!) for an impressively varied collection of stories, and getting often splendid work from a lot of creators I’m assuming are new to the BBC big leagues.

So, a better than usual Halloween Special. Now, where’s Santa . . .