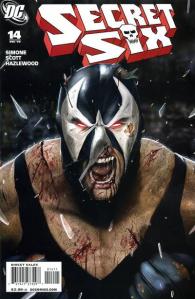 Too many comics these days promise a graphic novel-length saga that’ll knock our socks off, but after building the adventure, bungle the payoff.

Not Gail Simone in this fifth instalment of Depths, which has seen the DCU’s motley mercenaries fighting for, and against, a modern day slaver. And more frighteningly, the dark beast Grendel, who wants nothing more than to eat the tasty morsels laid before him.

First said morsel this issue is guest star Wonder Woman but, unsurprisingly, she lives to see another sitting. It’s actually a bit cheap, how she survives; just as Diana is about to be gobbled up, Smyth asks if he wouldn’t mind awfully killing a few of the Six first . . .

But full marks to the writer for delivering answers to questions asked and unasked, throwing in plenty of twists, a logical ending for one team member and a riddle or two for another day.

I liked included Jeannette’s reason for hating Amazons – it makes sense that the longer-lived folk in the DCU have opinions on immortals (even if she doesn’t seem to know the difference between a Themiscyran Amazon and a Bana). The scene between Bane and Scandal Savage proceeded nicely from groundwork laid in previous issues – he proves that no matter how dangerous, he’ll always come back for her, whereas she doesn’t have the proper amount of faith in him; she considers that only the monstrous, venom-packed Bane can save the Six. While Bane remains as courtly and polite as ever, it’s safe to say Scandal’s attitude comes back to bite her on the bottom by issue’s end.

The marauding Amazons look suitably fierce as drawn by the art team – I don’t want to think about what Artemis does with those knee spikes.

The most satisfying snippet of information here was the past of Smyth’s rogue Amazon, Giuana. It turns out that she’s as sick as you’d expect from a Secret Six villain, and a worthy foe for Catman and Jeannette. The latter’s big psychological weakness comes into play here – she really should go full-on banshee a bit more often, protect herself.

As barmy as Giuana is, Smyth matches her, seriously believing that his motives are as pure as his Mr Rourke suit, but Fantasy Island this ain’t.

The wrath of Ragdoll, Grendel’s family history lesson, Artemis’ order to grab the wounded and dead – I loved it all. What I wasn’t keen on was the onetime Wonder Woman’s willingness to kill her sisters herself rather than let Smyth win. Nah . . . it’d be suicide run all the way for Artemis and crew, if they die, they go out fighting.

Mind, this surprising scene did lead to my favourite line this issue, as Diana shows up and comments: “Brave Artemis. You are filled with death glamour.’ Too bloody right. And seeing the effect her presence has on Artemis was a delight – the younger, brash Amazon suddenly feels safe enough to just grab a hug and voice her feelings. Yes, she’s a gutsy warrior woman, facing down her leering captors while at her lowest, but she’s rounded enough to show vulnerability in the face of the greatest Amazon of them all.

The demands of a continuing series means, though, that Diana must let the Secret Six get away, despite knowing that they’ve killed US government-affiliated prison guards by the score. We see Diana bowing to Scandal’s weasel words, as the killer tries to justify the Six’s actions, but really, it doesn’t make sense for Diana’s character. I’d rather Diana was taken out briefly by someone, or distracted, and the Six just fled. Logically, now they’re on Diana’s radar she should devote a good deal of her time to shutting them down. Which may be the plan, but I doubt it – Diana has guested and must return to her own book, and her assigned conflicts. I can live with that – it’s comics, innit?

As always, the art is fantastic throughout. Regular penciller Nicola Scott shares layout duties with illustrator Carlos Rodrigues, while inkers Doug Hazlewood, Mark McKenna and colourist Jason Scott keep the artistic transitions smooth. There are as many character moments as there is action in this meaty issue, and the team ensures we miss not a nuance. Some of the action I’ve already mentioned, but I can’t not pick out Scandal and Bane’s short tussle with Grendel as one of the most satisfyingly intense fights we’ve seen in awhile. The issue is topped by another stunning Daniel LuViso cover.

If you want conflict – physical, emotional and moral – you’d be hard-pressed to better the Secret Six in Depths.