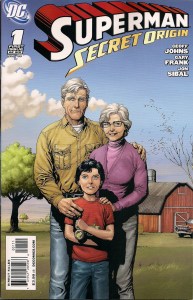 When I was a young Superman fan I was thrilled to learn that Clark Kent’s Earthday – the date of his arrival from Krypton – was June 18 . . . my birthday. This comic wipes out that piece of magic and reassigns the event to December 1.

Knowing writer Geoff Johns’ love of the Superman movies, I expected to find the new date was the day star Christopher Reeve came into the world. Well, it is indeed the birthday of an actor from that series. Richard Pryor. Which made me laugh.

No doubt December 1 has some significance to someone involved with this book, which is one of DC’s most-hyped projects this year. It comes with stiff cover, extra pages, just like the last time we had a mini looking at Superman’s early years, Mark Waid’s Birthright. But I won’t compare and contrast, for this is Superman for a new generation – well, it’s been five years and that was the time for audience turnaround in the olden days. OK, so now it’s about 30 years …

So, the stiff cover. It’s very dull. Ma, Pa and ickle Clark Kent, standing on the old farm. Cliched as these concepts are, it needs a colour hold image of Krypton exploding, or Superman as an adult – something to make the image interesting. Even something as subtle as Clark’s eyes reddening as heat vision arrives would be something.

That scene’s in the book. As is the injuring of a pal while playing. And the revelation of Clark’s origins. All the usual stuff is here, with nary a tweak to the legend. Jor-El has a beard, but Johns and Richard Donner gave him that ages ago. Chloe from TV’s Smallville has apparently signed Pete Ross’ plastercast, which is an inconsequential tease.

The biggest change here is that Martha Kent now designs the Superboy costume as a result of seeing Jor with the El family crest, and holographic Kryptonians wandering holographic streets. I always liked that Martha came up with the S-symbol, but we’ve been stuck with Jor-El wearing an S since Superman: The Movie, and as long as the comics are wrong-headedly reflecting that, the writers have to explain it.

There’s more explanation with regard to Clark’s glasses. Used to be that on starting his Superboy career the Kents came up with the glasses as a way to reinforce a meek persona. Over the years DC has told us the glasses were a focus for secret-ID protecting super-hypnosis, and that they dial down his unusually blue eyes. Now they absorb any stray heat vision blasts, which tend to emerge when cute Lana Lang excites Clark. I don’t want to think about that.

A nice subtle touch here is that when the heat vision first ignites, a shocked Lana drops her book on the laws of physics. There’s also a wonderful image evoked of Martha trying to cut Kryptonian blankets with a chainsaw. And a wee reference to Dr Erdel, from J’onn J’onnz’ origin story.

Lex Luthor is on hand, being clever and creepy. Pete Ross is here, expect a sodden tent very soon. And green kryptonite shows up.

What isn’t here is any great originality. I accept that this isn’t really possible with Superman’s origin – change the big details and people complain, alter little things and folk say why bother? Well, Johns limits himself to the tinkering option and ‘why bother?’ it is. This is a thoroughly competent comic book; Johns writes a decent script, Gary Frank and Jon Sibal make the book look great. Honestly, dullness has never looked so good. Reading Secret Origin, I kept expecting one big idea, something to justify another recap of the Superman legend. But there’s nothing here. The book reads like a vanity project, as if DC indulged Geoff Johns with the time and space to tell his version of the story, one which will remain definitive for, ooh, months.

Perhaps the story will begin popping next month as the Legion of Super-Heroes shows up – their first encounter with Clark Kent is a story begging to be reinterpreted with modern sensibilities. I hope so, or this book will be filed under non-event well before (grrrr) December 1.